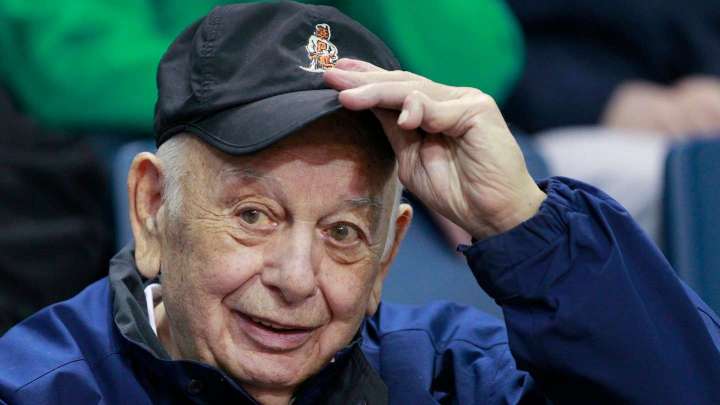 The first time I appeared on ESPN’s “The Sports Reporters” was March 19, 1989 — two days after Georgetown and Princeton met in a historic NCAA men’s basketball tournament game.

Georgetown won, 50-49, surviving when Alonzo Mourning got his hand on a last-second 15-foot jump shot taken by Princeton center Kit Mueller. It appeared that Mourning got a piece of Mueller’s wrist, but there was no call, and the Hoyas escaped.

That Sunday morning, host Dick Schaap turned to me to open the show and said, “Did John Thompson get out-coached by Pete Carril on Friday night?”

“Yes, he did,” I answered. “But everyone gets out-coached by Pete Carril.”

Four days later, when I showed up on the practice day for the East Region semifinals in the Meadowlands, I ran smack into Thompson as he was walking onto the court with his players. When he stopped directly in front of me, I knew I was in trouble.

“I heard what you said on that TV show about Pete out-coaching me,” he said. “It’s about damn time you said something that was true.” He was laughing now. “You’re right. Everyone gets out-coached by that little SOB.”

Princeton and Carril — who died Monday at 92 — lost that night, but the game is seen as one of the most important in NCAA tournament history. Then — as now — the powers-that-be in the sport were talking about eliminating automatic bids for one-bid conferences to give more spots to power conference schools.

Princeton’s oh-so-close loss was later dubbed “The game that saved March Madness” by Sports Illustrated. All the stunning little-guy upsets that have come since then — including the Saint Peter’s run this past season — grew from Carril out-coaching Thompson that night in Providence, R.I.

Thompson’s respect for Carril was already well known: He had sent his son John III to play for him. He liked the idea of a Princeton degree for his son. He loved the idea of him playing for college basketball’s Yoda.

At 5-foot-7, constantly rumpled on and off the court, Carril actually looked a lot like Yoda, and he trained his young Tigers to play as if the Force was with them — even when the opponents came loaded with Darth Vaders in the form of future NBA players.

They ran his Princeton offense, which made defenses dizzy because one misstep would result in a backdoor cut to the basket for an open layup, often with the shot clock under five seconds. When the three-point shot arrived in 1986, Carril adjusted to include pop-out jumpers from the wing, and the offense became even more dangerous. Cut off the backdoor pass, and you might find very good shooters killing you with threes. Take away those threes, and you were back to getting repeatedly beaten for layups.

Carril finished with 525 wins and 273 losses in 30 seasons in an era in which teams played far fewer games than they do now. He coached for one season at Lehigh, where he had the only losing record of his career, going 11-12. During the next 29 years at Princeton, he won 13 Ivy League titles and finished lower than third once. In 1975, when the NIT was still a big deal, Princeton won the tournament after finishing second to Pennsylvania in the Ivy League.

In 1996, his final season, Princeton had to play archrival Penn in a playoff game to decide the league title and automatic NCAA bid. Princeton, which had lost to Penn eight times in a row, won in overtime after Carril, with his team in foul trouble, switched to a zone defense — which he loathed.

Afterward, he went to the whiteboard in the locker room and wrote: “I am retiring. I am very happy.”

He wanted his players to know first.

Five days later, they faced 1995 national champion UCLA in the first round of the NCAA tournament in Indianapolis. As with the Georgetown game, the opponent was bigger, quicker and more athletic. But Princeton controlled the tempo all night. Even so, the Tigers trailed 41-34 with five minutes left. UCLA didn’t score again.

During a timeout with the score tied at 41, Carril told freshman Gabe Lewullis to expect to be stopped the first time he cut to the basket. Sure enough, UCLA’s Charles O’Bannon was waiting for him. Lewullis returned to the wing, then, as his coach had instructed, made the cut again in the final seconds. This time, O’Bannon wasn’t ready, and Lewullis caught a perfect pass from Steve Goodrich and laid the ball in for the winning basket. Princeton won, 43-41.

O’Bannon was one of four players on that UCLA team to play in the NBA. Lewullis is now an orthopedic surgeon. That evening, he was a Jedi Knight following Yoda’s instructions.

That was Carril’s last victory — in the second round the Tigers lost to Mississippi State, which ended up in the Final Four. Carril went on to work as an NBA assistant coach for 10 more years, installing the Princeton offense in Sacramento during the most successful era in that franchise’s history.

When he finally retired for good, Carril frequently made trips to D.C. to watch two of his former players, Thompson III and Mike Brennan, coach at Georgetown and American.

“He loved taking guys aside in practice and talking to them about their game,” Brennan said. “He worked with our stars, but he also worked with anyone he thought he could help play the game better.”

There was no better example than an AU player named Gabe Brown, a 7-foot-1 kid from Long Island. Brown came to American in 2014, so thin he looked like a middling breeze could blow him away.

Carril took one look at him and made him his project. He labeled Brown “the impossible dream” and “never stopped trying to make him better,” Brennan said.

College coaches often have trouble getting into the Basketball Hall of Fame because it is so NBA-centric. Carril was voted in the year after he retired from Princeton.

Reporters didn’t even mind being lectured by him — which also happened often — because they understood that they were learning and that it was an honor to have him take the time to lecture you.

“It meant he thought you had the potential to learn,” Brennan said. “That was a big deal.”

Carril loved nothing more than talking to coaches young and old about basketball. But anyone who was around him learned something: from John Thompson to Gabe Brown and everyone in between. And while there were coaches who won games from him, no one ever out-coached Pete Carril.