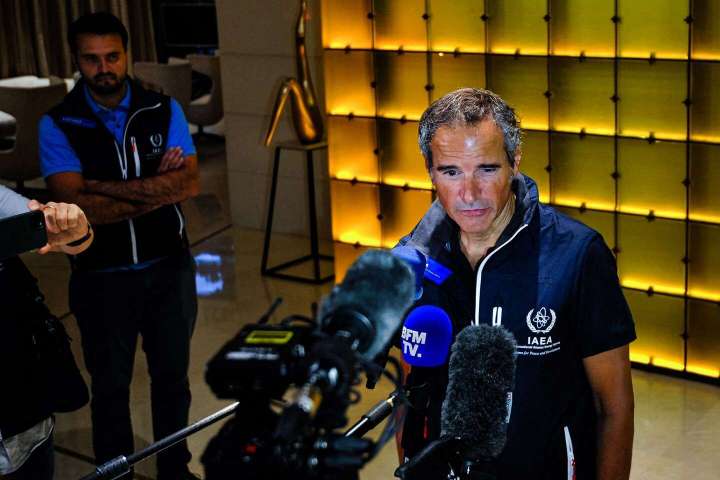 KYIV, Ukraine — A team of U.N. nuclear experts arrived in the city of Zaporizhzhia on Wednesday ahead of a visit to Ukraine’s embattled nuclear power plant, the culmination of six months of painstaking international negotiations aimed at preventing a catastrophe at the facility.

“We are going to a war zone,” said Rafael Mariano Grossi, director general of the International Atomic Energy Agency, whose team of more than a dozen experts will inspect a Russian-occupied plant that has experienced artillery shelling and power outages, among several other challenges, in recent months.

Grossi said the goal of his multiday inspection was to set up a permanent monitoring mission at the plant, “assess the real situation there” and to help “stabilize the situation as much as we can.” He also plans to interview the plant’s workers, who Ukrainian officials say have been subject to intimidation and abuse at the hands of Russian captors who control Europe’s largest nuclear power plant. Two Ukrainian plant workers have been killed in the shelling around the plant in the past month.

“That’s one of the most important things I want to do, and I will do,” Grossi said.

What to know about Ukraine’s Zaporizhzhia nuclear power plant

A senior Russian diplomat endorsed Grossi’s push for a permanent presence at the plant on Wednesday, though Kremlin-installed officials in the region downplayed the scale and scope of the mission. Yevgeny Balitsky, the Moscow-installed governor of the Zaporizhzhia region, told Russia’s Interfax news agency that the goals of the mission were “vague” and that the inspection of the facility would not need to last longer than a day.

Ukrainian officials have called on Russian forces to vacate the plant and accused them of firing mortars at the site and seeking to disconnect the facility from Ukraine’s power grid. Russian forces have refused to leave, saying they are there to ensure the safety of the facility; they have, in turn, accused Ukraine of shelling the plant.

When asked by a reporter if there was any hope to demilitarize the plant — Grossi said it was a matter of “political will” in the countries involved in the conflict “in particular, the Russian Federation.”

“My mission is a technical mission,” he told reporters after arriving in Zaporizhzhia. “It’s a mission that seeks to prevent a nuclear accident.”

Grossi said he received explicit guarantees from the warring sides of safe passage to the facility in southeastern Ukraine, a contested area that has been the target of intense artillery barrages between the warring forces.

“We are going to occupied territory, and this requires the explicit guarantees, not only from the Russian Federation, also, from the Republic of Ukraine, and we have been able to secure that,” he told reporters.

Grossi has been trying to negotiate a visit to the plant since March, when Russian forces first seized the facility. An initial proposal to enter the plant through Russian-occupied Crimea was rejected by Ukraine, which viewed that itinerary as an affront to its sovereignty.

On Tuesday, Ukrainian officials accused Russia of shelling the path the IAEA inspectors will take to reach the plant to force the group to pass through Crimea instead. They did not provide evidence for their claims, and Russia did not directly respond to the allegation. On Wednesday, Russian Foreign Ministry spokeswoman Maria Zakharova said “Russia is doing everything or even more in order to make the mission … happen, be safe, and accomplish all of its tasks.”

Zakharova without evidence accused Ukrainian forces of trying to “obstruct the IAEA mission,” and she repeated the Kremlin’s position that Ukraine has been “shelling the plant and the adjoining territory.” She said she hoped that the IAEA inspectors would be “objective and see everything that is happening there now.”

For its part, Ukraine wants the IAEA visit to highlight the dangers of Russia’s continued occupation of the facility, which temporarily lost power last week after fires damaged its last functioning transmission line. Russia has also been laying the groundwork for a staged referendum and planned annexation of the region.

“Every minute the Russian troops stay at the nuclear power plant is a risk of a global radiation disaster,” Ukrainian President Volodymyr Zelensky said last week.

Ukrainian officials remain worried that the Kremlin’s forces will sanitize the plant ahead of the visit and intimidate workers into not telling the truth about Russian behavior, prompting the IAEA to bless the safety protocols at the plant. That would, in effect, legitimize Russia’s occupying presence, the Ukrainians fear.

“The worst-case scenario is when they come and say it’s best that the station is under Russian control [and] in general, nuclear safety protocols are followed,” Ukrainian Foreign Minister Dmytro Kuleba told The Washington Post last week.

The nuclear inspectors are scheduled to spend the night at a hotel in Zaporizhzhia before visiting the plant first thing on Thursday morning, said a spokesman for the plant.

Annabelle Timsit and Mary Ilyushina contributed to this report.

The latest: Grain shipments from Ukraine are gathering pace under the agreement hammered out by Ukraine, Russia, Turkey and the United Nations in July. Russia’s blockade of Ukrainian Black Sea ports had sent food prices soaring and raised fears of more hunger in the Middle East and Africa. At least 18 ships, including loads of wheat, corn and sunflower oil, have departed.

The fight: The conflict on the ground grinds on as Russia uses its advantage in heavy artillery to pummel Ukrainian forces, which have sometimes been able to put up stiff resistance. In the south, Ukrainian hopes rest on liberating the Russia-occupied Kherson region, and ultimately Crimea, seized by Russia in 2014. Fears of a disaster at the Zaporizhzhia Nuclear Power Station remain as both sides accuse each other of shelling it.

The weapons: Western supplies of weapons are helping Ukraine slow Russian advances. U.S.-supplied High Mobility Artillery Rocket Systems (HIMARS) allow Ukrainian forces to strike farther behind Russian lines against Russian artillery. Russia has used an array of weapons against Ukraine, some of which have drawn the attention and concern of analysts.

Photos: Washington Post photographers have been on the ground from the very beginning of the war — here’s some of their most powerful work.