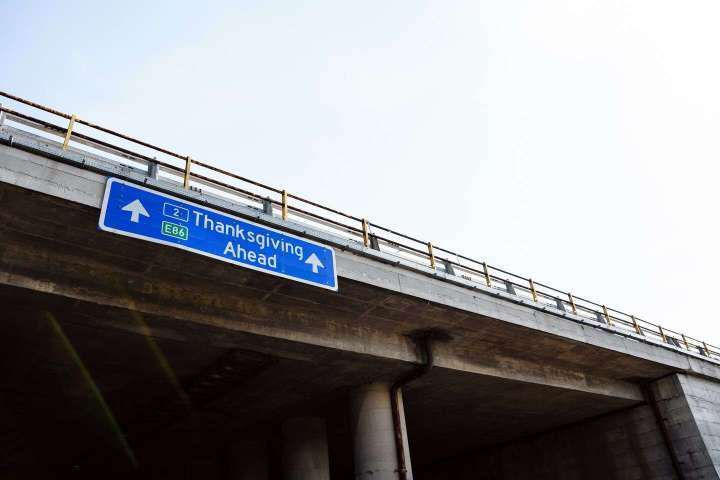 When Dennis Shirshikov thinks about Thanksgiving travel, he has flashbacks to this summer. He relives the endless airline delays, the cancellations and the high prices. And he wonders whether the upcoming holiday travel period could be worse than the nightmares of July and August.

Remember this summer? Gas prices soared. Airlines canceled just over 2 percent of all domestic flights. It was enough to make anyone stop traveling for good.

Shirshikov flew his family from New York to Albuquerque this spring, and he says it was a hassle and was overpriced. So for Thanksgiving, he’s driving from New York to Fort Lauderdale, Fla., to visit relatives. With three kids younger than 5, he’ll be making frequent stops and staying in hotels.

“Flights were out of the question,” says Shirshikov, who runs a real estate investment firm in New York City. “Gas prices are definitely a concern. We’re a bit worried about any looming health issues and would gladly forfeit the money we have already spent on the trip if it meant keeping everyone healthier.”

Many travelers have already started to wonder whether this fall will be a repeat of summer, with high fares and numerous cancellations. And what about gas prices, which peaked around the height of the summer travel season?

Travel insurance expert Chiranth Nataraj predicts that the number of air travelers will return to 2019 levels this Thanksgiving. But Nataraj, president and CEO of International Services and founder Visitor Guard, says it will be anything but business as usual. With airlines continuing to experience staff shortages and other operational problems, he expects more flight cancellations than last Thanksgiving.

“Covid will also play a big role this Thanksgiving and cause medical uncertainty for many travelers,” Nataraj says.

That said, fall travel won’t be an unwanted summer-travel sequel, according to Michael Taylor, managing director for travel, hospitality and retail at J.D. Power, a marketing research firm. It will be more of a spinoff.

“This past summer was characterized by sustained demand that didn’t seem to be blunted by increased ticket, room or car rental charges,” he says. “Thanksgiving travel is very date-specific. And airlines will better understand what the current system can handle versus what happened this past summer.”

But airfares will remain high. The airfare app Hopper sees the average domestic round-trip airfare hitting $373 in November, up 24 percent from 2019, the last year before the pandemic. You may find some lower fares if you book earlier in the fall, but prices are rising fast from the average of $286 in August. Hotel rates will also remain stubbornly high. Hopper says average room rates this fall ($217 per night) are 28 percent higher than in 2019.

This isn’t the year to wait for a last-minute deal, says Christina Tunnah, general manager for the Americas for travel insurance company World Nomads. “Don’t try to outsmart the market,” she says. “The cheapest time to book is always in the past.”

So in terms of pricing, it’ll be almost as challenging as the summer — excluding gas prices. But it depends on where you want to go.

“The cost of air and lodging will be at the summer levels for the most popular destinations, such as Mexico and the Caribbean,” says Peter Vlitas, executive vice president for partner relations at Internova Travel Group. But Europe will cost considerably less than it did last summer because of lower demand.

It’s not going to be just another Thanksgiving. Even the last “normal” Thanksgiving in 2019 was different, says Matthew Colbert, founder of Empire Aviation Services. Back then, planes were full, but flights were plentiful.

He cautions that if you treat this holiday like previous Thanksgivings, you’ll be in trouble. “It’s a short, intense holiday and travel period — and any hiccup can cause a big headache. Travelers need to leave extra time on either end of the trip to get where they’re going and back again.”

Baruch Silvermann, CEO of the Smart Investor, says travelers overpaid for their airline tickets this summer. Worse, they were on uncomfortably crowded flights.

But there are ways to make Thanksgiving travel less frenetic — and less expensive.

“If you can travel before the holiday rush or plan to return the following Tuesday or Wednesday, you can reduce the risks of packed flights where you could easily get bumped,” he says.

How do you clear those Thanksgiving travel hurdles? If you’re flying, you could do what travel adviser Andrew Steinberg is doing for his clients: Hire an airport greeter to whisk you through the chaos. An airport concierge can find a faster way through security or a shortcut to your gate or airline club. The services start at about $100 per person. “With cancellations, lost luggage and overall confusion, it is worth the cost to have on-the-ground support to help smooth out any potential concerns — especially internationally,” says Steinberg, who works for Ovation Networks.

Maybe you can’t escape the high prices or the cancellations this Thanksgiving, but you can get away from the crowds. Consider America’s perennial favorite Thanksgiving destination for the past six years running, according to a survey Allianz Partners USA. “Since the survey’s inception in 2016, Allianz has found that the number one U.S. city Americans head to for Thanksgiving festivities is New York City,” says Daniel Durazo, an Allianz spokesman.

Maybe Shirshikov is making a smart move by taking advantage of lower gas prices — and leaving the Manhattan crowds behind.