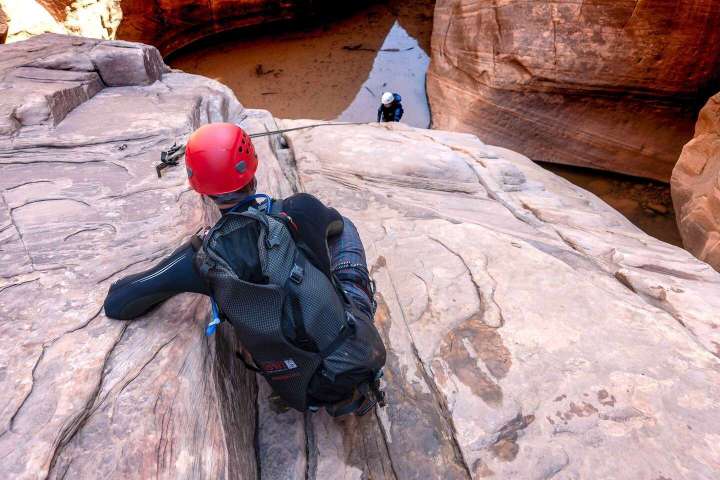 I wave goodbye to my husband, Derek, and our friends Chase and Tara until they disappear around a corner in a brushy wash in Utah’s San Rafael Swell. The four of us have rendezvoused here, about three hours south of Salt Lake City, for a three-day canyoneering trip. The harsh, high-desert anticline is almost as big as Delaware and home to such wildness and alien-looking geology that the Mars Society has built a Mars Desert Research Station there. Trail signs, support services and paved roads are as scarce as other visitors.

But this morning, on Day 2 of our trip, I decide it will be better for everyone if I hike and hang out in camp instead of going on the group’s planned canyoneering adventure down Knotted Rope Canyon.

Derek offers to stay behind, too, but I tell him no. Just because I can’t do Knotted Rope doesn’t mean he shouldn’t. Also, I enjoy solo time, especially when the landscape is as big as the thinking I have to do.

Yesterday in another canyon, symptoms from multiple sclerosis, an incurable, degenerative neurological disease with which I was diagnosed when I was 30, put myself and the group in danger. Today, after 16 years of fighting against and/or ignoring MS-caused limitations — denying them allows me to believe, if only one adventure at a time, that I’m in control — I’m trying something different, albeit reluctantly. My wave goodbye is accompanied by tears.

The first four hours of our first canyoneering adventure, in Lower Eardley Canyon, are most excellent. From a camp we established near the Eardley Canyon Trailhead in the southern section of the Swell, we walk up Straight Wash, a wide slash of sand sometimes shaded by cottonwood trees and sometimes congested with nests of cottonwood carcasses deposited by flash floods. (Although there are two major rivers that cut through the Swell, it is Interstate 70 that has been the dividing line between north and south sections since 1970.)

After two miles, we leave the wash to make our way up a jumbly ridge seemingly stitched together by the arthritic, extensive roots of dwarf juniper and pinyon trees. After about 45 minutes and 800 vertical feet of elevation gain, we’re at the top of a gully that, once we descend it, will drop us into the middle of Eardley Canyon. At the bottom of the gully, we’re no longer hiking, but canyoneering, which does include hiking, but also scrambling, wading, stemming, problem-solving, rock climbing, swimming, rappelling, squeezing and even butt sliding. When canyoneering, you wear a climbing harness and helmet and, depending on the time of year and amount of swimming, maybe a wet suit. There are many ways canyoneering can injure or kill you, including hypothermia, drowning and falling.

According to Christopher Hagedorn, the owner and lead guide of Get in the Wild Adventures, which specializes in combining guided trips in Utah and Washington with teaching clients how to be safe and recreate responsibly in the outdoors, the San Rafael Swell is “one of the very best canyoneering destinations in the world.”

Until recently, the Swell’s landscape had no protective designations, even though there had been a decades-long push for it to be recognized as a national park or monument. In 2019, though, the bipartisan John D. Dingell, Jr. Conservation, Management, and Recreation Act established wilderness areas within the Swell, totaling about 663,000 acres, and also established the approximately 217,000-acre San Rafael Swell Recreation Area. The Bureau of Land Management manages the wilderness areas and the recreation area. The act also roughly tripled the size of Goblin Valley State Park, in the southern part of the Swell and one of Utah’s most popular, to nearly 10,000 acres.

There is canyoneering to be done in the Swell’s wildernesses, recreation area and state park. Because we wanted solitary car camping — pitching our tent within feet of our parked car and with no neighbors in sight — we’re in the recreation area. Wilderness camping requires backpacking (i.e., carrying all of your equipment with you); Goblin Valley State Park has a developed campground with 25 sites, two yurts and showers, but it’s also crowded — relatively speaking.

In Eardley, we don wet suits, harnesses and helmets. I’m fortunate that the progression of my MS, which about 2.8 million people have worldwide, has been minor. My balance can get wonky and sometimes my body is unable to regulate its temperature.

A feature of slot canyons is that little sunlight reaches their floors. In October in the sun in the Swell, the air temperature is in the low 70s. In Lower Eardley Canyon, the water and air temperature are both about 50 degrees. To keep myself from spiraling into hypothermia, I put on extra layers of clothing beneath my wet suit that Derek, Chase and Tara don’t bother wearing. Then we set off.

There are boulders to be negotiated, sandstone slabs we slide down on our butts, and places in which our feet stem out to the side, our sticky-rubber-soled shoes creating friction against the narrow walls. We rappel into porcelain-smooth sandstone bowls filled with water the color and clarity of chocolate milk. We swim through the chocolate milk and then, on the far side, problem-solve how to climb out of the featureless rock.

It’s part obstacle course, part escape room. A helping hand or a rope is almost always required. It is the best adventure ever until Chase starts setting up the fourth of six rappels.

I had been keeping a chill at bay by, where the topography allowed, doing air squats, lunges and jumping jacks. These work until they don’t, and I go from chilly to freezing quickly: My lips turn blue and my fingers white. Derek takes off the Gore-Tex jacket he’s wearing over his wet suit and puts it on me. I’m shivering too hard to manage the zipper on my own, though. I’ve never gotten this cold before, and I become terrified we won’t make it out of the canyon and into the sunshine of Straight Wash before I’m fully hypothermic. If this happens, it will be the responsibility of Derek, Chase and Tara to rescue me.

Full-on hypothermia doesn’t happen, but it does take an hour of lying almost naked on a sunbaked sandstone slab in Straight Wash at the mouth of Eardley Canyon for my shivering to stop. Hours later, brushing my teeth, I drop my toothbrush into the sand, because my fingers still aren’t fully functional.

Knotted Rope Canyon has at least as many pools as Lower Eardley and is longer. The decision not to go is as right as it is hard.

By myself in camp is not hard, though.

It is cheesecake for breakfast followed by a nap in the sunshine. It is no pressure. It is picking out a mesa in the near distance and seeing whether I can get to the top of it. It is sitting on the mesa’s summit and straining to see whether there are any marks of humanity beyond the road to our campsite and our car and tent. (There aren’t.) It is relaxing in camp, reading our canyoneering guidebook and finding a slot canyon that doesn’t require swimming for all of us to do together tomorrow. It is giving up being good.

Everybody has something. I have MS. I have also had cancer, been divorced and had more close friends die than the average 46-year-old.

None of us get to choose our somethings, or choose how they respond to our attempts to control them. Our choice is how we perceive and live with the limitations and baggage of our things. In the Swell’s limitless landscape, I choose to see my limits as an opportunity to be free.

Mishev is a writer based in Jackson Hole, Wyo. Her website is dinamishev.com. Find her on Instagram: @myspiritanimalisatrex.

Two yurts; 25 campsites for tents, groups and RVs; showers; a dump station; and restrooms in Goblin Valley State Park in the southern section of the Swell. Tent and RV sites $45 per night; yurts, which can hold five people, $150 per night.

Aside from the San Rafael Bridge Campground, dispersed car camping in the recreation area is a free-for-all and there are many amazing spots, all of which are primitive. Please only use existing sites, which are not marked but are obvious because of fire rings and trampled vegetation. Pack out all garbage. Free.

Fifty-one basic rooms and nice outdoor spaces on a hillside just above the Green River. Buffet breakfast included. Rooms from about $140 per night.

Spare but clean rooms in the town where Butch Cassidy and crew used to come for supplies. Rooms from $149 per night.

Four themed rooms in a Victorian-style home built in 1906 and now on the National Register of Historic Places. Rooms and breakfast from $85 per night.

Campers can stock up on ice and food at this grocer. Open Monday to Saturday, 8 a.m. to 8 p.m.; closed Sunday.

Burgers, shrimp baskets, pizzas, sandwiches and more with patio seating available. Open 11 a.m. to 8 p.m., Monday through Saturday, and Sunday until 6 p.m. Entrees from about $8.

Wilderness areas within the Swell total about 663,000 acres. Mechanized/motorized travel (this includes mountain bikes), mining, and oil and gas drilling are prohibited in these areas. These areas do not have marked trails but can be explored by experienced desert travelers. Free.

This 9,915-acre state park is one of Utah’s most popular and, along with Bryce Canyon National Park, about 200 miles southwest, contains some of the largest occurrences of hoodoos in the world. It can be explored via six miles of hiking and seven miles of beginner to intermediate mountain biking trails. The park is also a designated International Dark Sky Park. Open daily, 6 a.m. to 10 p.m. Private vehicle, $20 per day; $25 on weekends and holidays in April, May, September and October. Motorcycle, bicycle or pedestrian, $10.

See pictographs and petroglyphs created by the Barrier Canyon people at this 130-foot-long panel in Buckhorn Wash in the northern section of the Swell. Free.

No canyoneering experience or technical gear is required for this five-mile round-trip hike up Straight Wash to a pool at the bottom of Eardley Canyon. Free.

Museum of the San Rafael

Look down about 1,200 feet into the “Little Grand Canyon,” carved by the San Rafael River. You can drive to the overlook; picnics are allowed on the rim, but camping is not. Intermediate mountain bikers can start the approximately 17-mile Good Water Rim Trail here. Free.

Get in the Wild Adventures