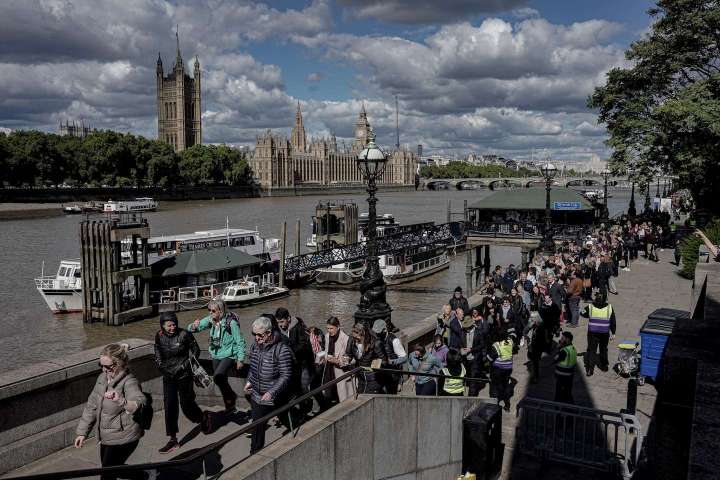 LONDON — About a quarter of a million people saw Queen Elizabeth II’s coffin as she lay in state for four days at Westminster Hall in central London, according to preliminary figures released by the British government.

Members of the public wanting to pay their final respects after the queen’s death on Sept. 8 had to stand in a line — or queue — that grew so long over four days that wait times reached 24 hours at one point. The end of the line even had to be temporarily closed, but all that did was create a queue for the queue.

Initial estimates suggest that more than 250,000 people went through the parliamentary building to see the queen’s coffin, Culture Secretary Michelle Donelan told British broadcasters early Tuesday. While some who entered Westminster Hall were able to bypass the queue — including lawmakers and their guests, accredited journalists and foreign dignitaries invited to the queen’s funeral — most would have had to queue, in many cases overnight.

If confirmed, the figure would be significantly lower than estimates floated by some officials earlier. Reuters reported Thursday that about 750,000 people were expected to file past the queen’s coffin in Westminster Hall. Guinness World Records had said the line could “well be part of a record-breaking event.”

The British love queues. The queen’s death brought one for the ages.

In an article on the organization’s website, however, it described previous funeral queues that appeared to have been longer, including for Elizabeth’s father, King George VI. More than 300,000 people joined what was then dubbed “the Great Queue” to view his coffin in 1952.

Craig Glenday, editor in chief of Guinness World Records, said there is currently no event that holds the title “longest queue” ever.

He stressed that a queue is “an orderly line up of people, not everyone piling in,” meaning that the millions who turned out for the funeral of Iran’s Ayatollah Ruhollah Khomeini in 1989 would not be comparable.

It may be hard to compare the queen queue even with similar events. Records show that about 300,000 people passed through to see former British Prime Minister Winston Churchill lying in state over three days in 1965. But that was a shorter line, with a wait of only a couple hours, and may people went through multiple times.

Glenday said Guinness would rely on government numbers and also scan through records and newspaper clippings and photographs of other big events.

They might end up with a qualified category, he said, depending on the kind of figures the government hands over. The queen’s lying-in-state could possibly win the title of “longest counted queue, or longest monitored queue, or longest assessed queue,” he said.

The 10-day national mourning period for the queen, which ended Monday in an elaborate state funeral at Westminster Abbey, was a royal blockbuster show that had been planned for decades and choreographed down to the minute. But the queue was a messy, funny and uniquely human moment amid all the rehearsed pageantry. It quickly took on a life of its own, with some queue masters doing it twice and others live-tweeting their experiences.

Soccer star David Beckham was in the queue for 13 hours and told “Good Morning America” how he survived the ordeal with Pringles, lemon candy, coffee, sandwiches and doughnuts.

Some mourners endured serious hardships. The London Ambulance Service said it treated 2,012 patients in the queue, with 240 taken to hospitals — as nighttime temperatures plunged and people huddled under blankets and tents.

The Washington Post spoke to the first and last people in the queue. Vanessa Nanthakumaran, an administrative assistant and the very first in line, arrived on the morning of Sept. 12 — two days before the viewing began — and queued for more than 50 hours. Like many, she said she was there “to be part of history.”

For Christina Heerey, the final person in the queue, it was so important to see the queen lying in state that she did it twice.

In the epic queue to see Queen Elizabeth II’s coffin, they were the last

During the four days that began Wednesday at 5 p.m. and ended Monday at 6:30 a.m., the queue became an object of fascination at home and abroad, with a dedicated government tracker and parody social media accounts.

Some nicknamed the queue “the Elizabeth line,” which is also the name of a new subway line. The queue for the queue was dubbed QEII.

For many, it was a surprisingly joyful affair, with people of all ages and nationalities lining up, many of whom had a connection with the queen.

Pluck a random person from the crowd, as Australian Broadcasting Corporation correspondent Barbara Miller did — live on air — and you may have found yourself talking to the queen’s former representative in Parliament, known as the “Black Rod,” David Leakey, who spent years helping to plan her funeral. (Miller humorously owned her ignorance before turning the conversation into a fascinating chat about Leakey’s relationship with the queen and his thoughts on the new king’s frustration with a leaky pen.)

A priceless moment when @abcnews talks to a random member of the public in the queue to pay respects to Her Majesty & the person turns out to be the former Black Rod!

When asked to explain the role he says “Well you have a Black Rod in Australia” 🤣pic.twitter.com/PHhyqddlKQ

David Hatchett, 44, from east London, was among the last to see the queen’s coffin. He said copious amounts of tea helped him get through his nine-hour wait. Small talk with new friends also helped — albeit in a very British kind of way.

He said there was a lot of “politely talking to people you don’t really know. … We exchanged anecdotes, understood people’s motives for wanting to be there. There was a camaraderie about it. It’s not like we shared our whole life stories, though.”

He said seeing the “queen’s coffin, the crown jewels on top … was a touching moment. Being one or two meters away from the queen, it’s a strange concept to comes to terms with.”