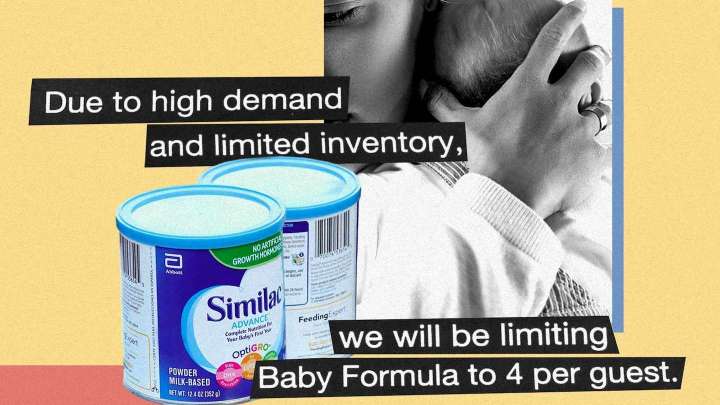 Public attention has largely moved on, but the U.S. supply shortage isn’t over — and the scarcity continues to distress parents and doctors struggling to feed vulnerable infants.

In Memphis, Mark Corkins heads the pediatric gastroenterology, hepatology and nutrition practice at the University of Tennessee Health Science Center. Earlier in the shortage, which began in earnest after a recall this past spring, Corkins treated children who had been hospitalized because they didn’t have enough of the specialty formulas they needed. When these children were fed other formulas and had negative reactions, they became so dehydrated that they required fluids and nutrients delivered through IVs.

Corkins said he still sees periodic shortages of specialty formulas, which has made caring for patients undergoing intestinal rehabilitation particularly hard. Those children require strict diet management. And “just when you get them adjusted to one formula,” he wrote in an email, “you have to switch again.”

Alyssa Rosenberg: The baby formula shortage is an outrage. A sane country would fix it.

Formula might once have been a necessity Americans could take for granted — akin to a utility such as water or electricity. But people’s struggles this year to find a reliable supply are a reminder of a disturbing truth: In a breakdown as broad as the formula shortage has been, even when government and businesses step up to help, individual Americans end up fending for themselves and the babies in their care.

As with many other products, the supply of baby formula was disrupted by the covid-19 pandemic. But in 2021, two babies died and two others fell illafter drinking formula made in Abbott Nutrition’s Sturgis, Mich., plant. (The FDA later investigated the deaths of seven other children who drank formula produced at the Sturgis plant.) At the urging of the Food and Drug Administration, Abbott in February issued a major recall.

The company temporarily shuttered the factory after an inspection identified slovenly practices by employees, poorly maintained equipment and pooling water. (In this, as in other cases, Abbott maintains that no one has established a direct link between its factories and the cronobacter bacteria that sickened the children.) As existing formula was pulled from circulation and Abbott lost the capacity to manufacture more, the stocks on store shelves began to dwindle.

Given that the factory produced about 20 percent of the formula made in the United States, the recall and shutdown were catastrophic for families. The situation was even worse for those who relied on the specialty formulas manufactured only in the Sturgis plant.

By the week ended July 17, according to the Chicago-based market research firm IRI, stores were stocking just 68.69 percent of their usual powdered formula inventory. By the week ended Sept. 11, thanks to a combination of government and industry efforts to get more formula on shelves, that figure rose to 81.55 percent of normal — progress, but not yet a full recovery to the 90.76 percent stock level in February.

Behind those figures are untold numbers of exhausted, worried families.

Mindy Samantha Case, a pediatric and neonatal intensive care unit nurse, volunteered to help moderate the NOVA Baby Formula Finding Network — a Facebook group serving families in Northern Virginia and surrounding areas — when it was founded in May. The group has more than 2,800 members who seek and post real-time reports of which formulas are in stock at local stores.

Need peaked earlier in the summer, Case told me, but the group continues to see a consistent stream of new members, as well as regular waves of requests for help finding specific brands.

“I’ve had the luxury of having the time, the money, the resources” to get involved in the sourcing effort, Case said. “But some people don’t, and it’s just really sad and unfortunate that no one else is helping; … 2,800 moms can’t change the state of the country.”

Among the families under greatest strain are those who participate in the Special Supplemental Nutrition Program for Women, Infants and Children (WIC), who are typically limited to buying formula from specific brands — in many states, those manufactured by Abbott — and in specific quantities.

Although the U.S. Agriculture Department moved quickly in February to give WIC recipients more purchasing flexibility, they are still getting squeezed by the natural impulse of other parents to overbuy formula when they can find it, according to Brian Dittmeier, senior public policy director for the National WIC Association.

There have been efforts to make recompense to families, though even these require additional effort by tired parents. In May, Abbott’s CEO used an op-ed in The Washington Post to announce a $5 million fund to help families whose children were hospitalized because they couldn’t get the specialty formula they needed. Families would be eligible for up to $4,500 per patient — but it was on them to track down the fund and apply.

When I asked this month how much money Abbott had paid out, company representative John Koval said “applications and uptake have been slow but steady.” If any money from its fund doesn’t go directly to patients, Koval told me, the remainder will be donated to “an organization that supports childhood nutrition and health.”

That’s a perfect metaphor for the challenges of a disaster such as the formula shortage: Even when a systemic collapse captures public attention, it is individuals who are left to bear the consequences — and to continue shouldering the load when the headlines, and the outrage, move on.

This is the first of three columns exploring the nation’s response to the baby formula shortage. Up next: What government and the private sector did right.