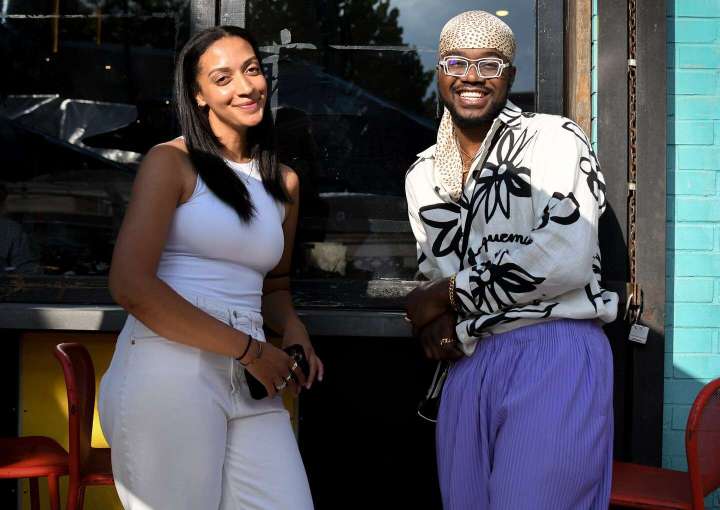 Ogo is from Waynesboro, Pa., and went to college in Wisconsin, but left before earning a degree. “My dad died, and I was like, ‘Damn, life really ends, and if I die, I don’t want to die in Wisconsin,’ ” he said. “The school part will always be there, but the things that I’m doing right now won’t always be in front of me.”

He’s young — 24 — and has spent his time building an influencer marketing business. He is also learning Italian and started playing tennis. What Ogo hasn’t had is a lot of long-term relationships. The longest one was on and off for two-ish years when he was living in Los Angeles, but he never found his people there. So, he moved to the nation’s capital in late 2020 because “all of my cousins that live in the U.S. live in D.C.”

He applied for Date Lab after a conversation about dating with a friend who works at the paper. “I’ve never been on a blind date, which seems harder with the internet [because] you can do research on people now. The not knowing sounds kind of funny.”

His date, Jana, hasn’t had many long-term relationships either. The 23-year-old was in college outside Boston when the pandemic started and says that made dating harder. “The pandemic really stunted that for me … and then coming out of that I just haven’t dated much.”

After landing her second post-college job, she moved this spring to D.C. from New York City, where she was doing public relations for a financial services company. “I didn’t love that job and started looking around and took this job that’s in the change advocacy sector, and they ultimately said ‘We need you to come to D.C.,’ so here I am!”

Jana applied for Date Lab because her roommates put her up to it, but she also thought it would be a good way to kick off dating in a new city. She’s not looking for love but not not looking for love either. “I’m in a place where I’m not set on anything but wherever the wind takes me,” she explained.

Jana took an Uber to El Chucho in Columbia Heights, and when she got there, Ogo was sitting at the bar having a snack. “My very first impression was that he was wearing a very vibrant outfit and that he was eating already,” Jana said. “He was wearing a scarf on his head. He was wearing purple pants that happened to be corduroy on a 100-degree day. It obviously was curated.”

Yes, Ogo was in purple pants and, yes, they were hot. But they were not corduroy. “I had been gone for two weeks so I took all my good outfits with me, and I had pretty much worn everything,” he said, adding that he had flown into D.C. late the night before the date and that they were Homme Plissé Issey Miyake flowy pants. “The outfit I had wasn’t really ideal, but I was counting on I was already going to be sweating … and I didn’t have any shorts.”

As for his first impression of Jana, Ogo was surprised to find out during the date that she was 23. “She kind of gave a little bit of an older vibe,” he said. “I thought she was 26 or 27.”

They got their Date Lab photos taken, then headed to the rooftop where they said the conversation flowed. “We talked about his work [and] the cyclical nature of popularity for influencers,” Jana said. They also talked about his travels, her dad who is a chef and her love of food, and how they both find children funny and have spent time tutoring and mentoring them. Plus, they discovered they were like-minded about living in D.C.: It’s all right. Just all right.

This talking happened while he sipped two margaritas and she worked on a Paloma then moved on to a drink with vodka and hibiscus tea. They also ordered two rounds of tacos (al pastor for Ogo, chicken and birria quesa for Jana) but didn’t share.

Once it started getting dark, Ogo noticed they were both stifling yawns, so “I tried to read the room a little bit,” he said. They made their way out and he asked for Jana’s phone number. “No one asks for numbers anymore; I don’t know, everyone is lame,” he said. “I like to open the line of communication.”

Jana shared her number but admitted there was no spark. “I felt like it was a very platonic ‘We’re in this weird situation together, we’ll make the most of it’ [vibe],” she said. Ogo thought Jana was cool, but no butterflies for him either — though he said he would be open to hanging out as friends.

Ogo texted once after the date when a movie he was watching made him think of a joke Jana had made, but the two haven’t been in contact since.

Tanya Ballard Brown is executive editor for Government Executive and a comedian.

Editor’s note: Because of privacy and safety concerns, Date Lab allows participants to be identified only by their first names.

A reminder from the Date Lab team: Our daters volunteer to participate in the column. While we appreciate a lively discussion assessing our matchmaking skills, please follow our community rules and do not comment on someone’s appearance or write a personal attack.