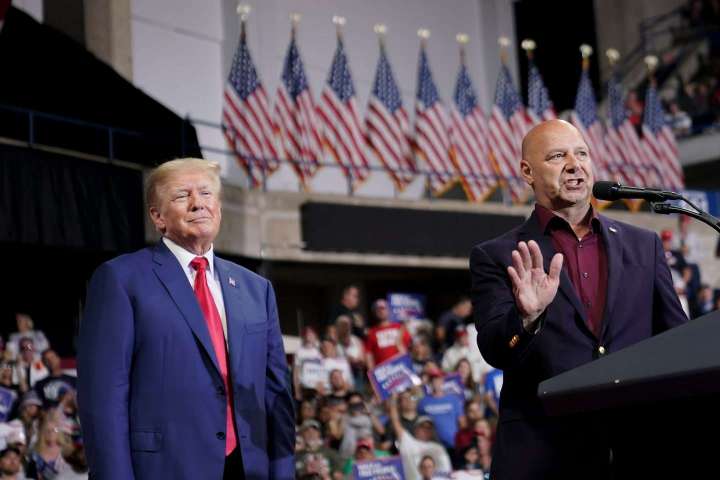 PHILADELPHIA – Pennsylvania is on fire. Since 1915, the Red Ash colliery has been burning beneath the hills near Wilkes-Barre, and dozens of other fires smolder in abandoned coal mines. This year, however, the important heat is on Pennsylvania’s surface, in the contest to become the state’s next governor, the 2022 election that poses the most risk to the nation. Risk assessment involves weighing the probability of an event against the event’s potential destructiveness. So:

Suppose voters pick the Republican candidate, Doug Mastriano. And suppose that late in the evening of Nov. 5, 2024, Gov. Mastriano thinks Pennsylvanians picked the wrong person to receive the state’s presidential electoral votes. Today, candidate Mastriano promises that, as governor, he will have the executive power, and a mandate, to intervene, thus plunging the nation into chaos.

A member of the House of Representatives is 1/435th of one half of one of the federal government’s three branches. A senator is 1 percent of the other half. There are limits to how much actual, as opposed to aesthetic, damage a rogue legislator can do to the nation. A governor, however, can do important things on his own, especially if, as in Pennsylvania, he appoints the secretary of state, who administers elections.

A plucky disregard for public opinion has its charms, but Mastriano perhaps too wholeheartedly embraces John Quincy Adams’s 1825 injunction that politicians should not be “palsied by the will of our constituents.” In this nation, Mastriano’s indifference to the parameters of the possible is apparent regarding abortion, which he wants to outlaw, with no exceptions for rape, incest or the mother’s life, a policy pleasing to (per a Pew Research Center poll) 8 percent of Americans. He opposes same-sex marriage, which (per Gallup) 71 percent support.

George F. Will: While Oz campaigns about campaigning, Fetterman sells a synthetic authenticity

Mastriano easily won (by 23 points) a nine-candidate Republican primary, receiving 43.8 percent of the vote. He is a human cafeteria dispensing ample portions of all the spicy fare that causes many Republicans to salivate, and gives most voters indigestion. He was at (but apparently not in) the U.S. Capitol on Jan. 6, 2021, having used campaign funds to rent buses to bring some supporters to the goings-on that President Donald Trump promised would be “wild.” Mastriano has raised money on a social media network frequented by antisemites, including the one who is accused of murdering 11 at a Pittsburgh synagogue in 2018.

But what makes Mastriano more than an especially exotic political exhibit is his vow to appoint a secretary of state “who’s delegated from me the power to make the corrections to elections, the voting logs and everything. And I can decertify every [voting] machine in the state.” In the 2016 and 2020 presidential elections, Pennsylvania was decided by 0.7 and 1.2 percentage points, respectively. In 2024, the state probably will again be closely contested, and its electoral votes could determine the national winner. So, imagine Mastriano, who has neither evidence nor doubts that Trump won the 2020 election, decreeing “corrections” to the election. His motives are frightening because they are pure: He has the scary sincerity of the unhinged whose delusions armor them against evidence.

His state senate Republican colleagues, weary of his hair-on-fire approach to advocating his monomania, removed him as chair of the pertinent committee. It would be more difficult to deal with him as governor while a nation on tenterhooks is a horrified spectator to his keeping his campaign promise to prevent a recurrence of the 2020 enormous Pennsylvania voting fraud that never happened.

Fortunately, Mastriano’s Democratic opponent is two-term Attorney General Josh Shapiro, 49, who when reelected in 2020 received about 3,000 more votes than Joe Biden drew in carrying the state. Although 24 percent of Pennsylvanians are Catholics, Shapiro says he encounters from them more gratitude than resentment for his tenacious assault on the church’s stonewalling about sexual abuses of children by priests. Speaking of religion, the author of Ecclesiastes 10:19 — “money answereth all things” — was a better writer than political scientist. Yes, social media provides inexpensive deliveries of messages, and there is a steeply declining utility of dollars spent on television ads after a saturation is reached. Nevertheless, money matters and Shapiro will spend more than Mastriano.

From the first census (1790) until that of 1940, Pennsylvania was the second-most populous state. In 1960, it had as many electoral votes (32) as California, which today has 54 to Pennsylvania’s 19. This fall, however, the state will matter more than any other as its voters’ choice of governor will either imperil or reassure the nation that began here.