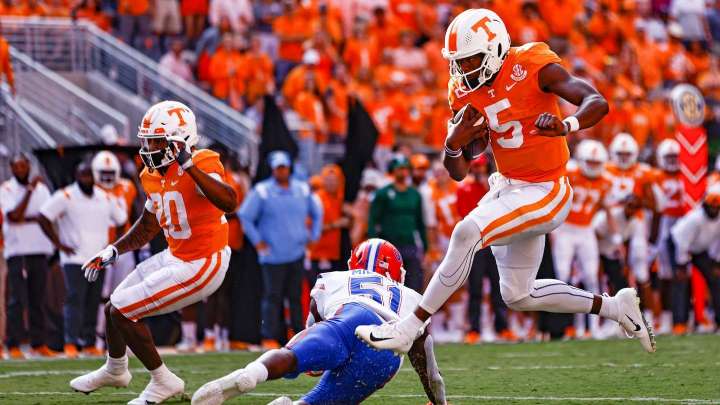 It was all set up for the Volunteers to lose in the most excruciatingly Tennessee manner possible. After leading by 17 with five minutes to go, the Vols gave up a pair of scores and allowed Florida to corral a perfectly executed onside kick in the closing seconds.

But maybe things are turning a bit for Tennessee, which got Kamal Hadden’s interception on the final play of the game to secure a 38-33 victory.

And most tellingly, they knocked off one of the three major rivals that have caused them so much trouble since the Phil Fulmer era began to fade in the mid-2000s.

And No. 20 Florida had claimed 16 of 17 since 2005, with Tennessee’s victory in 2016 the only oasis in a stretch that covered some good times in Gainesville (the Urban Meyer years) and some largely forgettable ones (the coaching stints of Will Muschamp, Jim McElwain and, to a lesser extent, Dan Mullen).

The Volunteers still have to deal with Alabama (Oct. 15) and they still have to visit Georgia (Nov. 5). One victory doesn’t make Tennessee relevant nationally again, but it does provide some needed validation.