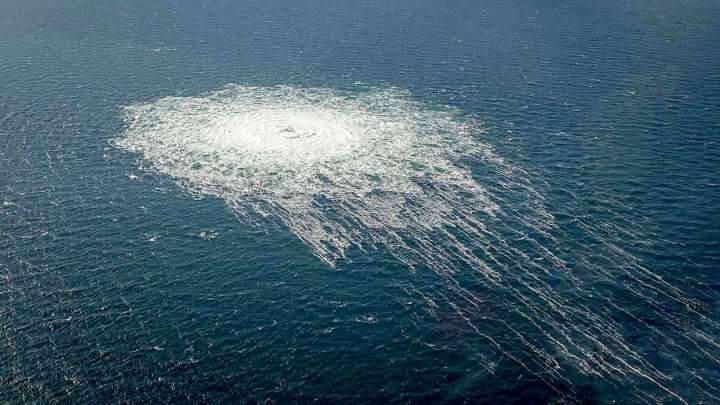 BERLIN — European leaders on Wednesday vowed a “robust and united response” to any attacks on their energy infrastructure following a series of breaches in underwater pipelines that are sending tons of natural gas into the Baltic Sea.

Though investigations into the simultaneous leaks in the Nord Stream pipelines just started, sabotage appears the most likely cause.

“These incidents show that energy infrastructure is not safe,” Viktorija Cmilyte-Nielsen, speaker of Lithuania’s Parliament, told a local radio station on Wednesday. “It can be interpreted as a warning.”

Danish and Swedish authorities detected two underwater explosions Monday and reported three breaches on the Nord Stream 1 and 2 pipelines. Seismologists in Denmark and Sweden said the blasts did not appear to be caused by earthquakes, landslides or other natural activity.

Flemming Larsen, managing director of the Geological Survey of Denmark and Greenland, went a step further on Wednesday, saying the agency is “quite confident that the tremors were caused by explosions.”

In a statement Wednesday, the Council of the European Union said such disruption of energy infrastructure would be met “with a robust and united response.”

It was not immediately clear what form that would take. An E.U. official, speaking on the condition of anonymity to offer a candid assessment, said proof is needed before imposing sanctions, “and for proof you need to have an investigation,” which takes time.

Sanctions are not the only option open to the 27-member bloc. Its responses could range from accelerating a cutoff of Russian energy deliveries to sending patrol boats into the Baltic Sea to help bolster pipeline security, the official said.

But opposition from some E.U. governments could make punitive action difficult, said Federico Santi, a Europe analyst with the Eurasia group. “It seems the sabotage was designed to limit the scope for retaliation,” he noted.

New sanctions announced Wednesday were unrelated to the damaged pipelines and were instead triggered by Russian President Vladimir Putin’s staged referendums in Ukraine, his threats on nuclear weapons and his partial military mobilization of his own citizenry.

Danish Defense Minister Morten Bodskov met with NATO Secretary General Jens Stoltenberg in Brussels on Wednesday morning to discuss what they called the “sabotage” of the pipelines.

Kremlin spokesman Dmitry Peskov called accusations that his country was behind the explosions “predictably stupid” and “absurd.” He told reporters on a call that Russia has no interest in damaging the pipelines — which are majority-owned Russian entities — because of the high value of the gas.

Peskov said the situation “requires dialogue and operative interaction among all parties to find out what happened as soon as possible.” He also suggested the U.S. government was behind the blasts, pointing to President Biden’s comment in February that “there will be no longer a Nord Stream 2” if Russia invaded Ukraine.

A U.S. official, speaking on the condition of anonymity to discuss a sensitive matter, said the United States had nothing to do with the attack on the Nord Stream pipelines, calling the idea “preposterous.”

Many European governments are now putting their energy infrastructure on heightened alert, though none said there were indications of direct threats.

“After what happened in the Baltic Sea, the Norwegian armed forces will be more present and more visible in areas around our oil and gas installations,” Norwegian Prime Minister Jonas Gahr Store said. The Danish armed forces have similarly increased their presence around the island of Bornholm, which is near the blast site, defense chief Flemming Lentfer said.

According to satellite imagery reviewed by The Washington Post, a mass of methane bubbles spanning roughly 13 miles in diameter first appeared on the surface of the sea on Monday morning. The image was taken before the second blast was recorded by seismic sensors.

It is not clear what role satellite technology will play in the investigation. Imaging can provide a more clear picture of the location of the leaks, but that location — in a cloudy region, over water — makes it tougher to understand their scale and scope.

Andrew Baxter, a director at the Environmental Defense Fund, posted some quick calculations to Twitter, estimating that the volume of gas amounted to “107,000 tons of methane.”

Most of that gas has left the pipelines, Kristoffer Bottzauw, managing director of the Danish Energy Agency, said at a news conference Wednesday. Still, the leak will place a significant strain on the climate, he said, with the total spill similar to 32 percent of Denmark’s total emissions over a year.

Some scientists say that calculation is an overestimate because it assumes that all methane in the pipelines will be released into the Earth’s atmosphere, when some portion will certainly be absorbed into the surrounding water..

The release, while not good, is unlikely to put a statistically significant dent in the global greenhouse gas budget, Jens Greinert, head of the DeepSea Monitoring Group at the Helmholtz Center for Ocean Research, told The Post.

Emily Rauhala in Karsto, Norway, Robyn Dixon in Riga, Latvia, Beatriz Rios in Brussels and John Hudson in Washington contributed to this report.