The Nationals and their fans know the bottom. This isn’t it. 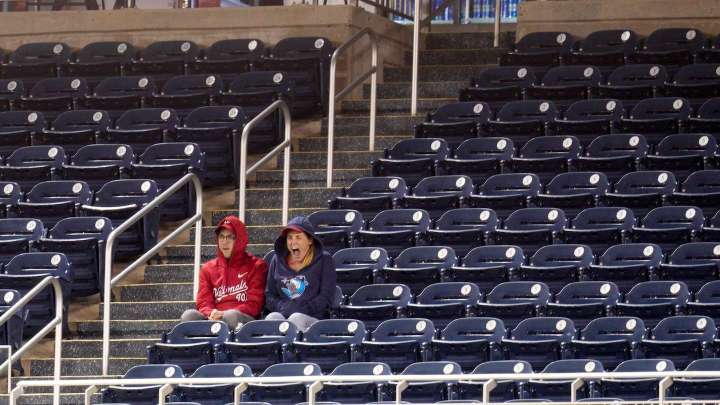 On the last day of the 2008 season, the Washington Nationals, managed by Manny Acta, fielded a lineup that featured Odalis Perez and Luke Montz as the battery. Emilio Bonifacio and Anderson Hernandez served as the double play combination. Kory Casto hit third and Ryan Langerhans cleanup. Ryan Zimmerman, the lone can’t-miss piece of a brighter-but-still-distant future, got the day off and was replaced at third base by Alberto Gonzalez.

Which is a long-winded way of saying: It has been worse. Much worse.

A night after they lost their 100th game for the third time since moving to Washington from Montreal 17 years ago, Dave Martinez’s ragtag Nationals hosted the defending World Series champion Atlanta Braves, against whom they are overmatched.They lost, 8-2, their 14th loss in 18 games against the Braves — with another chance to enhance that number Wednesday.

“The losing part of it,” Martinez said, “it’s hard to accept. It really is.”

Especially when for so long it wasn’t accepted here. At some point over the next week, these Nationals are likely to surpass the 2009 version, which lost 103 games in all shape, manner and size — including when the team issued two of its best players jerseys that read “Natinals.”

The pit was bottomless in those days. Those Nats were one game worse than the 2008 group, which went 59-102 — and didn’t play a rained-out 162nd game because, well, who wanted to watch that?

So, yeah, with series to complete against the Braves, the Philadelphia Phillies and the New York Mets — all National League East foes jockeying for postseason position — these Nats are almost certain to finish with the worst Washington baseball record since the 1963 Senators went 56-106. (Claude Osteen and Don Lock, anyone?) These Nationals have given up the second-most runs in all of baseball, scored the fifth fewest and made the third-most errors. Yeah, smells like 100-plus losses.

“Everything aside,” Martinez said, “I’ve had a lot of fun with this group because they’re into it.”

Now, it’s hard to put everything aside, because this season involved the gut-punch trade of Juan Soto and the bizarre feeling that a World Series parade staged less than three years ago somehow feels a decade in arrears. There is work to be done, and the Lerner family’s exploration of a sale of the franchise — a process that is ongoing and has an unclear end point — clouds everything about the future.

But the record doesn’t always display exactly where a franchise is in its development. Yes, from this perch, 2019 seems so long ago. But not as long ago as 2008 — which was the absolute depths.

That group most frequently threw out Aaron Boone at first, Felipe Lopez at second, Cristian Guzman at short with Zimmerman at third. An outfield of Willie Harris, Lastings Milledge and Austin Kearns was most common. And the rotation featured Tim Redding, John Lannan and Perez — who you may remember threw the pitch that opened Nationals Park — along with some hodgepodge of Jason Bergmann, Collin Balester and Shawn Hill piecing together the rest of the starts.

Sift through that group — both in real time back then and with the wisdom provided by history — and find pieces that might have contributed to something that could become a winner. There was Zimmerman, becoming a veteran. There was hope for Milledge, once a prized prospect. Lannan became a serviceable pitcher.

Beyond that? Hill was injured too frequently. Balester was a first-round pick who didn’t pan out.

The present was bleak. The future could only be seen with a NASA-issued telescope.

Sean Doolittle is hoping for a ‘do-over’ with the Nationals

Which is why, by the time the 2009 season concluded, it was a small-but-clear step ahead of its predecessor. Zimmerman became an all-star for the first time. Ian Desmond finished the season as the shortstop. Jordan Zimmermann made his major league debut. Michael Morse arrived in a trade with Seattle. Craig Stammen appeared in the rotation, Tyler Clippard out of the bullpen. And the club selected Stephen Strasburg with the first pick in the draft. The 2009 team lost one more game than the ’08 squad. It was in demonstrably better position.

Which brings us to this difficult summer, at times unsightly.

“A lot has changed, obviously, since I first came here,” said lefty Patrick Corbin, one of the characters who embodies this deterioration. (Corbin in 2019, when he helped win that World Series: 14-7, 3.25 ERA over 202 effective innings. Corbin in 2022: 6-18, 6.08 ERA with more hits and earned runs allowed than anyone in the league.)

So yes, Patrick, a lot has changed. But this isn’t the bottom. Man, it felt like it, both before the Soto trade when players who had neither a past nor a future here — Maikel Franco, César Hernández, Alcides Escobar, Dee Strange-Gordon, Lucius Fox, etc. — threw the ball around the yard with alarming regularity.

But as this season draws to a close, two things are true: The Nationals play a more palatable brand of baseball than they did when the season began, and they’re doing it with more players who might positively impact their future. Record-wise, they’re nowhere near the 2010 group that went 69-93 — a small step toward contention. Roster-wise, they’re better off, because that group was littered with veterans who were hanging on: Pudge Rodriguez, Adam Dunn, Adam Kennedy, Josh Willingham.

Here and now, the Nationals may have both the shortstop and the catcher on a contender in CJ Abrams and Keibert Ruiz. Abrams’s arrival has allowed Luis Garcia to move to second, which instantly makes his future brighter. Josiah Gray has struggled — allowing more homers and walks than anyone in the league — but if he goes on to a successful career as a starter, he won’t be the first one who looks back on a rookie year such as that.

Cade Cavalli and MacKenzie Gore conclude the year being handled with white gloves, but at some point they’ll pitch and develop. Plus, it’s not hard to envision two or more of an effective group of relievers — Kyle Finnegan, Hunter Harvey, Mason Thompson and the injured Tanner Rainey — being useful in the future.

And that doesn’t touch on a farm system that still has holes but also has new life.

“They want to make sure that when we get new players, we establish something here right now, so when players come in they can say, ‘Hey, look, we’re here to freakin’ compete and win.’ I like that about them, because they talk about it. I hear them talk about it.”

It is, of course, talk. But as a lousy year draws to a close, it’s important to notice that it hasn’t been lost. The Nationals, and their fans, know lost seasons. The bottom for baseball in Washington was when the Senators left — twice — or the ugly summer of 2008. It wasn’t this year, as bad as it has been.