The U.S. looks wobbly. The World Cup is near. Can Gregg Berhalter fix this? 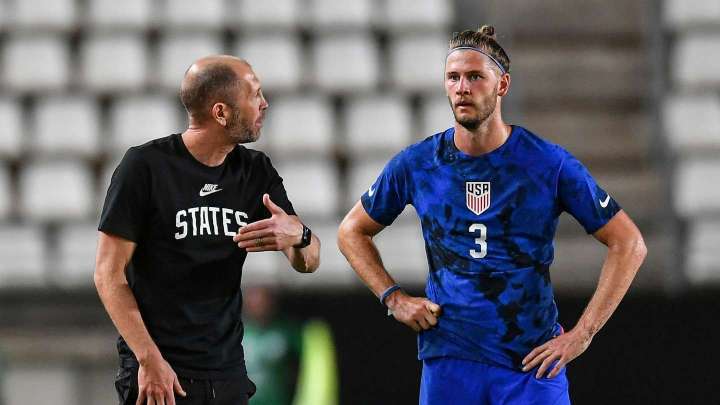 Gregg Berhalter has just weeks to straighten out his wobbly U.S. men’s national soccer team before the World Cup.

He’ll have to do it without any players.

Following a second consecutive dud Tuesday — a lifeless 0-0 draw with Saudi Arabia in Murcia, Spain — the group scattered to rejoin clubs throughout Europe, MLS and, in one case, Brazil. Seasons resume this weekend and employers want their players back.

The U.S. team will not reconstitute again until about a week before the World Cup opener against Wales on Nov. 21 in Qatar, leaving Berhalter and his staff on its own to solve myriad problems that surfaced in the friendlies against Japan (a 2-0 defeat in Düsseldorf, Germany) and Saudi Arabia over a distressing five-day stretch.

USMNT, with the World Cup looming, fails to impress vs. Saudi Arabia

Commonly, teams have a long runway to the sport’s ultimate competition following the conclusion of most league seasons. Bonds are strengthened, tactics are fine-tuned and players have time to heal from nine months of almost nonstop activity.

This year, the World Cup was moved to November-December from June-July because FIFA realized Qatar gets a tad warm in the summer. Now, though, the tournament has made a mess of the European league calendar.

Having already agreed to pause their seasons, the powerful entities running the Premier League, Bundesliga and others were not so inclined to also concede additional weeks for World Cup preparation.

So national teams will have to hit the ground running in Doha — or, in the U.S.’s case, try to avoid falling down the stairs.

“Now we have a fresh start,” attacker Christian Pulisic said, “and we’re going to go into that World Cup flying.”

Players will, in fact, fly to the World Cup. There was nothing to suggest in these last two tuneups the U.S. team will fly in the World Cup.

The nine-day camp in Europe promised to ready the Americans for the tournament, a final assembly to continue building momentum after a transformative few years. Instead, it exposed problems and cast doubt about whether Berhalter and the roster — which is expected to be the youngest in Qatar — is ready for their greatest test.

Most troubling was not the failure to win either match. It was the sight of a team, fearless and free during much of its rebirth since missing the 2018 World Cup, performing tentatively, lacking ideas and failing to problem-solve.

That falls heavily on Berhalter, who acknowledged he was as responsible as the players for the Japan performance. It didn’t get much better, though, against the weaker Saudi team.

In both matches, there was an absence of chemistry in the attack and few quality scoring chances. The team didn’t seem prepared to handle high pressure or unlock deep-lying resistance.

Surely, the Welsh, English and Iranian coaching staffs were taking notes ahead of their group matches against the United States.

It’s not like these friendlies were against defending champion France and 2022 favorite Brazil. Japan will struggle to advance out of a group that includes Germany and Spain, and Saudi Arabia has almost no hope in a quartet featuring Argentina, Poland and Mexico.

Berhalter said a lack of confidence led to subpar play. Confidence seemed like the last thing that would afflict his young charges. Consequently, his team performed like it had been tossed together for the first time.

The competition for roster slots also factored into the performances, Berhalter said. Many players, though, are locks.

“We know we can do better and we know we’ll have to do better,” midfielder Weston McKennie said. “This window is a learning lesson and get the last little jitters out, and hopefully whenever we get to the World Cup it will be how it used to be.”

From April: The World Cup draw is set. Here’s what that means for the USMNT.

The players’ priority over the next seven weeks is not on the national team, however. It’s on their clubs, which include big outfits like Chelsea (Pulisic), Juventus (McKennie), Arsenal (Matt Turner) and AC Milan (Sergiño Dest). Chelsea has 13 matches before the World Cup break.

A big issue for Berhalter is whether top players will receive consistent playing time from their clubs. Pulisic, Turner and Dest, among others, have been fighting to get on the field this season.

Because of the quick turnaround from league play to the tournament, national team coaches are bracing for players to drop out at the last minute.

“Do I think we have the best players in each position identified? Yes,” Berhalter said. “Do I think they’re all going to be available for the start of the World Cup? I don’t know. That’s just what every international manager we’ll be dealing with right now. We’ll be holding our breaths hoping that’s the case.”

Seven U.S. regulars missed this camp because of injury, including two vital ones: left back Antonee Robinson and midfielder Yunus Musah. Center back Chris Richards and winger Tim Weah were dearly missed. All four are expected back with their clubs soon.

Gio Reyna, a supremely talented but oft-injured teenage attacker, started both matches but left early Tuesday with another muscular ailment. The team said his departure was precautionary, but given Reyna’s history, Berhalter can’t be certain he’ll be available for the World Cup.

Although 26-man rosters are not due until Nov. 13, Berhalter plans to unveil his squad four days earlier. This camp, he said, provided clarity — not through superlative play but through shortcomings in training and matches.

There are about a dozen players who weren’t in camp but remain under consideration for a ticket to Doha. Most prominent on the list is striker Jordan Pefok, who, despite a fast start this season with Union Berlin, was passed over.

Berhalter said he wanted to take a hard look at forwards who hadn’t been with the team in a long time (Ricardo Pepi and Josh Sargent). Neither showed much. Nor did Jesús Ferreira, who sits atop the depth chart. The United States has gone scoreless in six of 12 matches this year.

In fairness, the forwards receive scant service from a glum midfield that lacked Musah’s punch.

After the Saudi game, Berhalter said he told his players to “use these next weeks to prepare, go back to your clubs, play in your games, get strong, get fit, and come to Qatar with an open mind-set and the idea that we want to compete there.”

Sage advice. But as Pulisic noted, “It’s everyone for themselves, in a sense.”