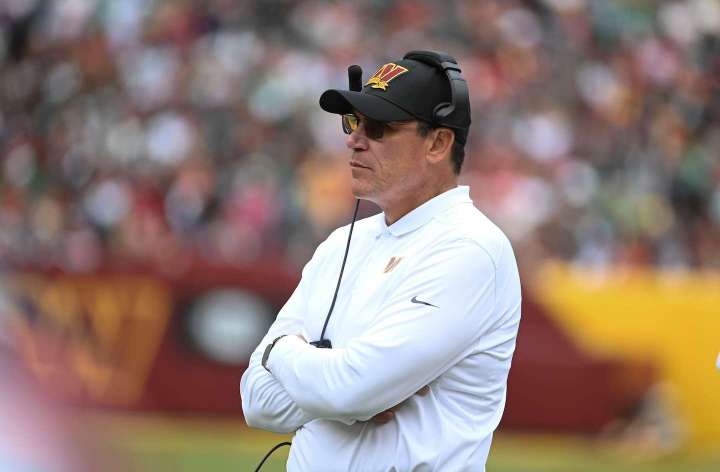 The last time Washington visited AT&T Stadium, where the Commanders will take on the Dallas Cowboys on Sunday, Ron Rivera’s team gave up the first 21 points and trailed 42-7 at halftime of an eventual 56-14 loss in prime time. At least Washington put points on the scoreboard in the first half of that debacle last year, something it failed to do while being outscored 46-0 in the first two quarters over the past two weeks.

Slow starts and three-touchdown first-half deficits have been alarmingly frequent for Washington in Rivera’s two-plus seasons at the helm. When the Philadelphia Eagles scored on the final play of the second quarter to take a 24-0 lead into halftime Sunday, it marked the seventh time in 36 games under Rivera that the burgundy and gold have allowed the first 20 points. That league-leading total includes the previous week, when the Commanders spotted the Detroit Lions a 22-0 halftime lead before mounting a comeback that fell short.

“Do you know how impossible that is to pull off?” The Team 980 host Kevin Sheehan said on his podcast this week. “In a league that is designed for all of these teams to be fairly close, to be down by 20 or more in 20 percent of the games you’ve coached so far by halftime? … It’s troubling.”

The Lions and Houston Texans have allowed the first 20 points of a game five times since 2020, and the Jacksonville Jaguars have done it four times during that span, according to data from TruMedia, but Rivera’s Commanders are in a class of their own when it comes to digging themselves early holes. Not surprisingly, they’re 0-7 in games in which they fall behind 20-0 or worse over the past three years.

The frequency with which Rivera’s teams have fallen behind 20-0 or worse over the past three years is staggering, especially compared with Washington’s other coaches in the Daniel Snyder era. Mike Shanahan also saw his Washington squad fall behind 20-0 seven times, but that was over 64 games. Jay Gruden’s teams trailed 20-0 or worse five times over 85 games. Washington had less frequent ugly starts under Steve Spurrier, Marty Schottenheimer, Joe Gibbs and even Jim Zorn.

During Rivera’s nine years as coach of the Carolina Panthers, his teams allowed the first 20 points of a game only five times. It happened in his first loss with Washington, a 30-15 defeat in Week 2 of the 2020 season that saw the Arizona Cardinals take a 20-o lead into halftime.

“We hurt ourselves in the first half when you go back and look at it,” Rivera said after that game.

Say this for Washington: It’s done a decent job of not getting blown out. The Commanders’ 11 double-digit losses since 2020 are the eighth-most in the league. Their three 20-point losses over the past three seasons are fewer than 13 teams, including the Lions, Jaguars and New York Jets, who have nine apiece. Last year’s home game against the Cowboys, in which Washington trailed 24-0 at halftime and lost 27-20, is a perfect example of the team’s tendency to rally to at least make things interesting after falling behind by multiple scores.

“I feel like I let [the fans] down,” Rivera said after that loss. “I wanted them out here to cheer for us, and we should have given them a better first half. We gave them a very good second half, something to cheer about. … But that’s football, and that’s what happens.”

It just doesn’t usually happen like this, and so often.

On Sunday, Washington will look to avoid being shut out in the first half of three consecutive games for the first time since 1965.

“You’re not going to win too many games without putting any points on the board in the first half like we have in the last few weeks,” wide receiver Terry McLaurin said after Sunday’s loss. “We all know that, and we all have to take individual accountability for that and improve.”