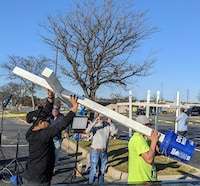 The Nov. 24 front-page article “Another week of killings adds to America’s trauma” reported that Virginia Gov. Glenn Youngkin (R) said, after the recent University of Virginia and Chesapeake Walmart shootings, that now is not the time to discuss legislative solutions to prevent gun violence. Now, he said, we need to support the families of the dead.He also suggested we need to “understand” these cases.

Why? Without them we don’t have enough such cases already studied? There were other Virginia college shootings already this year. The commonwealth unfortunately was home to the 2007 Virginia Tech shooting that left 32 dead. Its study is complete. Do we really need to wait for more shootings to understand our uniquely American epidemic of gun violence, while hoping and praying that we’re not next?

Sadly, far too many families spent Thanksgiving grieving their loved ones, thousands of lives lost in hundreds of cases of gun violence, who populate the studies that our governor finds insufficient to act on to stop this carnage. We have too much data already on our gun crisis and what contributes to it.

The governor is right that now is not the time to act. The time to act was yesterday. Thinking, praying and studying are good, but acting is necessary.

Regarding the oft-cited connection between gun violence and mental illness, as if addressing the latter could end the former, several points must be made:

We don’t have a reliable way to determine who, of the many who make threats, will actually act on them. We don’t have evidence-based methods to treat such people and ensure safety. (How many stories are there of parents who tried for years to get help for their troubled kids?) We don’t have anywhere near the capacity to treat all potential perpetrators. The situation for those without resources is even more dire. The typical profile of the troubled young person and potential perpetrator is of one notoriously resistant to any mental health help.

We do, however, know that limiting access to lethal means (mainly guns) is the single best way to reduce deaths from suicide and homicide.

The Post’s coverage of recent mass shootings continues to focus on the motives of the murderers. Motives are irrelevant, and to focus on determining them diverts attention from the real problem: ready availability of guns. It is possible to identify dangerous psychopaths. It is also possible to identify the suppliers of dangerous weapons. The unending epidemic of murders must be countered with stronger gun-control laws and a determination to enforce them.