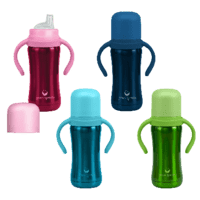 A children’s stainless steel sippy cup has been recalled due to a lead-poisoning hazard.

Green Sprouts, maker of reusable and natural baby products, discovered that some of its cups were made with a small piece of metal that contains lead. This piece is typically inaccessible, but when the bottom of the cup is broken off, the lead piece is exposed. The company’s voluntary recall affects about 10,500 cups. They are sold at Whole Foods, Buy Buy Baby, Amazon and bedbathandbeyond.com.

“Testing of this component was omitted by the CPSC-approved third party lab because this part of the product is inaccessible under normal use,” the company said in a statement. “Had we been aware that a component containing lead in these products could become accessible, we wouldn’t have put them on the market; now that we know, we are voluntarily recalling these products.”

The company received seven reports of the base breaking off, exposing the small piece, called a “solder dot.” No injuries have been reported.

This recall isn’t entirely unusual: Bentex children’s clothing sets, specifically clothing in Disney-themed styles for young children, was recalled Nov. 23 because of lead in the textile ink on the clothing. About 87,000 units, sold at retailers such as TJ Maxx and Amazon.com, were involved. The CPSC website contains the item and batch numbers of the clothes involved in the recall.

“We are always concerned about lead,” said Patty Davis, Consumer Protection Safety Commission spokesperson. “The good news is that these were caught and recalled.”

Lead poisoning is extremely dangerous and toxic if ingested by children, and can cause neurological impairments, developmental delays and other serious health issues. Currently, the biggest and most common risk of lead poisoning to children is old lead-based paint used in houses. Water in Flint, Mich., had dangerously high levels of lead leading to a horrific human and environmental disaster, starting in 2014.

There is a strict lead limit on children’s products. In 2008, Congress passed a law limiting the amount of lead and other chemicals permitted in products, along with other toxic chemicals. This year, the CPSC seized 2 million products that did not meet U.S. safety standards, and 300,000 of those contained lead.

Many products that were not made recently, or come from other countries, do still contain lead. Also, parents need to be mindful when they purchase goods second-hand. The CPSC recommends checking a product on its website to see if it has been recalled before trying to resell.

Consumers can sign up for recall notices at CPSC.gov.