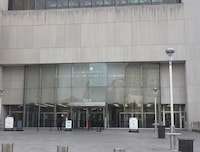 Disenfranchising a city of more than 700,000 people, it turns out, requires a lot of work, if the contretemps between the D.C. municipal court system and the U.S. Senate is any indication.

The D.C. Superior Court and the D.C. Court of Appeals — which handle criminal, civil and administrative matters for D.C. residents — are once again running short on judges. The former is missing 14 of its 62 judges, while the latter is missing two of its nine judges — and one of those slots has stood vacant since November 2013. Filling the vacancies isn’t as simple as tendering job offers to seasoned lawyers. Under D.C.’s Home Rule Act, the Senate must approve all appointees to the D.C. courts and the president chooses nominees from a list of candidates supplied by the D.C. Judicial Nomination Commission.

If this sounds strange, that is because D.C. is the only jurisdiction in the country where local judges must clear the Senate’s “advice and consent” process. Unlike elsewhere, the federal government funds the local D.C. courts. Per a couple quirks of history — the city’s orphaned political standing and its dependence on Senate machinations under the Home Rule Act — the District’s provincial priorities are forced to compete for legislative attention against the country’s most pressing issues.

The Post’s Meagan Flynn and Michael Brice-Saddler reported last week that D.C. officials have pressed both President Biden and Senate Majority Leader Charles E. Schumer (D-N.Y.) to fix the courts’ vacancy problem. Both would play a role in ending the crisis — Mr. Biden by nominating candidates for eight vacancies, and Mr. Schumer by holding floor votes on another eight nominations that the president has already made. “Given the significant impact the current number of judicial vacancies has had on our courts, swiftly confirming these nominees is crucial to the administration of justice in the District,” wrote members of the D.C. Council in a letter to Mr. Schumer.

That is an understatement. At a Senate hearing last year, a D.C. Court of Appeals nominee described the problem: “If you’re seeing a five-year delay from when an appeal is filed until when an opinion comes down? That causes the public to lose confidence, especially when we’re dealing with cases involving child custody, abuse and neglect, criminal cases. There needs to be swift justice.”

What’s more, the D.C. courts are required under law over the next few years to broaden the range of misdemeanor offenses that trigger jury trials — a burden that court administration estimates will translate into two to four times more jury trials per year. “This isn’t politics, this is life and justice,” said Douglas Buchanan, a spokesman for the D.C. courts who has made similar pleas in the past.

But it is politics, unfortunately. Both the Senate and the White House are in Democratic hands, which might suggest that predominantly Democratic D.C. would get quick action on such a consequential municipal function. That is not the case: During Congress’s current lame-duck period, Mr. Schumer is driven by legislative priorities, including defense and federal government funding, an initiative to reform the Electoral Count Act and possibly raising the federal debt limit. The plan is to move these items while the Democrats still have a majority in the House; once that body passes to Republican control in the new year, the Senate can focus on judicial nominations, which do not require House action.

The Senate’s foot-dragging on D.C.’s judge shortage is thus both inexcusable and understandable. The Senate is supposed to care as much about a jurist who will preside over a trial for an assault on Wisconsin Avenue as a bill to safeguard U.S. democracy. Again, that’s a bind in which no other municipality operates.

The uncontroversial nature of D.C. court nominations should mean that Senate consideration is a procedural formality. That’s not the case, either: Nearly a year ago, Republican Sen. Rick Scott of Florida objected to approving D.C. judges by unanimous consent. “I have absolutely no faith that Joe Biden’s radical far-left nominees will uphold the rule of law,” Mr. Scott said. Such maneuvers force the Senate to devote precious floor time to the approvals.

Del. Eleanor Holmes Norton (D) proposed a solution in 2021 that would institute a 30-day congressional review period for D.C. court nominees. Under the plan, a nominee would automatically join the D.C. bench unless Congress issued a joint resolution opposing the nomination. The bill has no sponsor in the Senate, meaning that it suffers from the same problem it seeks to resolve. Such is the District’s feedback loop of powerlessness.