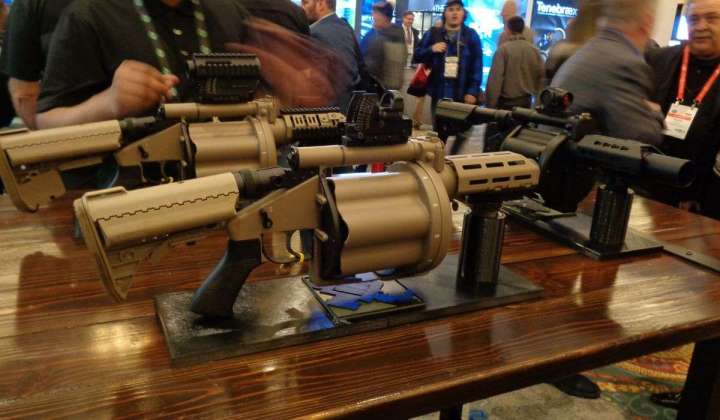 LAS VEGAS — Russia’s war in Ukraine and China’s growing threats against Taiwan have sent militaries from both regions on shopping sprees in an unlikely locale: the No. 1 gambling destination in the U.S.

Poland, Romania and the Baltic States sent homeland defense delegations to the SHOT Show 2023 exposition to purchase some of the latest small-arms warfare offerings, machine guns and related military gear.

Taiwan, Japan, the Philippines and other Asian states also were among the foreign nations that sent delegations. Some surprising visitors were contingents from China and North Korea.

European and Asian nations are responding to growing fears of war and the need to prepare the kinds of volunteer militias and civil defense forces that sprang up in Ukraine after Russia’s invasion nearly a year ago.

More than 52,000 people attended the three-day event through Thursday at The Venetian resort and casino, where more than 2,500 companies showed off arms and equipment.

SEE ALSO: No kickbacks: Army veteran says he has built a better rifle for battlefield

Hubert Marciniak, a Polish defense contractor, said his government is concerned that Russian aggression could spread. As a result, Warsaw is bolstering ground and air defenses while Poland hosts millions of war refugees from neighboring Ukraine.

In addition to buying M1 Abrams tanks, F-35 jets and High Mobility Artillery Rocket Systems, or HIMARS, from the U.S., Poland is equipping troops and border guards with new weapons, most made domestically.

Polish special operations forces were buying Heckler & Koch compact machine guns on display at the expo as part of its defense buildup.

“Russia is our neighbor. But it’s also a crazy neighbor, so we need to be prepared for what they are doing,” Mr. Marciniak said.

The Polish military is providing 60,000 new machine guns to its troops and border guards and to its new civil Territorial Defense Force.

For Polish special operations troops, “the machine guns are usually from the U.S.,” he said, noting the Heckler & Koch and two other models.

Military officials from Taiwan, Japan, South Korea and the Philippines were walking the aisles and visiting the booths to look at the hundreds of automatic weapons and other military equipment on display.

Taiwan’s government is stepping up military training to confront a growing threat from Beijing. Taipei recently announced a tripling of compulsory service from four months to one year.

The more extensive military training is a response to increasingly belligerent language from China and lessons learned watching the course of Russia’s invasion of Ukraine.

A Japanese official declined to comment on Tokyo’s shopping list. Asked whether the Japanese military was buying or selling at the show, a female member of the delegation said tersely, “Buying.”

Edmund Villavicencio, an arms buyer with the Negros Sports Exchange Guns and Ammo group in Bacolod City, Philippines, said his country had loosened gun ownership restrictions because of concerns about Chinese military expansion.

“We’re being lenient in allowing civilians to own guns,” Mr. Villavicencio said. “With all the tensions that are happening around Asia right now, they just want to defend themselves in response to whatever insurgencies or invasions may happen.”

The expo also included the latest technology for warfare.

At the high end of the spectrum was a multibarrel machine gun that could fire up to 2,500 rounds a minute. Also, the maker of a new electronic warfare system said it could knock out nearly two dozen drones at once.

Many of the militaries were looking for newer and advanced weapons in case Russian and Chinese conflicts engulf their regions in broader wars or even a global conflict.

Despite a vast flow of U.S. and Western security aid over the past year, Ukraine sent a military delegation to the Las Vegas exposition. U.S. officials expected Kyiv’s armed forces to spend some of the $27 billion in U.S. aid on American weapons at the show.

The annual arms show is hosted by the National Shooting Sports Foundation, which provided The Washington Times with a list of the 115 foreign nations either selling or buying small arms and military and law enforcement equipment.

“Based upon my military background, there is always an interest in providing the best product you can for your military so they can be successful in their missions,” Mark Oliva, director of public affairs for the foundation, said of the foreign arms shopping.

A U.S. official at the conference said Chinese spies were active at past shows. Some were observed conducting covert electronic listening operations from backpacks.

One of the more surprising participants was a delegation from North Korea, the rogue state under heavy sanctions from the U.S. and the United Nations over its nuclear weapons programs.

Asked why North Korea was allowed to take part, expo spokesman Robert Brooks said: “NSSF can confirm the inclusion of North Korea on this list is correct, but we are unable to disclose any additional information.”

The North Koreans likely were allowed to take part so U.S. intelligence agencies could find out what kinds of arms the government was interested in copying or selling.

The Commerce Department official said such delegations are strictly monitored during their visits.

Delegations of nations facing Chinese military expansion in the South China Sea included Indonesia, Malaysia, Thailand and Vietnam, along with military and defense officials from Japan and South Korea. No details of any small-arms purchases could be identified from those nations.

Browsers got early looks at some cutting-edge munitions, including the XR338 five-barrel machine gun. Known in military circles as a “mini-gun,” it is modeled after the military’s M134 gun deployed on attack helicopters and C-130 gunships, but with a longer range.

“This is the most lethal gun in the world,” said a spokesman with Radical Firearms, one of two manufacturers of the gun, along with DTV Arms.

The mini-gun was built in the past three months. It includes a battery-powered firing mechanism that allows gunners to increase the rate of fire just by pulling the trigger.

Radical Firearms was offering a separate .308 caliber version with six barrels. Two other models with different calibers are expected to be unveiled in the coming months.

One of the biggest emerging military threats involves drone aircraft, which can be used for intelligence gathering, electronic warfare and gun or missile attacks. A hot military and civilian item sold at the expo was the HH-SP1, a counterdrone zapper that the manufacturer said is capable of knocking out intruding drones within a nearly 2-mile radius.

The square jammer is built by Vigilant Drone Defense, a Los Angeles company that has sold the device to the U.S. military and for civilian drone defenses.

A more advanced model can provide 360-degree defenses against drone swarms up to 3 miles.