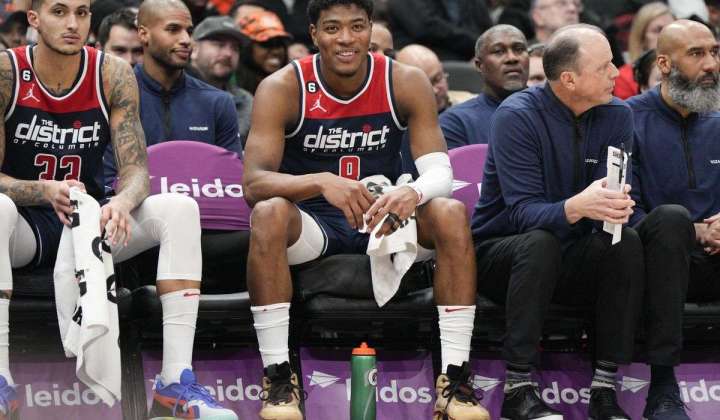 The trade was completed just days after Hachimura said “no comment” and smiled when asked if he requested a trade from the Wizards. Hachimura, the ninth overall pick in the 2019 draft, was excused from Monday’s practice for personal reasons, coach Wes Unseld Jr. said.

Hachimura had been stuck in a bench role this season, averaging 13 points in 24.3 minutes per game.

That “somewhere” is apparently in Los Angeles. The Lakers (22-25, 12th in the West) were in need of scoring and size as they look to climb up the standings amid a competitive playoff race. Hachimura, who is 6-foot-8, will likely receive an expanded role with the Lakers, including an opportunity to start.

ESPN, which first reported the trade, reported that the Lakers intend to sign Hachimura to a long-term deal this summer once the 24-year-old hits restricted free agency this summer.

The Wizards and Hachimura failed to agree on a contract extension in October — the deadline for teams to reach extensions for players in the final year of their rookie scale contract. Those unsuccessful negotiations became a precursor for trade talks, which appeared to pick up last week when The Athletic reported that Washington had begun discussions with several Western Conference teams for Hachimura.

Nunn, the player that Washington acquired, has averaged 6.7 points in just 13.5 minutes per game this season. The 27-year-old, who has been in the league since 2019, gives the Wizards additional depth at point guard. He is in the final year of a two-year, $10.3 million contract.

The move also saves the Wizards more than $1 million on the club’s payroll and helps clear up a logjam at power forward.  Hachimura had been vying for time behind starters Kristaps Porzingis and Kyle Kuzma and competing for minutes with 2020 first-rounder Deni Avdija off the bench.

Kuzma, meanwhile, has also been subject to trade rumors as he is expected to decline his $13 million player option this summer and become a free agent. But the Wizards reportedly have no interest in trading Kuzma, who Washington wants to retain beyond this season. Kuzma has averaged a career-high 21.8 points per game in 2022-23.

The Lakers and Wizards have a history of doing business together as they completed a complex five-team deal in the summer of 2021 that sent guard Russell Westbrook to the Lakers and netted Kuzma.

By moving on from Hachimura, Tommy Sheppard parted ways with the first first-round selection of his tenure as Washington’s general manager.

Hachimura’s selection allowed the Wizards to tap into a new section of fans, expanding into the Japanese market by hiring a Japanese correspondent to cover the team and partnering with a Tokyo-based company that sponsored Hachimura’s press conferences.

Sheppard initially touted Hachimura as a “late bloomer” with considerable upside. But the forward was slow to develop, particularly on the defensive end. Last season, he missed roughly half the year for a mental health break — an absence that paved the way for him to come off the bench full-time.