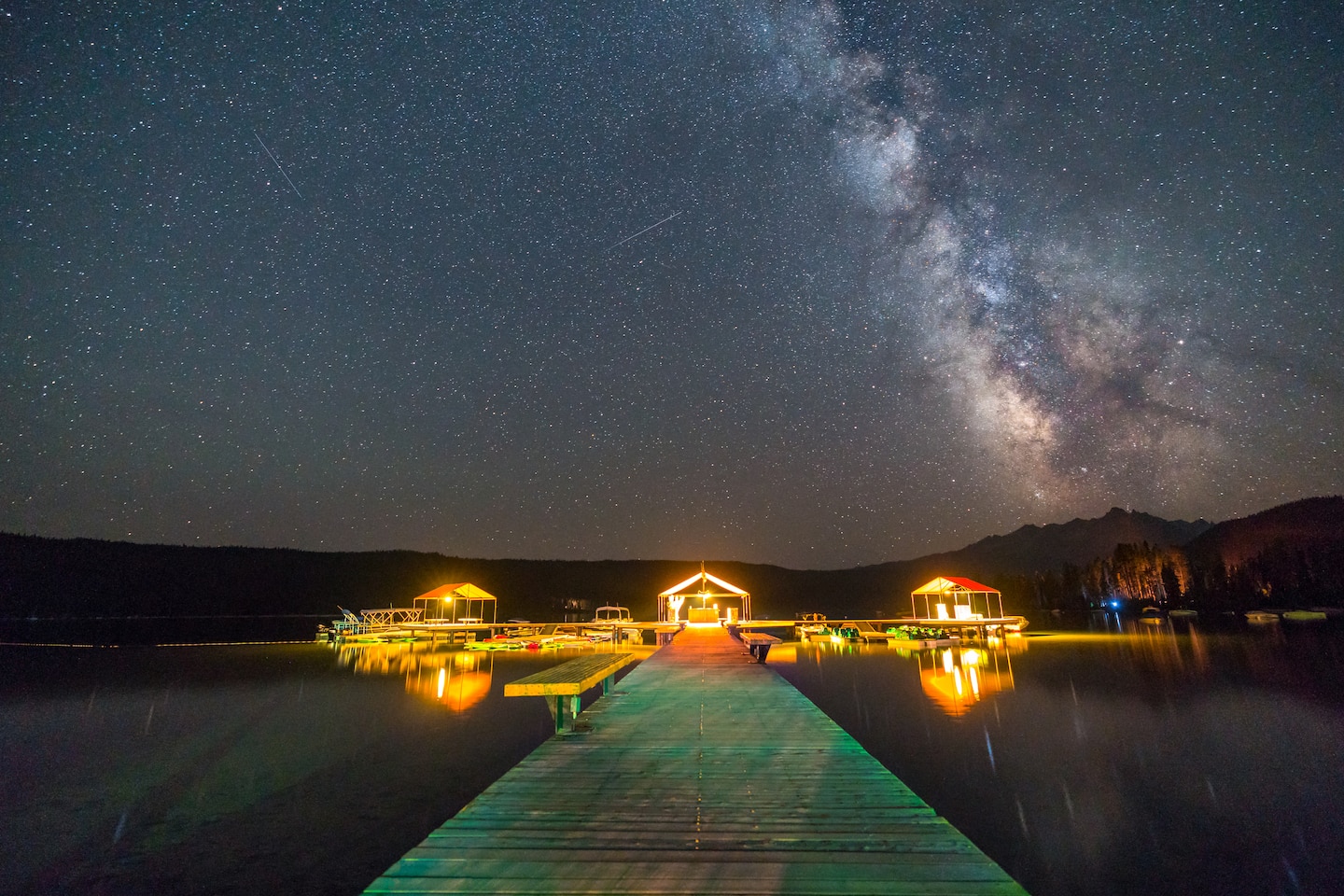 Enveloping it all is the Milky Way, a blaze of light among the flaming stars over the Central Idaho Dark Sky Reserve, a 1,416-square-mile territory that has the clearest skies in the continental United States. It stretches into parts of four counties — Elmore, Blaine, Boise and Custer — and its remote locale is bringing in the tourists.

Less than three months ago, Blaine County, which covers the southern edge of the reserve, had one of the highest coronavirus rates in the world. Thanks to skiers from around the globe flocking to its world-famous Sun Valley Ski Resort, its rates of the novel coronavirus per capita outstripped even New York and Italy. Celebrities with homes in the area stayed away; hotels and ski lifts closed, and the local hospital partly shut down because half of its doctors were infected.

Since then, Idaho reopened quickly, compared with other states. It was scheduled to complete the fourth stage of its reopening plan on July 10, although this may be extended because of a recent spike in the Boise area, a three-hour drive away from Sun Valley and its sister city Ketchum. A study released in June revealed that 23 percent of Blaine County’s adult population has antibodies to the virus (although it’s still unclear how much protection antibodies provide).

The state’s tourism boards have come up with ways to create a socially distanced paradise in Idaho’s plentiful wilderness areas for vacation-starved travelers. The Sun Valley tourism board now sports a new slogan: “Mindfulness in the mountains.” The website for McCall, a rural community 120 about 200 miles to the west of Sun Valley, adopted “Protect your mountain playground” as a slogan, and is using the hashtags #recreateresponsibly and #spreadlovenotcovid.

“We want to welcome people back, but we want to be in protect mode,” says Laurie McConnell, who does marketing for Visit Idaho. “Small towns don’t have large hospital or first-responder capacity. It’s getting people to be respectful of what they are traveling to.”

The Sawtooth National Recreation Area, which encompasses 756,000 acres just north of Sun Valley, opened 29 picnic areas and campgrounds on June 5. The Salmon-Challis National Forest, which covers 4.3 million acres farther to the north, opened an even wider swath of facilities on June 13. Visitor levels over the Fourth of July weekend were on par with other years, tourism officials said.

For many of the people filling campgrounds and remote lodges, the main attraction is the Dark Sky Reserve, said to have the best stargazing in the country.

There are only 16 such reserves in the world, and Idaho’s, established in late 2017, is one of only two in North America. (The other is Mont-Mégantic in Québec.) A group of local activists and residents spent several years creating the Idaho reserve along the specifications of the Arizona-based International Dark Sky Association. For example, cities in the reserve had to switch street lighting to lamps that direct light toward the ground rather than toward the sky, where it causes light pollution.

Stargazing is best during parts of the month when moonlight is minimal. Other sought-after times are during meteor showers. The most abundant are the Perseids, which begin in mid-July and climax on Aug. 12.

For those who would like to see the stars but would prefer not to camp, there are plenty of lodging options and other visitor services in Sun Valley and the neighboring cities of Ketchum, Hailey and Stanley. Ray Gadd, marketing director for Visit Sun Valley, says the town’s restaurants and hotels are all open but that most venues are asking guests to keep six feet between them and other sightseers.

“We had such an impact of covid cases here that could be attributed to visitors, so in an effort to mitigate the spread of the virus and not overwhelm our resources, we wanted to get out in front of it,” he said. “We’re asking people to think through what their trip means and how they can protect themselves and the community. This is not a virus vacation or a place to quarantine or hide out. Embrace this place as your own and respect it.”

Sixty miles north of Sun Valley/Ketchum and in the middle of the reserve, hotel rooms and restaurants are full in the tiny town of Stanley, says Jason Bosley, director of the Stanley-Sawtooth Chamber of Commerce.

The owners of the nearby Redfish Lake Lodge, one of the area’s most popular destinations, also say business is doing well. There were no vacancies in their 40 lakeside rooms and cabins (prices range from $94 for some lodge rooms to up to $767 for cabins) plus another 39 rooms in town over the Fourth of July weekend.

“We’ve had out-of-state cancellations, but they’ve been filled up by local folks,” says Austin Clegg, manager for guest relations. “We were anticipating a big drop so we’re grateful to be open, frankly.”

The lodge has added sneeze guards and plexiglass in the main lobby and general store, installed an outdoor bar, and limited the seating in its dining room to 50 percent capacity. High-traffic areas, such as the marina, restrooms and front porch area, are routinely disinfected by staff members.

Clegg said plans are to have “star floats,” starwatching parties on the lodge’s pontoon boats around the time of the new moons, which are July 20 and Aug. 19 this summer, for amateur astronomers to view the Milky Way.

Matt Benjamin, a Boulder, Colo., astronomer who helped create the Central Idaho Dark Sky reserve, has spoken at these star floats in the past. While the region has too much rain and snow for research telescopes, he has seen regional astronomy clubs show up at the reserve in recent years.

“Where I see the Dark Sky Reserve providing some added benefit to researchers is in the amateur astronomy field,” he says. “This group of capable and motivated people are responsible for a surprising number of comet and asteroid discoveries.”

There are other late-night stargazing options for travelers who don’t wish to venture far from the comforts of Sun Valley. The Sawtooth National Recreation Area visitor center is located about seven miles north of town on State Route 75. Its restrooms and parking lot are open all night for the benefit of stargazers. There are many pull-offs farther along Route 75 for those who wish to hop out and see the night skies.

The Galena Lodge, some 23 miles north of town, has a funky, bohemian feel and includes a restaurant (complete with monthly “full moon” parties), bike rental and gift shop. There’s nearby camping, and the lodge rents out four yurts, which cost $100 to $125 per night in the summer and $150 to $200 per night in the winter.

From there, it’s a roughly seven-mile drive up a 6 percent grade until Route 75 reaches Galena summit at 8,700 feet. The roadside is well marked with light reflectors, making it easy to drive at night. Park at the Bethine and Frank Church Overlook, named after the late Idaho senator and his wife, and enjoy the best view in the whole reserve. (Frank Church once said: “I never knew a man who felt self-important in the morning after spending the night in the open on an Idaho mountainside under a star-studded summer sky.”) Several mountain ranges are visible from here, including the Sawtooth Range, of which you can see more than nine peaks that are at least 10,000 feet high. Visitors who come late at night will be struck by the almost eerie silence under a vast heavenly canvas.

Although the funds are not available for a planetarium, Boise State University is introducing a mobile observatory to the reserve in the near future. Until then, bring a telescope, and go low-tech with an iPhone app that, by simply pointing the phone toward the night sky, unlocks the beauty of the cosmos.

Duin is a writer based near Seattle.