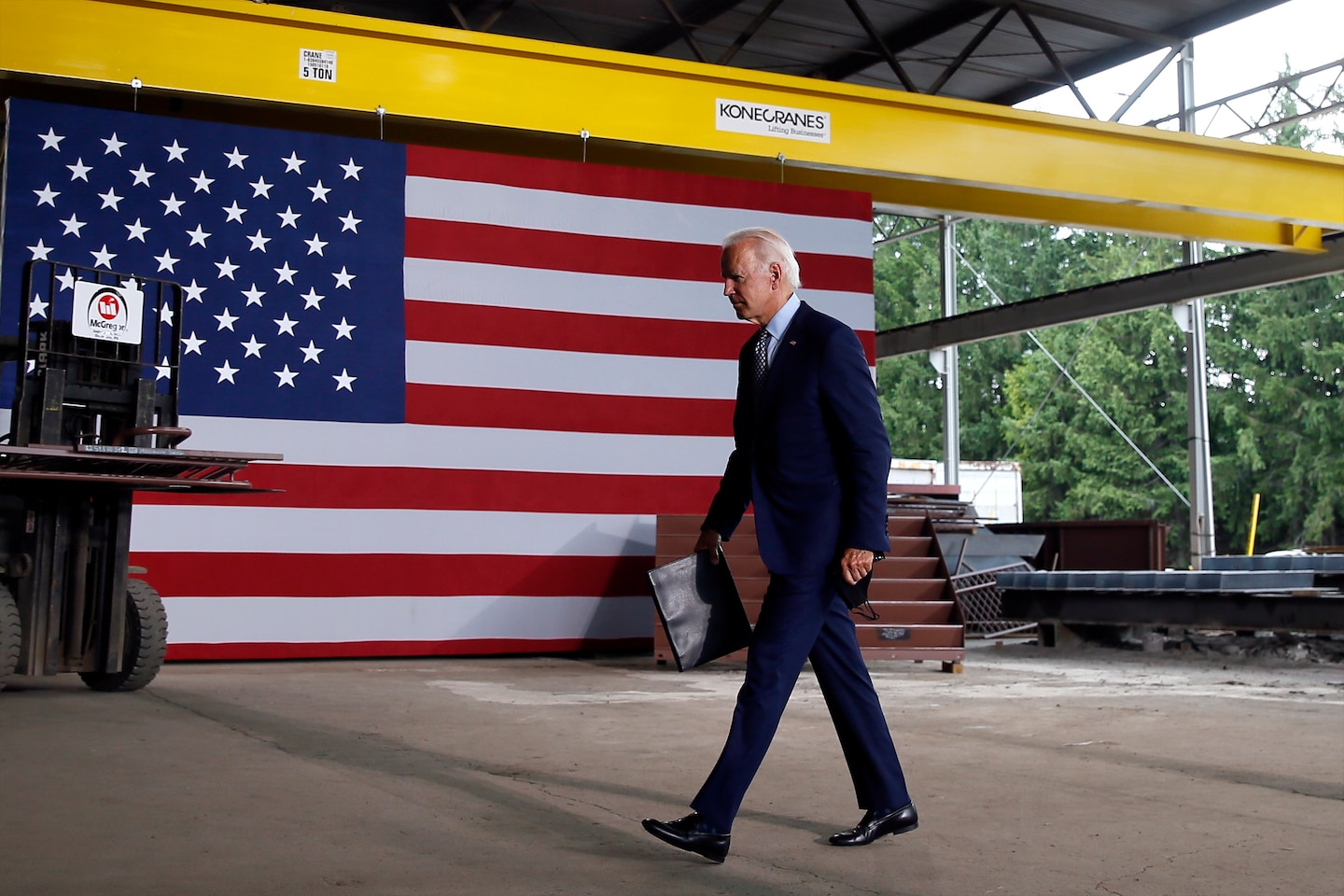 He also advocated a 100-day “supply chain review” that could require federal agencies to buy only medical supplies and other goods manufactured in the United States. And he urged an end to loopholes that let procurement officers and federal contractors get around existing “Buy American” clauses.

The announcement marked an effort by Biden to begin laying out his agenda in more detail after months in which his central message was Trump’s failures. It also amounted to a recognition that while Trump trails in the polls, many voters support his handling of the economy.

The president has been arguing for months that the economy will regain its momentum when business, restaurants and other operations are allowed to reopen. Some Trump allies were frustrated Thursday that Biden offered his plan before the president announced a similar “Buy American” proposal that officials say has been held up for months amid internal White House objections.

“They are essentially trying to steal the Trump program of 2016 and steal that playbook,” Trump’s former chief strategist Stephen K. Bannon said on his radio program. “For some reason, the White House and the campaign have been caught flat-footed. Biden has very smart people around him, particularly on the economic side.”

Biden’s pitch underscores a striking shift in both parties away from globalization and free trade and toward protecting American workers and revitalizing struggling domestic industries. Those trends have been accelerated by the coronavirus pandemic, which has wreaked havoc on the economy.

Biden said Thursday that his plan would restore the jobs lost this year and create 5 million new ones. It amounted to the most forceful case he has made for reducing dependence on foreign countries to supply the United States with essential goods.

Biden repeatedly castigated Trump and sounded populist notes that were reminiscent of his more liberal primary challengers. He stressed the need to protect workers and Main Street rather than the “wealthy investor class” and “bankers and CEOs.” He declared that “enough is enough,” saying it is “time to reverse the priorities in this country. It’s time to help small businesses, middle-class folks, manage their way through the pandemic.”

Trump’s rise in 2016 was built heavily on promises of bringing back American jobs, as well as blaming immigrants for hurting American workers. As president, he has stoked a trade war with China and imposed tariffs that flew in the face of his party’s orthodoxy.

Vice President Pence was also in Pennsylvania on Thursday, touting Trump’s economic performance in a talk to business leaders in the borough of Malvern near Philadelphia. While 22 million jobs have been lost during the pandemic, the country has regained 7 million of them, Pence said.

We see “this country coming back because of the solid foundation that was put in place” by the Trump administration, Pence said, including lower taxes, less regulation, more U.S.-produced energy and better trade agreements. He called it “the great American comeback.”

Still, Trump’s efforts to revive domestic manufacturing produced uneven results even before the pandemic. There were fewer manufacturing workers in Wisconsin this January than there were at any point under the Bush administration, for example.

Biden, who once supported the North American Free Trade Agreement and Trans-Pacific Partnership, has in contrast focused his current campaign on prioritizing American industries, following the lead of Sen. Bernie Sanders (I-Vt.), the democratic socialist who was his top rival for the Democratic nomination, and Sen. Elizabeth Warren (D-Mass.), who released a “Plan For Economic Patriotism” during the primary and has undergone vetting by Biden’s campaign to be his running mate.

Biden and Warren’s teams consulted closely on the new plan, according to two people with knowledge of the situation, who spoke on the condition of anonymity to describe private talks.

The plan won some praise Thursday from liberal leaders. “All in all, on the right track,” Columbia University economics professor Jeffrey Sachs wrote in an email to The Post. Sachs supported Sanders for president and now backs Biden.

Biden’s new platform focuses heavily on using the power of the federal government to promote a U.S. domestic manufacturing base. The $400 billion procurement initiative would be spread over four years to spur demand for American products and services, as would the $300 billion investment in research and breakthrough technologies. Half of the $300 billion would go to clean-energy initiatives and were previously announced.

“How are you, man?” Biden asked a worker. “I keep distance,” the worker said. Biden wore a mask throughout the tour.

Later he delivered his remarks outside at a covered loading dock. It started raining, and Biden invited attendees to seek shelter under the covering as the water loudly pelted the steel roof. Some workers took him up on his offer.

Circles were placed in front of Biden’s lectern to encourage listeners to stay within them and maintain social distancing. Reporters had their temperatures taken and were asked coronavirus screening questions as they entered.

Biden broadened his argument against Trump beyond the economy, criticizing his defense of Confederate symbols, which has been the subject of ongoing debate in the presidential race. Trump is “determined to drive us apart to keep his base in place,” the former vice president said.

Holding a significant lead in the polls, Biden is seeking to close off any possible openings for Trump to make the contest more competitive. He said he plans to unveil proposals next week on infrastructure and clean energy, the second part of what he bills as the “Build Back Better” plan. The other two components are caregiving and education, and racial equality.

Both campaigns are gearing up for an escalating clash over the economy, a normally dominant theme in presidential elections. Trump argues that he built a booming economy before the coronavirus outbreak and could do it again. Biden blames Trump for his erratic reaction to the pandemic and frequent flouting of public health advice, which he says fueled the alarming rate of infections and badly damaged the economy as a result.

On the Republican side, White House advisers and allies worried about Biden’s “Buy American” push, with Bannon saying on his radio program that the Democrat’s rollout could help him in such states as Pennsylvania, Michigan and Wisconsin, which Trump narrowly won in major 2016 upsets.

Trump aides said the president remains the obvious person to reignite the economy as he has done before.

“President Trump’s policies of lower taxes, deregulation, reciprocal trade and energy independence built a booming economy once, and they will do so again under his leadership,” said Judd Deere, a White House spokesman.

That executive order has languished for months, however, amid objections by some of Trump’s other senior advisers, including Treasury Secretary Steven Mnuchin and Trump’s son-in-law Jared Kushner, who have warned that it could lead China to limit the supply of personal protective equipment, or PPE, that it is sending to the United States.

Some analysts said the executive order could now be signed swiftly, but it remained unclear Thursday when or whether that would happen.

When it comes to Biden’s plan, the Democrat’s campaign says he will finance the ongoing costs of his economic agenda by reversing some of Trump’s tax cuts for corporations and imposing “common-sense tax reforms that finally make sure the wealthiest Americans pay their fair share.” The campaign declined to provide a more detailed accounting of how it would pay for the $700 billion in spending it proposed Thursday.

A senior Biden campaign official said more specific details would be released once the full plan is out, speaking on the condition of anonymity because the campaign did not authorize the person to speak on the record. Those details would include a stimulus package, which Biden believes will be needed, and continuing costs, the official said.

Biden often touts his central role in the Obama administration, but he has been less eager to tout the administration’s championing of the Trans-Pacific Partnership (TPP), which proved controversial with the party’s union base. Labor leaders said it did too little to require America’s partners improve their environmental and labor standards.

Trump highlighted the shortcomings of the TPP and other trade deals in his 2016 campaign and rejected it upon taking office. Biden has said he wants to renegotiate the agreement, which includes several Asian countries and which supporters say could serve as a bulwark against China’s influence. Thursday’s plan calls for using tax dollars to “stand up to the Chinese government’s abuses, insist on fair trade, and extend opportunity to all Americans.”

“Trade negotiations over big trade deals is something that in sequence will follow a dramatic set of domestic investments,” said the senior Biden campaign official. In addition to closing loopholes around existing “Buy American” clauses, Biden is pushing for a crackdown on false advertising of “Buy American” goods.

Since the end of the Obama administration, many Democrats have backed off the TPP and focused instead on directly promoting domestic production. Bipartisan momentum has grown in recent weeks for tax incentives for companies to onshore their supply chains, in part because of the gaps in U.S. medical supply production exposed by the pandemic.

The nation is facing a new shortage of personal protective equipment, including of N95 masks and medical gowns, as cases rise. But bringing supply chains back to the United States could prove difficult, and the Trump administration has struggled to do so.

A Biden administration, like the Trump White House, would face the prospect of foreign retaliation for any promotion of American companies. “Buy American” provisions are also likely to face objections from U.S. firms that would see their costs increase if forced to buy more expensive supplies. Senior Biden officials said Wednesday that their plans were carefully vetted and do not run afoul of World Trade Organization rules.

“Incentivizing companies to raise their costs by ‘Buying American’ is not going to fix almost two decades of low productivity growth — it’s going to take us in the opposite direction,” said Adam Ozimek, chief economist at Upwork. “This will just create higher costs for American businesses and consumers.”