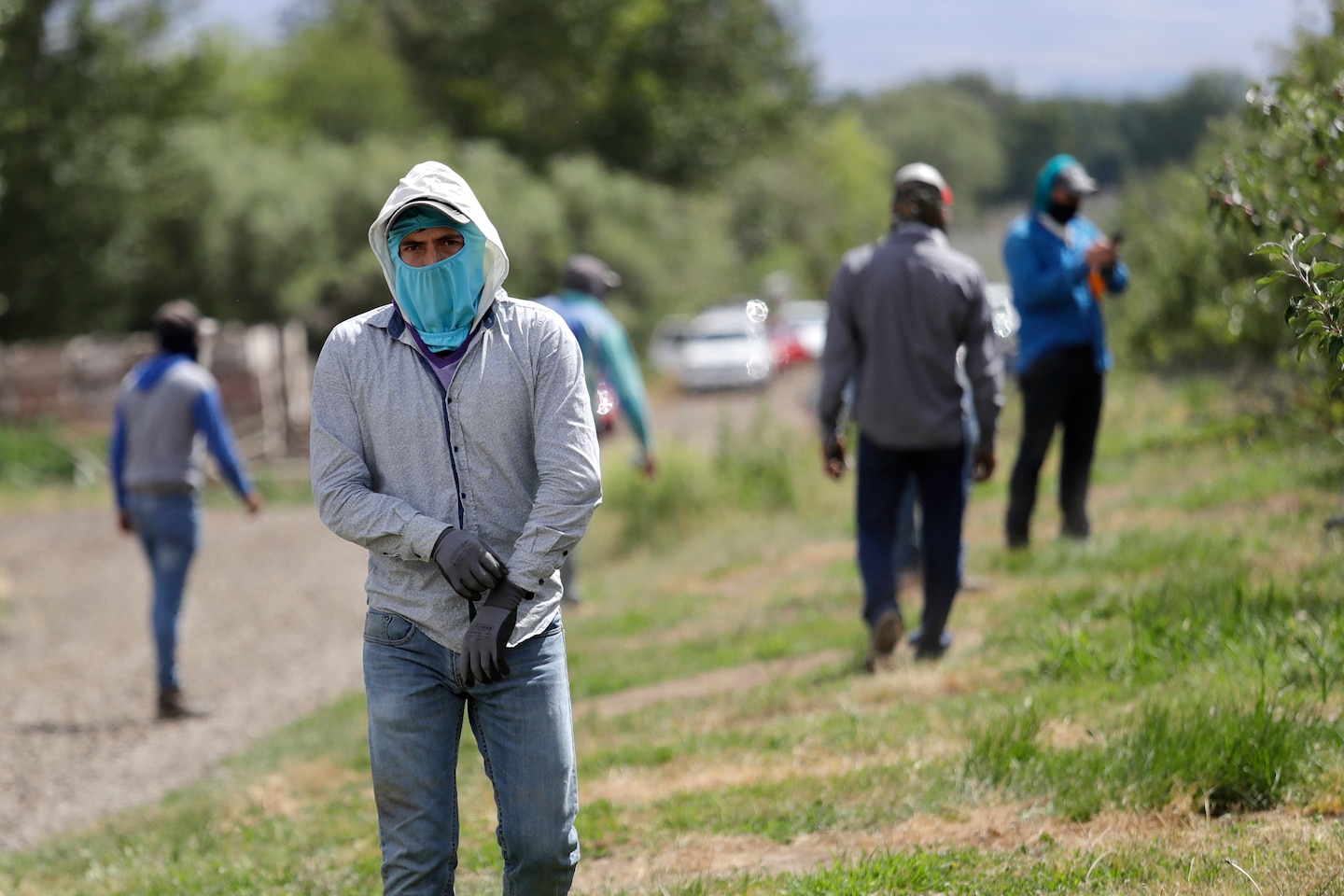 Gilbert hesitated. “In my 15-year career I’ve never received calls like that,” he said. “It was the second one this week.” But then he decided he couldn’t let the opportunity pass.

For Gilbert, a fifth-generation tree farmer, this has been a season of loss and compromise as a raging coronavirus outbreak threatens his workers and his bottom line.

The confluence of factors underscores how difficult it has become for farmers like Gilbert to keep workers healthy and contain the outbreaks that have ravaged other parts of America’s food system, especially meatpacking plants.

Masking is now mandatory throughout Yakima’s orchards and packing houses. Workers — in seven other warehouses — went on strike this spring over safety demands. Gilbert’s workers stayed on the job, but he raised the hourly wage by a dollar to ease tensions.

For months, Gilbert has scrambled to translate state, federal and World Health Organization guidelines to the thrum of his 4,000-acre farm and now he has stockpiled a most unlikely but necessary farm implement: 16,000 face masks.

While urban areas like Seattle have coronavirus largely under control, the virus is raging in Yakima County, home to a $10 billion agricultural industry.

“Our current game is not in the winning column, and all of us have to figure out a way to up our commitment to this effort,” Gov. Jay Inslee (D) said last month, during a visit to the region. “Every week [the Institute for Disease Modeling] shows us what the curve is going to look like if something doesn’t change. For the Yakima Valley it is terrifying, because that curve goes up just as dramatically as it was in March.”

By Tuesday, Yakima County reported nearly 7,700 known coronavirus infections, which is a rate of more than 3,000 per 100,000 residents, according to The Washington Post’s reporting. That figure is second-highest on the West Coast, topped only by California’s Imperial County, another fruit and vegetable stronghold.

Yakima now accounts for more than 20 percent of all cases in Washington, even though it’s to only 3.2 percent of the state’s population. Infections are rising in other eastern parts of the state as well.

In mid-June, the hospital’s intensive care unit was already at capacity and sending overflow patients to Seattle hospitals, two hours away. Transferring patients increases the risk of coronavirus exposure for the health-care workers who transport them and for the workers and patients at the receiving hospitals.

The coronavirus — and efforts to contain it — dominate every aspect of Gilbert’s business, from transporting pickers to work in the morning to the prices he can command when he gets his product to market.

“It is a human endeavor year-round,” said Washington State University Tree Fruit Extension Specialist Karen Lewis. “Specialty-crop-dependent operations, industries and communities around the world are being challenged to keep people physically distanced and protected. There are many towns in the U.S. that have the same conditions that Yakima has and we need to identify best practices for these unique communities.”

At its peak, Gilbert Orchards employs 600 year-round and 600 seasonal workers to harvest apples, cherries, peaches, apricots, pears and wine grapes, then package them at a fruit packing warehouse off-site for shipment across the United States and abroad. Gilbert did not say how many workers are at the orchard now.

The work involves two groups of workers: seasonal workers from Mexico who spread out among the orchards but live together in close quarters, and year-round employees who work inside fruit-packing warehouses.

The packing workers got sick first. In April, 26 workers at Gilbert’s fruit -warehouse were infected, forcing the facility to close temporarily for cleaning.

“They gave us essential worker papers but they didn’t give us masks, and no one was respecting the six-foot distance,” said Stefanie Velazquez, 21, who served on the strike committee of another packing plant, not Gilbert’s. Her mother, also a fruit packer, had coronavirus symptoms and was quarantined, although neither Velasquez nor her two siblings caught the virus.

But growers, physicians, public health officials and everyday residents also attribute the spread of the virus to lax community attitudes toward masking as well as large gatherings, despite strict curbs on gathering under the county’s reopening plan.

The most recent cases involve mainly Latino male agricultural workers between ages 20 to 60 who were admitted to the hospital because of difficulty breathing, said Tanny Davenport, physician executive at Virginia Mason Memorial, the county’s main hospital. “It’s disproportionately affecting Latinos in our community.”

For Gilbert, keeping workers safe required big investments in protective equipment such as masks and barriers — “We bought Yakima out of plexiglass,” he said — as well as introducing other safety measures that add cost and slow down production.

His biggest fear? Having to shut down and quarantine workers at the height of harvest could be ruinous.

And so Gilbert and his workers follow the new protocols. Under government regulations, growers are required to provide housing at no cost to workers. The new regulations ban bunk beds and limit each sleeping quarter to two single beds per room. Buildings that once housed up to 50 people are limited to 24.

In the morning, seasonal workers now come in with only six per 15-passenger van, which doubles the transport costs. A safety manager registers each worker’s temperature on arrival, before they don disposable masks and spread out to thin the apple trees.

When it’s lunch time, the workers sit at tables with plexiglass dividers. When break is over, managers make sure workers wash their hands at makeshift stations built from plastic buckets and PVC pipes.

Plexiglass dividers are also installed on the fruit-packing line.

Gilbert estimates the retrofits have increased the cost of producing a box of apples by 20 percent. He said he hopes to reclaim some of those additional expenses for protective equipment with a loan from the federal government’s Paycheck Protection Program for small businesses. His orchard is listed as receiving between $5 million and 10 million, according to data released this week.

And he is still coping with tariffs that spun out of President Trump’s trade war. Gilbert applied for relief from the U.S. Agriculture Department’s food assistance program, which is aimed at growers facing declines in commodity prices. After initially excluding apples, the federal agency changed course in late June following weeks of lobbying from the apple industry.

But he still anticipates a struggle getting his fruit to market. The state typically exports 30 percent of its cherries — but that fell to 17 percent in the first month of the season, with the coronavirus scrambling global shipping.

Apple exports are also down. Washington state exports 34 percent of its apples, according to the Washington Apple Commission. But those are projected to be off 18 percent this year, compared to the 2017-2018 season.

Back at the orchard, Gilbert is keeping his fingers crossed as summer wears on, and cherries give way to apples.

“The apples are just around the corner next month and so far look fantastic,” he said.

Armand Emamdjomeh contributed to this report.

The debt-ceiling debate is out of control. Here’s how to stop the madness.

Here’s why your food prices keep going up

A private equity-backed company got federal approval to store nuclear waste in Texas. The state is fighting back.