An assisted-living facility isn’t allowing visitors. This woman became a dishwasher there to see her husband. 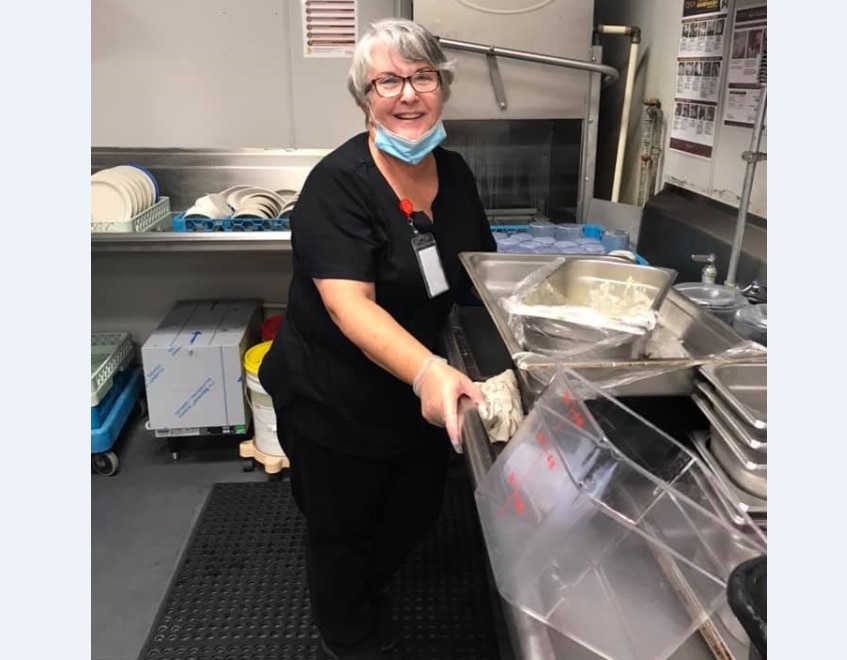 After not seeing her husband for more than three months, being with him again has been “just amazing,” she said through tears.

“It didn’t matter what I had to do to get there,” said Daniel. “I was willing to do whatever it took to fulfill my promise that I was going to be there for him every step of the way.”

Before the coronavirus pandemic, she used to visit him each evening without fail to spend time together and get him ready for bed. They would lie together for a couple of hours, she said, until he fell asleep.

Despite her busy job as chief executive and founder of ClaimMedic, it had become an important ritual for both of them since last summer, when she moved him into a memory care unit there.

March 10 was the last evening Daniel was able to see her husband. The coronavirus was rapidly gaining in the United States, and visitors were no longer permitted at the facility.

“I got a call on the 11th, and they told me I couldn’t come back,” recalled Daniel, who said she was devastated after a state order barred visitors from nursing homes and assisted-living facilities. “I didn’t even get to say goodbye.”

At first, Daniel was hopeful that the pandemic would be short-lived and that she would soon be able to reunite with her husband.

“But the days just kept ticking away,” said Daniel. “I reached out to the governor, talked to local reporters and called the parent company of the facility asking if there was anything I could do to get inside. I even offered to bring my puppy as a therapy dog.”

Her pleas were denied. With options dwindling, she visited her husband at his window, but that proved more painful than beneficial for him, she said.

“I did that twice and he just cried,” said Daniel. “I decided not to do that anymore, since he’s better when he’s not crying at the window. That wasn’t doing him any good.”

The pandemic was a wrench thrown in a situation that was otherwise working well. It can be an agonizing decision to figure out when or if to put a loved one into a memory facility. But Daniel said she knew it was time for her husband last summer.

“He was always in the house and would sit in front of the television all day,” she said. “I decided to put him in a memory center for the social aspect of it.”

Steve, who was a salesman, loved being around people, his wife said. Even after he got sick, socializing remained a critical contributor to his happiness.

“Everybody knew Steve at the center, and it was really the perfect scenario for him,” she said. “He was thriving there.”

But she wasn’t willing to give up on seeing him, especially because she knew she was not alone. Countless other families across the country were also unable to visit loved ones in assisted-living centers and nursing homes.

Daniel started to mobilize, not just for her own cause, but for the multitude of Americans who were facing the same battle she was. She started a Facebook group, “Caregivers for Compromise — because isolation kills too!” It was quickly flooded with thousands of harrowing separation stories and details of the painful ramifications of restricted visitations.

James Harvey, a spokesman for RoseCastle Management, the parent company that owns the facility, said of Daniel at the start of her advocacy campaign: “We started to partner with her in a more meaningful way to look at how we could meet her needs.”

Others at RoseCastle Management learned about Daniel’s plight, too.

“I heard about the work she was doing to bring awareness to her needs and the needs of others facing the same issues,” said Mary Raddant, the chief human resources officer at RoseCastle Management.

That’s when she thought of a creative idea.

“I knew we had some part-time roles available, so we called Mary and asked if she would be willing to come and work with us. Once she completed her shift, she could spend time with her husband,” said Raddant.

“We took her through the interview process just as we would any other applicant,” said Raddant.

“I had to do a drug test, a background screening, video training and a covid-19 test,” said Daniel, who added that an additional requirement is a weekly coronavirus test.

On July 3, after Daniel completed her job training, she walked into her husband’s room — 114 days after they had last seen each other.

“I opened the door and Steve just looked at me, wide-eyed,” said Daniel. “Then he said my name.”

The tears started streaming for both of them and “we hugged for the longest time,” she said.

Now, twice a week, Daniel puts in the time and elbow grease at RoseCastle, scrubbing, washing and mopping.

“Then I go visit Steve,” she said, adding that her husband doesn’t know about the workaround that allows her to see him. “I change him into his shorts and we lie in bed for a few hours until he falls asleep, just like we used to.”

The facility is happy to have her.

“Mary has been a part of our Deerwood family since her husband, Steve, moved into our community, but we are proud to welcome her onto our team,” said Kelley Withrow, executive director for RoseCastle at Deerwood. “Mary is off to a great start in her new role, and we are excited to see the positive changes in Steve’s demeanor as well.”

Florida Gov. Ron DeSantis (R) recently extended the rule restricting visitor access for another 60 days, so Daniel said she feels fortunate for her part-time job, though she is still advocating for others yearning to see their loved ones.

Alongside a team of advocates, “we are looking into what every state is doing and compiling a position paper with suggestions for how Florida can address the issue safely,” said Daniel, adding that she is recommending outdoor visitations and other options.

“We welcome anyone who has a sincere desire to provide care,” said Raddant. “If people have the capability and desire to work with the elderly and they want to apply at any community we manage, we welcome them as an applicant.”

Though the situation is far from perfect, Daniel said, she is thrilled to be reunited with her husband, and the feeling is mutual.

“Steve doesn’t speak very well,” said Daniel. “But I know he feels my love for him when I’m there.”