Washington’s name change happened fast, but it was decades in the making 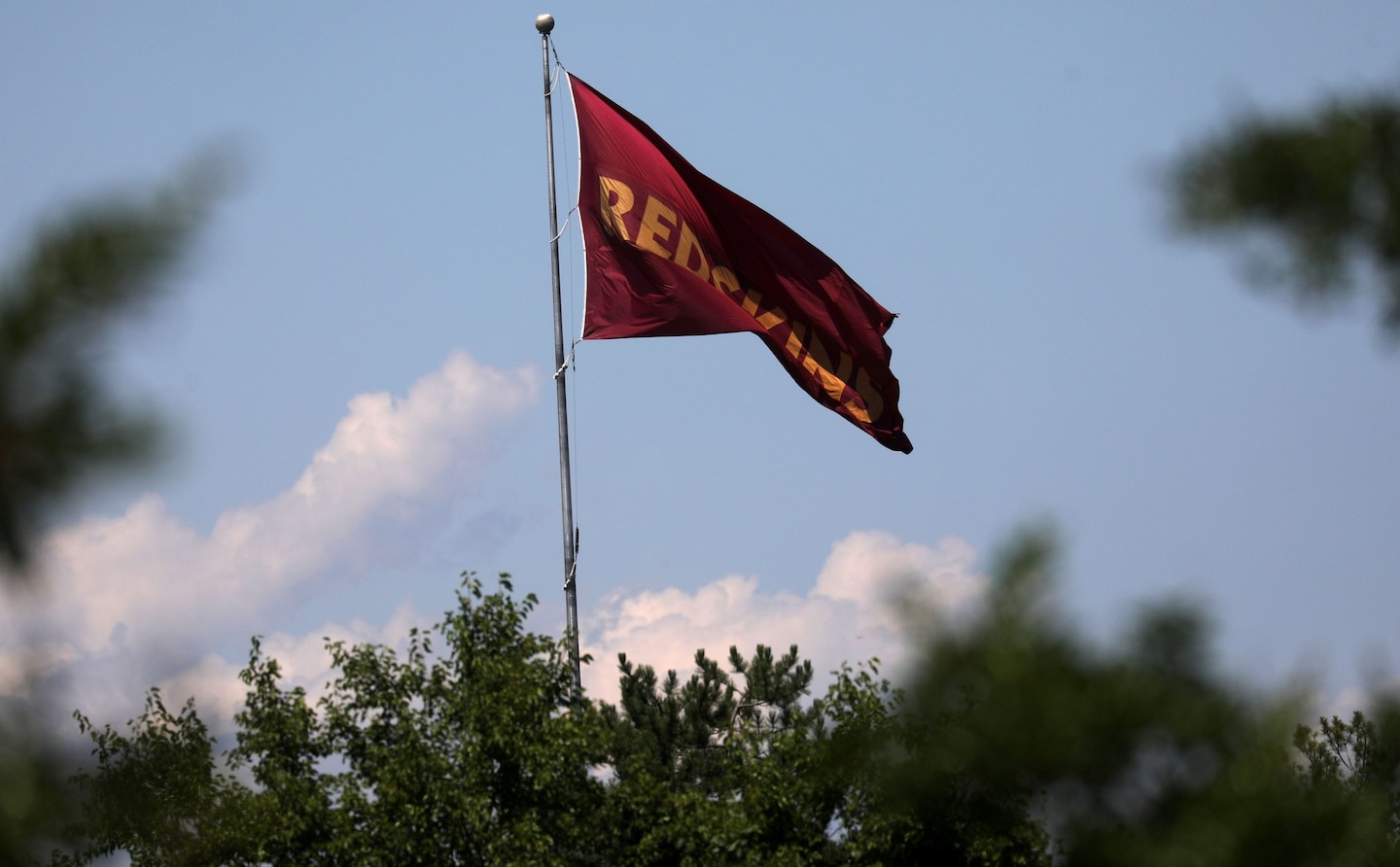 Staring at a stack of note cards, emcee Richard Ryan told Snyder many questions concerned the team’s name. Did he have any thoughts about changing it, and did he find it derogatory toward Native Americans?

“Number one, we’re never going to change the name of the Washington Redskins,” Snyder said, smiling at the light applause that followed. “From a bottom-line perspective, what it means is tradition. What it means is competitiveness. What it means is honor. It is not meant derogatory.”

Never has arrived. Snyder announced Monday that his franchise will “retire” the name. He said a new name will be decided after completion of the team’s internal review.

The name has lingered over Snyder’s franchise for the entirety of his stewardship and decades before, at some moments a latent topic and at others a hotly debated issue, always present.

The name lasted 87 years. It saw a move from Boston to Washington, three Super Bowl titles, the creation of a unifying Washington institution and, in recent years, the deterioration of a flagship North American sports franchise. It saw former owner George Preston Marshall’s racism and Hall of Fame coach Joe Gibbs’s understated brilliance. It saw Sonny Jurgensen’s gunslinging, John Riggins’s power and Art Monk’s grace. It saw seats shake at RFK Stadium and sections removed at FedEx Field. It saw two World Wars and 15 United States presidents. It made people proud, ashamed, comforted and enraged. And now it is gone.

In the span of six weeks, nationwide racial reckoning and widespread protests spurred major corporate sponsors of the team to publicly pressure Snyder to change the name, which many consider to be offensive and a slur to Native Americans.

While the discussion intensified in recent years, it was not a new debate. The desire among advocates to change the name had bubbled for nearly five decades, a majority of the name’s life span.

In 1933, when the franchise was based in Boston, Marshall changed the name from Braves to Redskins to avoid confusion with baseball’s Boston Braves. “The fact that we have in our head coach Lone Star Dietz, an Indian, together with several Indian players, has not, as may be suspected, inspired me to select the name Redskins,” Marshall said.

Marshall moved the franchise to Washington for the 1937 season because of flagging attendance in Boston. Over the years that followed, he resisted integrating Washington’s roster longer than any other National Football League owner. He finally surrendered in 1962 only under pressure from the Kennedy administration, which otherwise threatened to prevent the team from playing in newly built District of Columbia Stadium, which was renamed Robert F. Kennedy Memorial Stadium in 1969 to honor the slain U.S. senator.

The National Congress of American Indians formed in 1944, and its mission included the elimination of negative stereotypes. But the idea that Native American iconography in sports mascots could be dehumanizing remained largely absent from public consciousness until 1970.

That year, Native American students at Stanford University submitted a letter to the dean of students objecting to the name Indians and the school’s mascot, Prince Lightfoot, whose dancing performances they found mocking. They said changing the mascot would be “renouncing a grotesque ignorance that it has previously condoned,” according to a history on Stanford’s website.

By 1972, Stanford’s president changed the name of its sports teams from Indians to Cardinals (later Cardinal), a decision that set off a years-long cascade of collegiate mascot and name changes. In 1997, Miami University in Ohio became the final Division I team to use “Redskins,” changing its name to the RedHawks.

“This is getting silly,” Williams said, according to the Washington Evening Star. “Suppose blacks get together and demanded Cleveland’s football team stopped calling itself the Browns, or ornithologists insisted that Baltimore was demeaning to birds because the name is the Orioles.”

Two months later, 11 Native American leaders representing several organizations traveled to Washington and met Williams at his Williams & Connolly law office. They called the name a “derogatory racial epithet” and asked Williams to change it. Williams called the meeting “a listening session” for him, insisting it was not a negotiation.

In the meeting, according to the Washington Daily News, Williams told the group changing the name would require “thousands of dollars” paid to NFL Properties and NFL Films.

“You’ve made money off this Indian stereotype for years,” Seneca Indian Laura Wittstock said. “And we refuse to accept this kind of argument now. Any corporation that finds something wrong with its public relations or public image does not hesitate to change.”

“We left Williams with a pure moral issue,” Ron Aguilar, head of the National Youth Indian Council, said at the time. “We know we are right and that we will win.”

Months later, Williams made a minor concession: While pledging to keep the name with an “open mind,” he changed lyrics in the team’s fight song that referenced scalping.

That autumn, Washington debuted its new logo, a profile of a Native American that it wore on its helmets through 2019. It was designed by Walter Wetzel, former chairman of the Blackfeet Nation. “It made us all so proud to have an Indian on a big-time team,” Wetzel told The Washington Post in 2002, adding that “only radicals” wanted the name changed.

As would often happen, the name debate receded from public discussion, only to resurface.

After dominating the NFL through the 1991 regular season, Washington arrived for the Super Bowl in Minneapolis in January 1992. Before Washington’s victory over the Buffalo Bills, roughly 2,000 protesters gathered outside the Metrodome and called on owner Jack Kent Cooke to change the name.

“We say to Jack Kent Cooke, this is 1992,” Vernon Bellecourt, the director of the American Indian Movement, said. “The name of your football team has got to be changed.”

The debate intensified throughout the year. In September, Suzan Shown Harjo and six other Native Americans filed a petition to cancel Washington’s trademark registrations with the U.S. Patent and Trademark Office on the grounds they were disparaging. Harjo would win a temporary victory in 1999 when the office ordered the cancellation of seven trademarks, including the name and helmet logo. A judge threw out that decision in 2003.

The team’s physical ties to the District sometimes grew contentious over the name, a fight that first surfaced in 1993. As Cooke looked for a site to build a new stadium, Sen. Ben Nighthorse Campbell (D-Colo.) introduced a bill to block the team from using federal land unless it changed its name. RFK Stadium sits on land maintained by the National Park Service. By the end of the decade, Cooke had moved the team from the District to a new stadium in Landover, Md.

Groups continued to revive legal challenges. Amanda Blackhorse, a Navajo, filed a new petition with the Trademark Trial and Appeal Board. Her challenge was still winding through courts in May 2013, one of the forces that kept the name in the news when Snyder agreed to a rare interview with USA Today.

The NFL had informed Snyder it preferred that he not address the name controversy, believing it best not to inflame the situation. But when asked, Snyder offered perhaps the most famous declaration in the history of the name debate. He doubled down on the comments he had made at the National Press Club 12 years earlier.

“We’ll never change the name,” Snyder said. “It’s that simple. NEVER — you can use caps.”

The comment further ratcheted up efforts to change the name. The Oneida Indian Nation, led by Halbritter, had started the Change the Mascot initiative, which took aim at Washington with a goal of promoting discussion. President Barack Obama weighed in in the fall of 2013, saying if a team name risked offending large groups of people, “I would think about changing it.”

The Washington Post editorial board announced in 2014 that it would cease usage of “Redskins” on its pages. Mike Carey, one of the NFL’s top referees before his retirement, revealed he had asked not to work Washington’s games starting in 2006. While some media commentators held firm — former Chicago Bears coach Mike Ditka, then an ESPN analyst, called the debate “stupid” — a growing number stopped using the team’s name, as did a number of newspapers around the country.

A 2016 Washington Post poll, which many critics disparaged as unsound, found 9 of 10 Native Americans were not offended by the name. The results emboldened Snyder and his supporters. They notched another win in 2017, when Blackhorse lost her final trademark appeal. The status quo remained unchanged for a few years: Snyder dug in, the league office hoped the issue stayed dormant, advocates on both sides talked past one another.

And then came this spring. The killing of George Floyd in May while in Minneapolis police custody sparked an avalanche of protests regarding police brutality and racial injustice. While those demonstrations focused on anti-black racism, the reexamination of other forms of racism piggybacked them.

“If we look at the history of this country, dealing with racism as it pertains to black people often expands to encompass many others as well,” Todd Boyd, the University of Southern California’s chair for the study of race and popular culture, said in a June interview. “To talk about racism in sports and it be focused on black issues means that it shines a light on other issues involving race, racism, etc. The conversation about the Native American mascots is one that’s been going on a long time. I think it gets harder to defend that.”

Change happens slowly, then all at once. Corporate America saw the masses in the streets and concluded that ignoring them would be bad business. Snyder and newly hired coach Ron Rivera began discussing the state of the name in June, Rivera said in a July 4 interview, around the time politicians, tribal leaders and other advocates started a new push to change it. On June 12, D.C. Mayor Muriel E. Bowser (D) said it was “past time” to change the name.

Financial pressure finally broke Snyder. On July 2, FedEx sent Washington’s general counsel a two-page letter saying it would remove its signage from the team’s stadium after the 2020 season, citing the risk of damage to the company’s brand, if the name wasn’t changed. That move would have cost Snyder approximately $45 million — the remaining six years’ balance on the $205 million stadium naming rights deal.

Later that day, the company — whose CEO, Frederick W. Smith, is a minority owner of the team — announced publicly in a one-sentence release that it had requested Washington change its name. Nike stopped listing the word “Redskins” in its online store; customers who searched for gear under that name found an empty screen.

On the morning of July 3, Washington announced it would undergo a “thorough review” of its name. Corporate backers PepsiCo, Bank of America and Bud Light, as well as NFL Commissioner Roger Goodell, all released statements commending the decision. In days, the unthinkable had become inevitable.

Having resisted for two decades, Snyder changed course in a matter of weeks.

Roman Stubbs contributed to this report.