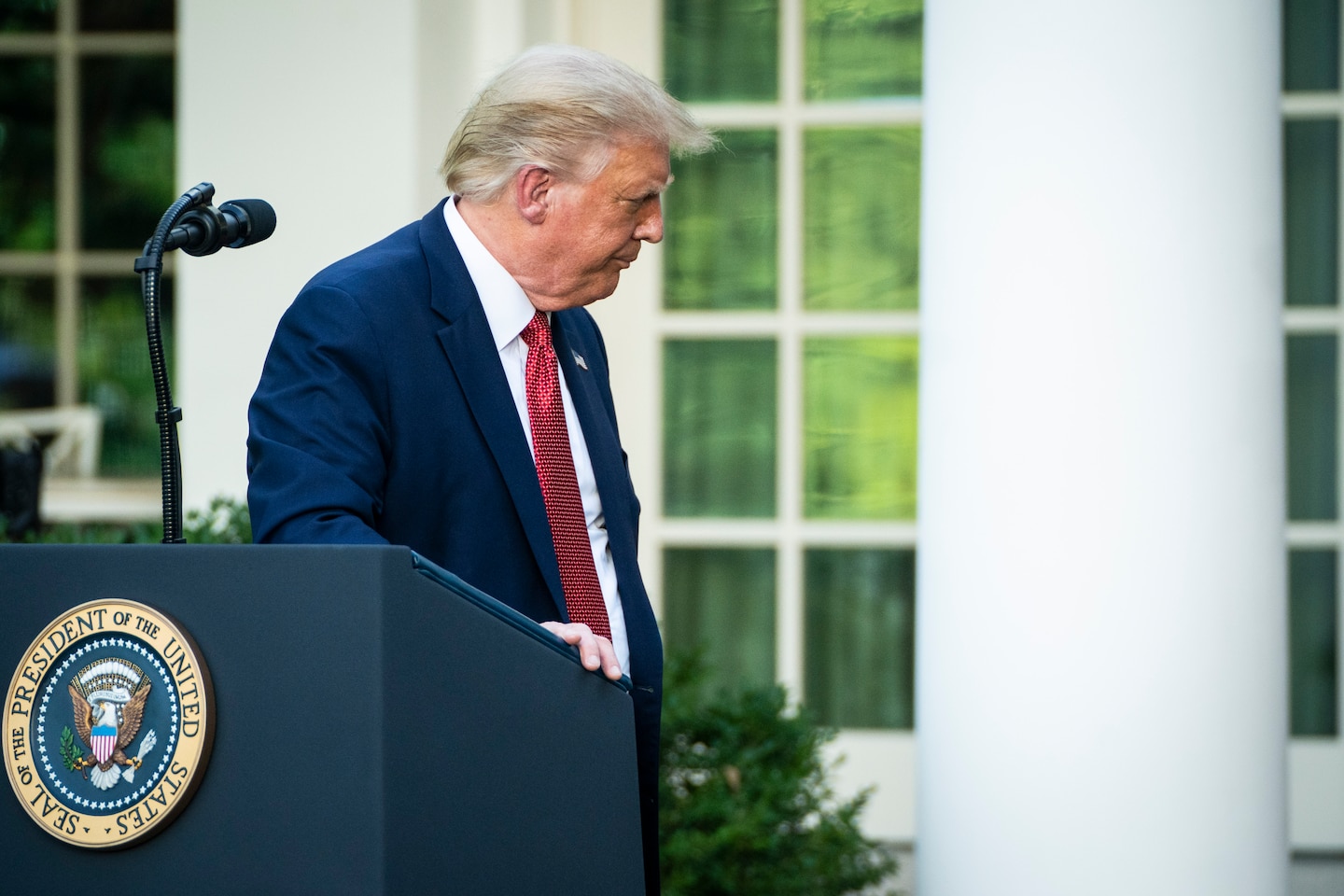 Biden’s party is even “calling for defunding of our military,” Trump alleged.

“I’m not making this up!” Trump said, mid-jeremiad. (Actually, he was.)

He alleged that Democratic mayors possibly “wouldn’t mind” if terrorists “blow up our cities.”

“We could go on for days,” he said after 40 minutes. Indeed, the only limitation was Trump’s, and his staff’s, imaginations.

Previous incumbents have used the “Rose Garden strategy” — that is, using the trappings of the presidency to campaign for reelection — but Trump’s reinterpretation of that approach was downright bizarre. After his attempt at a comeback rally in Tulsa turned into a disaster, and he canceled his New Hampshire rally because of a rainstorm on a perfectly dry evening, Trump seems to have decided to hold campaign rallies in the Rose Garden, with the White House press corps as captive audience.

In the same week Trump reached the milestone of 20,000 false or misleading statements, as documented by The Post’s Fact Checker, the president seemed determined to recite them all in a single appearance. To call it stream-of-consciousness is too serene: Trump’s brain was shooting the rapids, hitting rocks, tumbling down falls.

He started with an announcement about Hong Kong; bounced to Biden’s infrastructure plan; swerved to the pandemic; careened to the swine flu of 2009; lurched to Ukraine and Burisma (“Where is Hunter?”); wobbled into the stock market; detoured to “AOC” (“a young woman not talented in many ways”), “Bernie” and Nancy Pelosi; floated into Maine fisheries; listed into the “tremendous fraud” of mail-in voting (“a mailman was indicted someplace”); and took on water with a claim about “criminals pouring into our country” — from Europe.

Every now and again, his thoughts would return to the paper in front of him, and he would read some other fantastic allegation against Biden, so absurd it seemed to surprise even Trump. “Oh, I didn’t notice that,” he said, reading an allegation that Biden has plans to rejoin the Paris climate agreement but make it “worse than it was.”

“We did this very quickly,” Trump explained at one point as he read through the imaginary Biden agenda.

Who would have guessed?

Trump’s instability seemed to have been set off by Biden himself, who earlier Tuesday did the very opposite of what Trump did: He delivered a reasoned and measured speech about his infrastructure plans, hewing closely to the teleprompter and taking no questions, and eschewing liberal favorites from the Green New Deal. “Look, these aren’t pie-in-the-sky dreams,” Biden said. “These are actionable policies.”

Confronted with an opponent who is conspicuously reasonable, Trump has pretended he is running against somebody else. He has tried to brand Biden as senile and corrupt, and his allies have tried to brand the presumptive Democratic nominee a sexual predator and a pedophile.

“Joe Biden’s entire career has been a gift to the Chinese Communist Party,” Trump alleged.

Biden “never did anything but make very bad decisions.”

“Biden is pushing a platform that would demolish the U.S. economy.”

“He wants to kill American energy!”

He has “the most extreme platform of any major party nominee by far in American history.”

Maybe some in the MAGA crowd will believe that. They’ll also believe that “thousands of people in New York died because of poor management” by Gov. Andrew Cuomo (D) and that Trump’s decision to stop flights from China saved “2 to 3 million lives” (“a number that we’re actually working on”).

Asked whether his extraordinary Rose Garden tirade was a sign that he thinks he might lose, Trump’s answer included references to his electoral college win in 2016 and the fact that “we’re making swabs [in] a beautiful big new factory.”

Beautiful, that is, until Biden takes away all its windows.