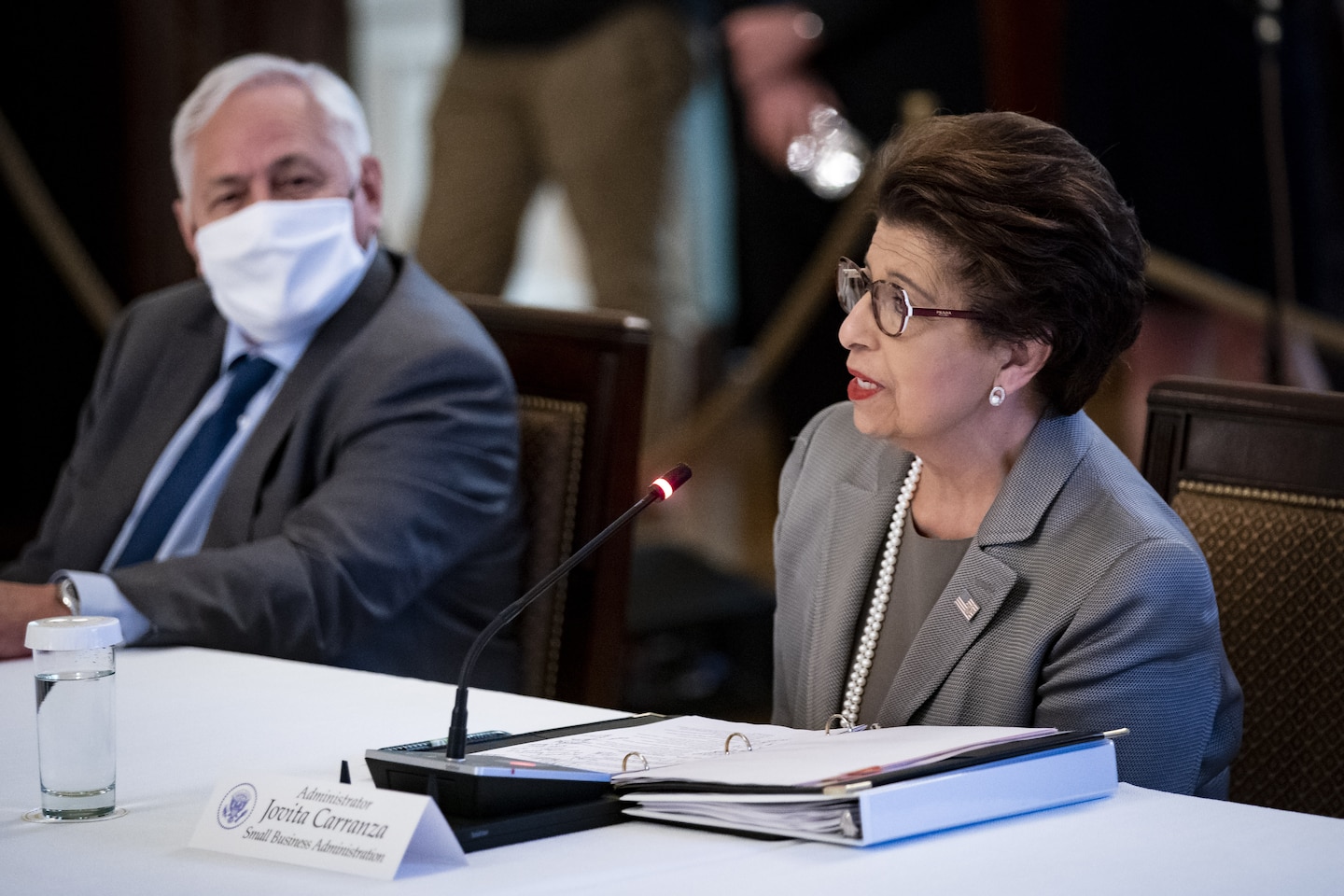 The Small Business Administration in recent weeks has been inundated with calls from people claiming to run odd businesses in odd places, all attracted by the prospect of a quick $10,000 advance on a government loan, according to a person with direct knowledge of the program who asked not to be identified discussing confidential matters.

Suspicious requests from Chicago have grown so numerous that SBA managers recently alerted their front-line staff to be on the lookout for Windy City paperwork. A recent advisory also asked staffers to report applications containing one of several additional red flags, including those with just enough employees to qualify for the maximum $10,000 payment. Callers to the SBA’s application hotline who struggle to answer basic questions about their business or who are laser-focused on obtaining the advance rather than discussing loan terms were also earmarked for extra scrutiny.

“It’s a feeding frenzy,” said the person with knowledge of the program. “A lot of these are going through with little or no due diligence.”

At issue is the SBA’s Economic Injury Disaster Loan (EIDL), a long-standing government program that Congress expanded in response to the novel coronavirus pandemic. With a spotty track record even in routine operations, the program appears to have been overwhelmed by the sheer magnitude of the economic catastrophe unleashed by the medical emergency.

“It was treated as an orphan initially,” said Sen. Ben Cardin (Md.), ranking Democrat on the Senate Small Business and Entrepreneurship Committee. “They clearly were not ready for this type of responsibility and they did not gear up for it.”

EIDL provides long-term loans for businesses damaged during hurricanes, tornadoes and other natural disasters. A separate effort — the Paycheck Protection Program — offers short-term funding designed to prevent the pandemic from triggering a rash of small-business layoffs.

When Congress in March approved the $2 trillion Cares Act, the principal legislative response to the pandemic, lawmakers directed the agency to also issue advances to applicants while their disaster loan requests were being reviewed.

Those grants — of $1,000 per employee up to a $10,000 maximum — are intended to support businesses until their loans are approved. Notably, they do not need to be repaid even if no loan is ultimately approved.

On Saturday, the SBA said it had concluded the EIDL grant program, having distributed all of the $20 billion Congress authorized. Nearly 6 million small businesses, employing 30.5 million workers, benefited, the agency said.

A spokesman for the SBA referred fraud questions to the agency’s office of the inspector general (OIG), which declined to say whether it is investigating complaints about inadequate financial controls.

“OIG has active investigations involving the loan programs authorized by the Cares Act, to include the EIDL program,” Sheldon Shoemaker, the SBA’s assistant inspector general for management and operations, said via email. “As indicated in recent press releases, there have been a variety of fraud schemes employed. At this time, we cannot discuss the specifics of ongoing investigative activity.”

But this spring — as the SBA was frantically adding staff to cope with an avalanche of loan requests — the inspector general warned that the disaster program would likely experience an “increased vulnerability to fraud and unnecessary losses.”

In an April 3 white paper, the inspector general wrote that the SBA “must reevaluate the current effectiveness of its internal controls” to avoid missteps that had plagued it repeatedly in recent years.

The report cited failures in the aftermath of Hurricane Sandy in 2012, such as staffing shortfalls and wrongheaded decisions, which may be recurring. The agency “approved loans without verifying borrower’s eligibility, or approved loans to borrowers who lack creditworthiness or repayment ability,” according to the in-house watchdog.

In its rush to respond to the costly storm, the agency issued loans to “businesses that did not suffer an economic loss,” the inspector general found.

The warnings have proved prescient.

In May, federal prosecutors in Manhattan arrested and charged Muge Ma, a Chinese national, with bank fraud, wire fraud and making a false statement in connection with fraudulently seeking $20 million worth of SBA paycheck protection and disaster loans.

Before uncovering the scheme, the agency sent a $10,000 advance to one of Ma’s companies and approved a $500,000 EIDL loan for a second, according to court filings in the Southern District of New York. Ma had claimed in his loan applications to employ hundreds of workers in the two businesses, though in fact he was the sole employee.

With the economy in free fall this spring, Congress pushed the SBA to disburse the disaster money more quickly to keep Main Street businesses alive. But the SBA has struggled to keep up with a flood of more than 9 million applications, nearly 100 times what it had received in previous years.

Businesses, meanwhile, have complained about receiving too little information on their applications. “Many received an advance and didn’t know what it was,” said Holly Wade, director of research and policy analysis for the National Federation of Independent Business. “It’s just been an ongoing frustration.”

The price of speed may be waste.

The applicants now raising concerns share common traits. Many list as their commercial address apartments, where they claim to operate 10-employee barbershops or to provide auto-repair services. Many change banks more than once in an effort to avoid financial institutions’ anti-fraud controls, according to the person familiar with the program.

On the Internet, YouTube videos have proliferated, touting the grant program as “free money.”

The expanded disaster loan and grant program had a rocky debut. Swamped from the start, it stopped accepting new applications in mid-April only to reopen on May 4, but only for agricultural businesses. On June 15, the SBA announced the program would resume accepting requests from all applicants.

Officials have defended their performance, saying the pandemic placed unprecedented burdens on an agency that usually operates well outside the spotlight. In three months, the SBA approved and disbursed twice as much disaster loan money to offset damage from the coronavirus as it had in its entire 67-year history, Rivera told the panel.

To meet surging demand, the SBA staffed up from 300 to 3,000 in its call centers and added extra 1,000 paralegals, Jovita Carranza, the agency’s head, told a Senate panel last month. Loan officers, who typically fielded no more than five calls a day, now juggle 50, she said.

After a slow start, the SBA accelerated its decision-making and has now approved 2.2 million loans with a total value of nearly $135 billion. Still, that’s little more than one-third of the amount that Congress has provided funding to support. Lawmakers also have complained that agency officials arbitrarily capped individual loan amounts well below the customary $2 million limit.

Agency officials say they were trying to stretch funds to cover as many companies as possible. Businesses could initially apply for 30-year loans of up to $2 million at an interest rate of 3.75 percent, but the loan amounts were later slashed to $150,000 when the agency was bombarded with requests.

On Friday, Carranza and Treasury Secretary Steven Mnuchin are scheduled to testify about the administration’s pandemic response before the House Small Business Committee.

Cardin, who has urged the SBA to move faster, said the agency should have sufficient safeguards to prevent scam artists from cashing in.

“I put the responsibility squarely on SBA. It’s certainly not pressure from Congress,” he said.