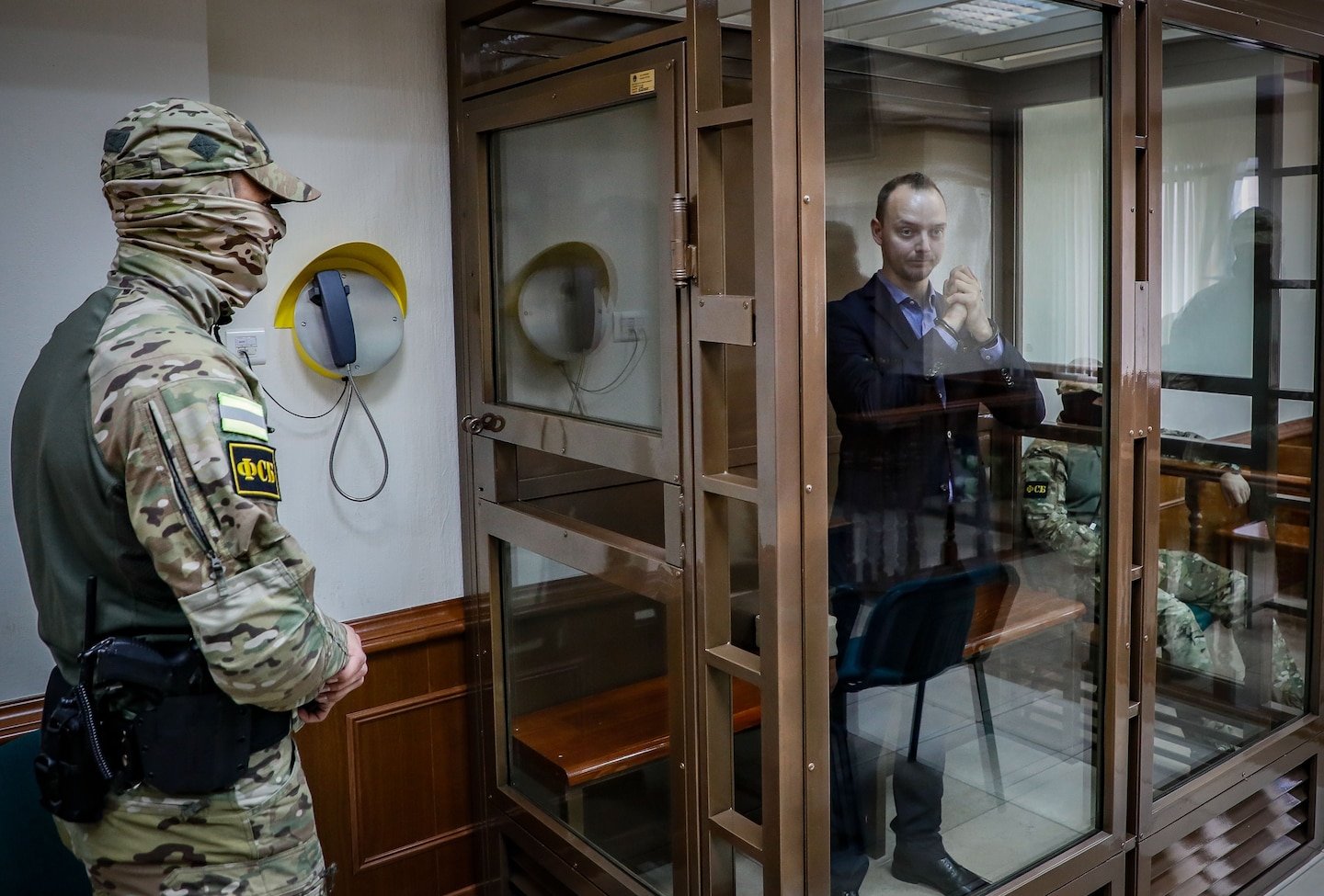 Since a nationwide vote, which wrapped up July 1, paved the way for President Vladimir Putin to potentially stay in power until 2036, several high-profile journalists, politicians and activists have been arrested or convicted. The actions are widely seen as a message from Putin’s powerful security agencies on the steep cost of dissent.

To Verzilov, also part of the performance art activist group Pussy Riot, those three weeks were disturbing, irritating, funny and terrifying, all at once.

In 2018, Verzilov survived what he believes to have been a poisoning attempt by security agencies. This time around, he claims, authorities were ordered to pin something — anything — on him. He faces trial in coming weeks on the obscure charge of failing to declare a foreign passport.

Putin spokesman Dmitry Peskov said the Kremlin has no influence over court cases. But the list of Putin critics seized in the latest crackdowns continues to grow.

Prominent journalist Ivan Safronov, a specialist in military issues who went to work for Russia’s space agency, was charged with treason July 7 for allegedly leaking secrets three years ago, an allegation he denies.

Yuri Dmitriyev, 64, a gulag historian from the rights group Memorial was convicted Wednesday on child-abuse charges — which he denied — and was sentenced to three years in a maximum-security prison. He was acquitted in 2018, before being charged again. (Memorial, labeled a foreign agent by authorities, has been repeatedly fined.)

Svetlana Prokopyeva, a journalist from Pskov in northwest Russia, was convicted July 6 of propaganda justifying terrorism, but denies wrongdoing and will appeal her conviction.

And former Khabarovsk governor Sergei Furgal, of the opposition Liberal Democratic Party, was arrested on murder charges dating back as far as 2004, triggering mass street protests in the leading city of the eastern Siberian region. He had rejected the charges.

“They don’t actually need to arrest or imprison a lot of people. They just need a high-profile case to send a chilling message,” said Rachel Denber of Human Rights Watch, referring to the Prokopyeva and Safronov cases. “These are very serious charges against veteran journalists, so I think that these cases suggest that we’re entering new territory.

“I think it’s pretty obvious that there’s a new mobilization of repression and pushback against society, against civil society and against nonconformists.”

After years of pressure from Russian authorities, there is little independent media left.

Journalists have been killed under mysterious circumstances and editors fired. Some outlets were shut down; others were taken over by Kremlin-friendly media. In May, Vedomosti, a liberal business newspaper, was bought by the owner of a regional news agency, Ivan Yeryomin. Editors and journalists resigned, citing censorship by the new editor in chief, Andrei Shmarov, named before the sale was finalized.

Verzilov, of Mediazona, believes someone in power wants to punish him for his role in founding the news group and for his actions as part of Pussy Riot — including invading the field during the 2018 World Cup soccer final in Moscow with three other members dressed as police. The stunt embarrassed Putin in front of French President Emmanuel Macron and other world leaders.

“That has been directed at Putin and his regime. We have been at the forefront of conflict with the Russian government,” he said. He predicts tougher times ahead for independent media, activists and opposition politicians.

“Definitely things are headed in that direction. We expect the problems to become harder, definitely, as society progresses to putting more pressure on Putin, because Putin has no desire to give up power voluntarily,” Verzilov said.

After police broke into his apartment June 21, he was interrogated until after 9 p.m. and freed, but shadowed by plainclothes police. He was jailed for 15 days for swearing at police, a charge he denies.

Before he was released, police handed him a paper signed by Gen. Rustam Gabdulin, one of Russia’s top investigators and the major general of justice, accusing him of failing to declare his Canadian passport. Canadian officials have declined to publicly comment on the case, citing privacy concerns.

“They spent the two weeks I was in prison of looking through my electronics and notebooks that were confiscated trying to think of what criminal case they could open, and all they would find was this quite pathetic and almost-never-used article in the Russian code of non-declaration of a foreign passport. It’s probably the first time in the world that a person has been prosecuted for his Canadian passport,” he said with a chuckle. The searches and interrogations only accelerated.

A month after Verzilov’s World Cup pitch invasion, he fell seriously ill, nearly died and was flown to Germany, where doctors said it was “highly plausible” he had been poisoned.

Unable to pack for prison

For those who dare to criticize authorities, the law is often arbitrary.

Days after the week-long voting on the constitutional changes, journalist Svetlana Prokopyeva was convicted of what Amnesty International calls “trumped-up charges” of justifying terrorism, was placed on a terrorist list and saw her bank accounts frozen. Her crime: She wrote about a 17-year-old boy who blew himself up outside the Federal Security Service headquarters in Arkhangelsk in northern Russia. By restricting avenues for protest, she argued, authorities left young people with few ways to express their views.

The night before her conviction, Prokopyeva, facing a possible six-year jail term demanded by prosecutors, was unable to pack her jail suitcase with the necessary rubber sandals and plastic dishes. Friends did it for her.

“It was very hard for me, and I tried not to show how hard it was, and everybody was amazed by my iron character and how strong I was,” she said. She avoided a jail sentence but was fined 500,000 rubles (about $7,000) and plans to appeal. She said the trauma of the case has left her shattered.

“I believe that my case opens the window for future opportunities to persecute journalists and charge them with anything,” she added.

Journalist Ivan Safronov is accused of passing secrets to Czech intelligence in 2017. His lawyer Ivan Pavlov said it was difficult to form a defense because the prosecution had not properly detailed the case.

“And if special services cannot find these enemies, they need to create them. There is a demand for this,” Pavlov said. He said Russian law on state secrets was ambiguous, making it unclear what information was classified and leaving journalists, scientists and scholars vulnerable.

Commenting on Safronov’s arrest, Putin spokesman Peskov told reporters that it was not linked to his journalism and that Russian counterintelligence “is very busy, has a lot of tasks and does its job very well.” Russia’s space agency has denied that the arrest was related to Safronov’s work there.

Prokopyeva believes that Russian authorities will not manage to completely muzzle the Internet and independent journalists.

“I know how mean and low their methods can be,” she said. “On the other hand, I know how important it is not to fall for self-censorship and not to let them narrow the limits to freedom of speech.”

Natalia Abbakumova contributed to this report.