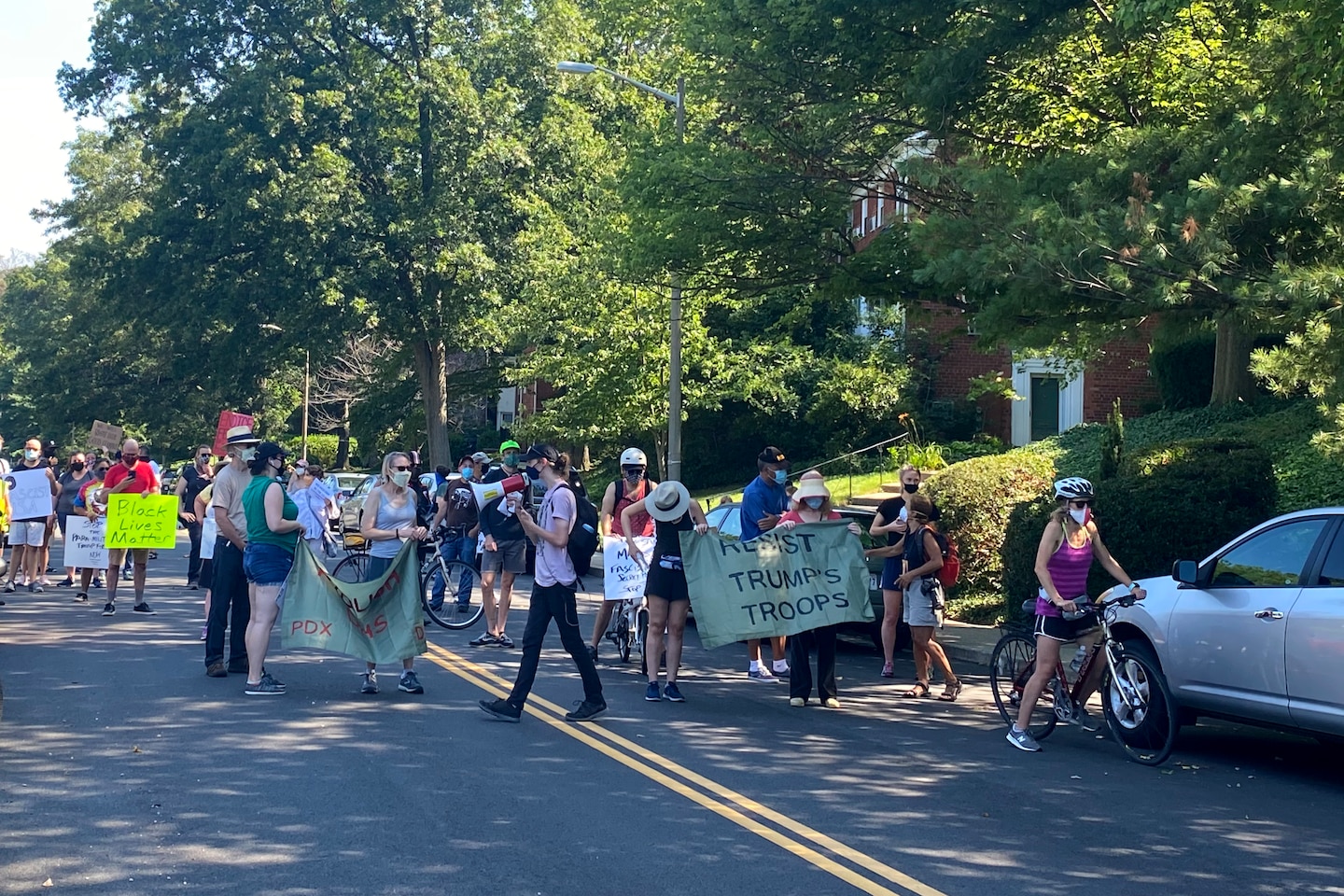 “A block and a half together, everyone,” Jeff Ordower, an organizer said, as he led the group up a street.

Together they went, in bicycle jerseys and tie-dyed shirts, chanting Black Lives Matter protest slogans as well as a specific message for their target. The group was mostly white people, young and old, walking uphill as the temperature climbed into the humid 90s. Some huffed and puffed behind face masks, which everyone wore to ward off the novel coronavirus.

A single Alexandria police patrol car escorted them. The commotion drew curious residents out of their homes. One woman on her front lawn held a Black Lives Matter sign as the group marched past — coffee cup in her other hand. Passing drivers honked horns in support.

Three law enforcement officers stood in the side yard of Wolf’s house, on a quiet street. Another sat in a blue SUV in the driveway. No one could be seen inside the house during the 90-minute protest.

The demonstrators stood in a circle, listening to a range of speakers decry DHS’s involvement in separating immigrant families, deporting longtime U.S. residents for immigration violations and for what many termed the “kidnapping” of Portland protesters during the recent demonstrations calling for racial justice.

“It was an escalation,” said Jonathan Krall, 60, a leader of Grassroots Alexandria, which he said has long opposed increasing unconstitutional enforcement actions of local and federal officers. “It’s worrisome because people might be afraid to protest, and I’m glad people have responded the opposite way.”

Rebecca Loesberg, Wolf’s neighbor, set out a folding table with snacks and water she said she had ordered from Costco on Instacart as soon as she learned of the demonstration.

“I think it’s an embarrassment and terrorism in this country at the hands of the government,” said Loesberg, 31, who described her relationship with Wolf as cordial but not close.

Loesberg’s husband offered water to Secret Service members, and one speaker sincerely thanked the Alexandria police for protection, which drew a Bronx cheer from the crowd.

“We are not an angry mob, are we?” shouted one speaker. “We are angry neighbors. And this man lives among us.”

Hours later, another group of neighbors showed up to Wolf’s home to let him know the sentiment was not universal. They lined his lawn with tiny American flags and planted handmade signs that said, “Thank you for your service” and “Thank you for protecting the United States of America, and thank you DHS.”