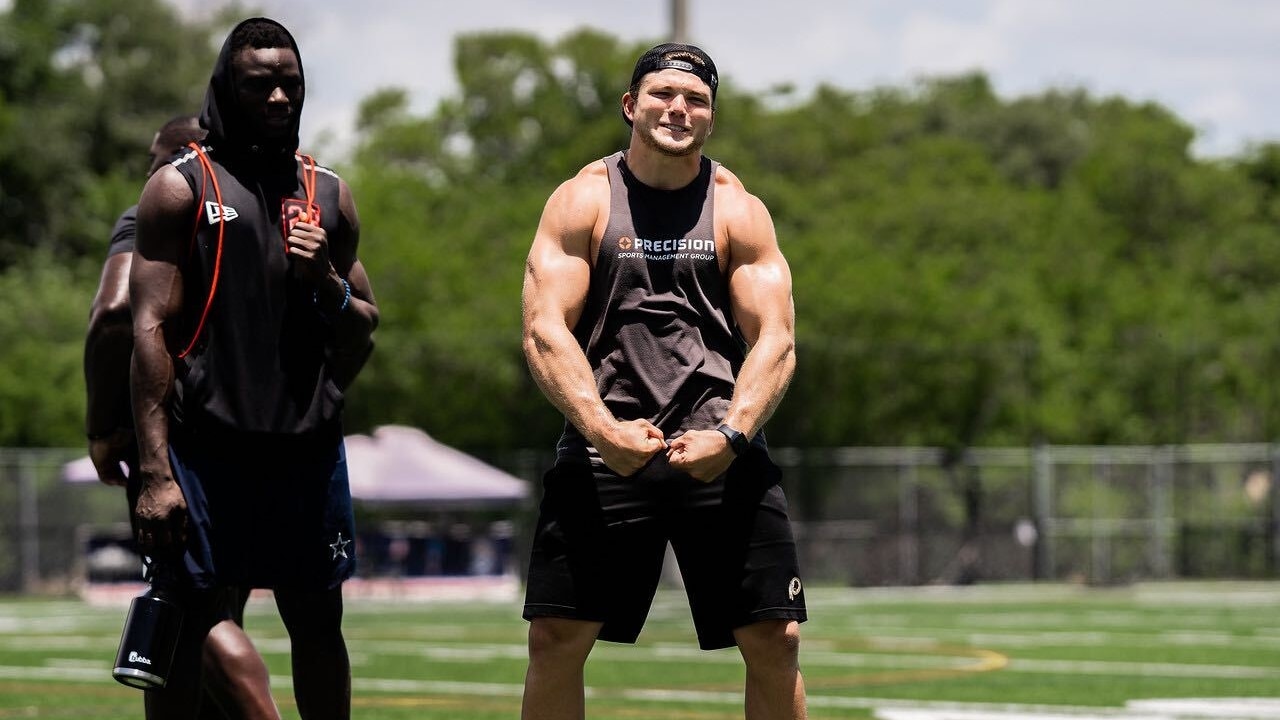 Now, with a new coaching staff and scheme, Holcomb is ready to build. During a 12½-hour road trip from his parents’ house in New Smyrna Beach, Fla. to Northern Virginia in late June, he spoke to The Washington Post about which linebacker spot he might play, what he wants to improve upon, why the new coaching staff has him fired up, and more.

This interview has been edited and condensed for clarity.

What are your road-trip essentials?

I got my half-gallon Yeti jug full of water; always gotta stay hydrated. Boatloads of snacks. [Joe Rogan and “Bussin’ with The Boys” podcasts.] The dog [Benji, an American bulldog and pit mix] is loaded up with the water bowl, and he’s got bones back there, so he can munch on some stuff. I’ll toss a tennis ball back there every two hours ‘cause he’ll chew through a tennis ball in like five minutes.

Considering everything, how was the offseason?

We did pretty fricking good with what we’ve got. We got a boatload accomplished in those Zooms. I was so happy to talk ball at that point. [I was like], ‘Let’s get on it, let’s have quizzes.’

Last year was my first time ever playing in a 3-4, so it was a great experience for me. But … [the 4-3] is what I’ve played in since I was 7 years old, so I’m very comfortable in this defense. When dad coached, that was what we ran.

Dad’s stoked. It’s funny because my dad was a Raiders fan, so he loves [defensive coordinator Jack] Del Rio. When we hired him, he was like, “I already know everything about him.”

Also, Del Rio has made it very clear: “If you wanna make a play, go make a play. I’m not going to ever tell you not to.” … I like the ability to be able to trust your instincts. Having that freedom will be helpful, but also that attention to detail is going to have us all be on the same page. Very excited about the defense.

What are reasonable expectations for the unit?

This year, you could play any of the three linebacker spots: Mike, Will or Sam. What do you expect for your role this season?

Right now, everybody’s learning every position. Nobody knows what they’re playing. … My thing is, playing linebacker, you’ve gotta be able to play on all three, so I will make sure I know all three positions. Plug and play, man.

How did you feel in coverage last year?

Baseball players often judge themselves by stats. How do you balance tape and numbers?

I don’t look at stats. The hard part is, in football, stats can never paint the whole picture. If it’s a breakdown in coverage — let’s say my corner and I didn’t communicate. We were playing man coverage, and we didn’t communicate, and we’re both running to each other. If my guy catches the ball, it might go on him on the stat, but it’s like, that’s just a breakdown in coverage.

The stats I pay attention to are the stats that we talk about, like our goals to winning the game. We want to be off the field 65 percent of the time, if we get them in a third-down situation. We want them to kick field goals, or nothing, if they get to the red zone, at least half the time.

When you watched film from last year, what did you see?

I’m kind of a perfectionist, so where people would be like, “Okay, this dude, he had a bunch of tackles, a couple forced fumbles, [tackles for loss], blah blah blah.” When I saw the film, I saw opportunities and I thought: “Dang, I wish I could get that back. I want that back.”

I’ve gone back and watched [last] season a couple times. … People will be like, “Oh, you had a great rookie year,” and I’m like, “No, I want to do better!” I’m champing at the bit to get back.

You played college football at the University of North Carolina while Ron Rivera was coaching down the road in Charlotte. Did you know him before he got hired?

No. … But [a] linebacker that I played with at [UNC], Andre Smith, ended up getting drafted by the Panthers. So as soon as we hired Ron, Andre texted me and he was like: “You’ve got yourself a good one. Ron is a really great fricking coach.” … If people are going to go out of their way just to say something nice about you, that was like, “Okay, this coach must be the real deal.”

Is there anything we didn’t talk about that’s important from this offseason?

Funny, quick story. So, I was down training in South Florida, and I’d come back home for the weekend, and then they shut everything down. And dude, I went into a full panic. I was like, “I’m not going to be able to work out for how long?” So, I called my head strength coach [Chad Engelhardt], and I’m like: “Chad, I need the Sorinex [exercise equipment] rep’s number right now. Like, right now.” … Had him ship me an entire fricking home gym.

Looking back on it, it’s something he never would’ve pulled the trigger on himself, but [my dad’s] so happy that I did it. He uses it. Mom uses it. My niece comes over, she plays over in there. … My girlfriend, she’s a personal trainer, and like, we’re kind of fitness junkies, so to see my family kind of getting back into that, it made me feel good inside.

The family’s got no excuse now.

I was like, “Dad, it’s on.” I used to always say with my buddies [in the group chat] … “Is it grind season, or we got cheat meals going on?” So he’s always sending his meals to my family group chat. It’s funny because my girlfriend’s like his personal health coach, and he’s like: “What can I order? I’m gonna order this.” And she’s like, “Okay, order that, no butter, no bread, don’t even think about eating a french fry.”

Well, the logical last question has to be: Is it grind season?

[Before this drive], I was calling everybody up in Virginia like: “Yo, what’s the deal? Where can we get some workouts in? Who’s up here?” … It is grind season, man.