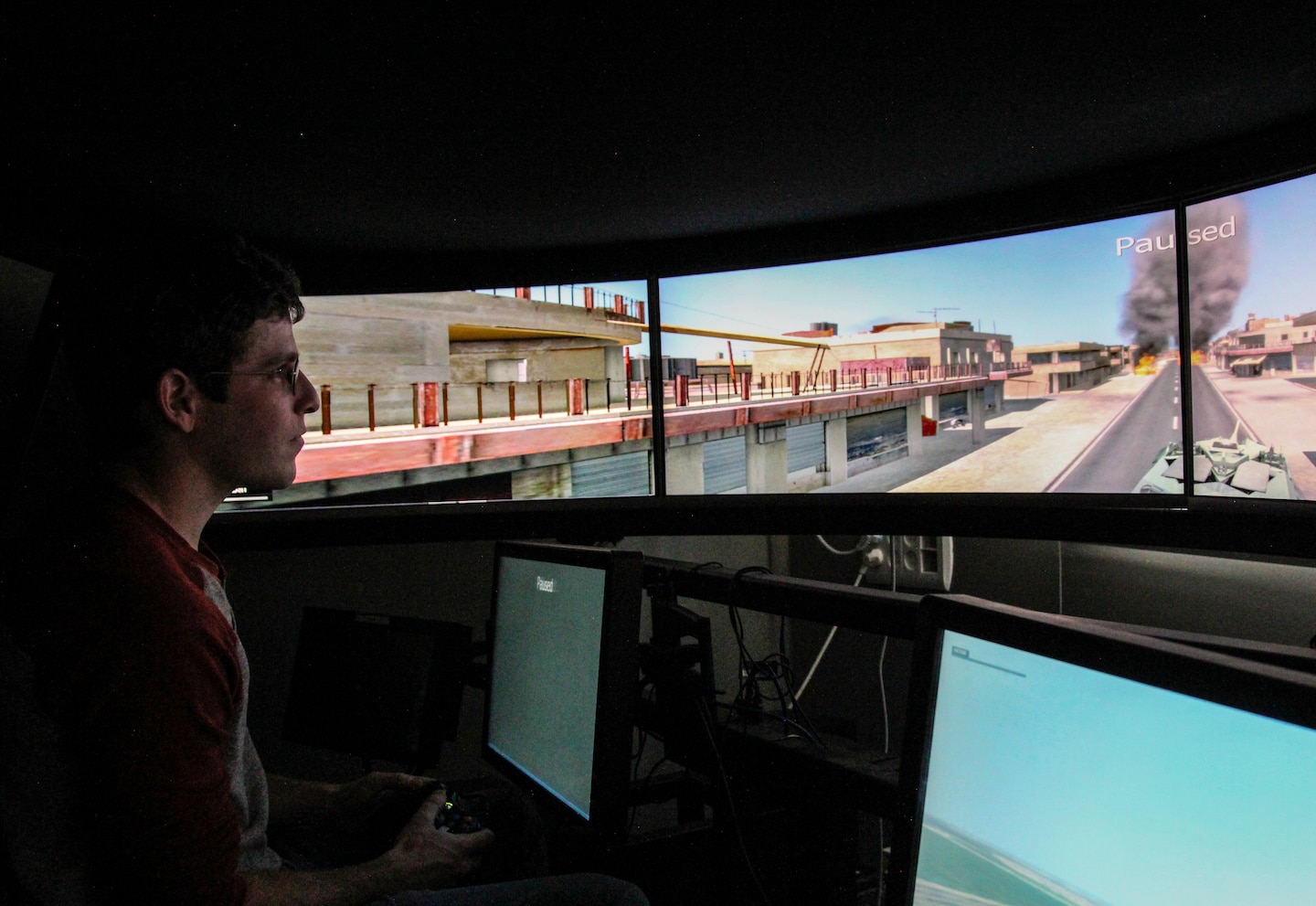 It’s dark in the windowless Carmel, but you can see outside via a panoramic screen. It has tablet-like devices that allow operators to set the vehicle’s speed and change weapons. The side of the screen features up-to-date intelligence information. And controlling the steering, weapons systems and all manner of other operations is a friendly and familiar Microsoft Xbox controller.

The Israeli armor prototype was designed with a specific user experience in mind for the Israeli Defense Force’s active-duty element, which is typically men and women age 18 to 21. Any teen or 20-something who enters the hatch of the Carmel will likely feel familiar with the environment, thanks to video games.

The similarity is no accident. To develop their Carmel model, one of three models under consideration to become the IDF’s next armored fighting vehicle, Israel Aerospace Industries (IAI) engineers and managers worked with teenage gamers who critiqued the system, which originally came equipped with a state of the art fighter jet-like joystick. If approved, the new weapons platform would be operated by the dual thumbsticks, triggers, bumpers and buttons of a video game handset.

“They wanted something lighter and more portable,” said Meir Shabtai, general manager of IAI’s robotics systems operations, which is responsible for the project. Shabtai noted that the drivers wanted the ability to bring the controller into their lap, for instance, instead of using fixed, mounted controls. “From teenagers up to pre-military guys, and guys who are after their service, we let each one play with the [Carmel simulation] and define what kind of skills and what kind of accessories we should use, and according to that we developed the whole system.”

Col. Udi Tzur, battalion commander of the IDF’s 7th Armored Brigade said he has already seen the advantages of optimizing technology for his younger soldiers, such as when his brigade recently introduced a new command and control technology.

“I don’t want to say it took them four minutes, but maximum it took them four hours,” Tzur said. “They are far more willing to experiment, they are much less afraid of technology … it comes to them naturally. It’s not exactly like playing ‘Fortnite,’ but something like that, and amazingly they bring their skills to operational effectiveness in no time. I’ll tell you the truth, I didn’t think it could be reached so quickly.”

“They know exactly the position of those buttons, and they can reach much better performances with that system,” he said. “The controller is just the interface, the whole idea is to present a sophisticated technology in a way they can deal with.”

As such, the new generation of armored crewmen might look less like George Patton and more like your favorite Twitch video game streamer, or Jerusalemite Moshe Friedman, 23, who’s skinny, bespectacled and a bit shy in person. Friedman, an Israeli military vet whose service was focused on robotics, is one of the programmers helping to develop this totally new kind of armored vehicle.

“I’ve played a lot of video games when I was a kid,” Friedman told The Washington Post in a secure area on IAI’s military base-like campus. “Yeah, I think I can say I’m a gamer.”

IAI used design principles from video games as well, using familiar icons and layouts to display information. The screens contain much of the same info one would find when playing “Fortnite” or “Apex Legends,” including a map, a tally of ammo stores and a list of available weapons. It’s also displayed in a way one would expect to see while dropping into “Call of Duty Warzone,” with relevant information framing the crew’s view. Of course, here, the screen displays the reality outside — with live targets and real weapons.

This is not the first time video games and war machines have intersected. Nor is this the first time a gaming device has been used to control a vehicle of war. In 2018, the U.S. Navy’s USS Colorado submarine went into service equipped with an Xbox controller to operate its periscope. In 2014, Xbox controllers were used to control Boeing’s High Energy Laser Mobile Demonstrator in a test for the U.S. military. And in 2008, a team of military and private industry engineers announced their attempts to use Nintendo Wii controllers with bomb disposal robots.

There has also been ethical scrutiny on the subject. United States drone pilots and other observers have likened piloting the unmanned crafts to playing a video game, and a 2012 documentary by The Guardian noted military efforts to recruit pilots from gaming conventions. More recently the U.S. Army’s official video gaming team began streaming on Twitch as part of a recruiting effort that resulted in criticism and claims of first amendment violations when members of the chat were banned from the stream for referencing wartime atrocities. (Twitch is owned by Amazon, whose CEO, Jeff Bezos, owns The Washington Post.)

Critics of the intersection of gaming and war have pointed to the potential desensitizing effect that games could introduce to an arena with lethal consequences. Seeking to fight potential blurring between video games and real life war, Shabtai’s team opted against a virtual reality system with goggles and for an interface that requires a shared sense of reality with other people.

“When you’re dealing with the battle arena itself, you can’t be alone,” Shabtai said. “You’re not fighting in an aircraft, you’re on the ground, with other forces and another team member, everything needs to be connected.” The AI system also integrates weapon selections based on myriad circumstances, he said, giving the example that it would not present the operator with a missile option to respond to a single enemy shooting a rifle from a populated area.

Friedman said the distinctions are very clear. “It’s not being at home, eating and drinking and having fun. This is work,” he said. “There’s also the way [Carmel] moves, the noise it makes, it’s very different from a video game.”

The Carmel armored fighting vehicle (AFV) prototype was created by Israeli Aerospace Industries a part of the Israeli military’s three-year-old Carmel program, which seeks to develop a new concept for armor built around a two-person crew, a “fighter jet-like” cockpit, hybrid propulsion and autonomous capabilities such that, “the soldiers are only required to make decisions that the mechanism cannot (yet) make by itself,” according to a statement from the Israeli Ministry of Defense.

Three Israeli organizations from the military industry approached the task to design the next Israeli tank: Elbit, Rafael and Israel Aerospace Industries (IAI). All prototypes use the U.S. M113 armored personnel carrier (APC) as the base vehicle and all are designed so only two soldiers are needed to operate the tank — down from the four-person crews of the American M1 Abrams tank, the Israeli Merkava tank and most other current generation tanks.

The efforts to create the next generation of tank seek to resolve a number of issues that have made that platform outdated in this modern era of warfare.

“People have declared the tank dead for over a century,” said William F. Owen, a defense analyst and British military veteran. “When people say the tank is dead, what they’re trying to say is that tanks are heavy, expensive, and complicated, and seem to die too easily. … But it still lasts longer than anything else under direct fire.

“Some of this [Carmel technology] is really clever, robust, and well-thought out. But even so, it’s going to be a big leap.”

The video game functionality in the IAI model is not just focused on the user interface. The urban combat-focused vehicle has artificial intelligence that was trained mostly using the game “StarCraft II” and was integrated into the tank with the Unity game engine and VBS platform.

“StarCraft II,” a 10-year-old real time strategy game, is highly regarded by engineers in the AI field, according to Google’s DeepMind Technologies, which last year created AI that defeated a pro StarCraft player. In a post, the company cited “StarCraft II” as an ideal AI trainer due to its constantly changing, real-time, competitive situations, the long duration of matches, incomplete information for players, and a vast playing space that has hundreds of variables.

The AI system for Carmel was reinforced and trained using thousands of scenarios that the technology generates, according to Moshe Beutel, 44, who leads the algorithm group. One of the ways the team developed this technology was by grinding “StarCraft II,” mixed in with a few other games such as “Doom,” to teach the AI different strategies for navigation, target detection, weapon selection and other autonomous capabilities. He and his team also wrote what he called “reinforcement agents,” but which gamers call “bots,” to beat the games.

After only two weeks, Beutel said that his bots performed 20 to 30 percent better than humans in figuring out how to get from point A to point B while fighting several enemies. He defined “better” as “getting to the end point without getting hurt.” The algorithm for the armored vehicle lives on the Unity software engine, an engine that also powers games like “Hearthstone,” “Monument Valley” and “Cuphead.”

Despite all of the upgrades designed to ease and expedite its learning curve, the Carmel still requires operational knowledge beyond merely playing video games. “If you need to train someone to use this vehicle, they also have to have knowledge about how to operate tanks or APCs,” Friedman said, again pointing out the very real dangers outside of the tank. “But in the end you’re holding an Xbox controller.”

Leore Dayan is an Israeli journalist and screenwriter.