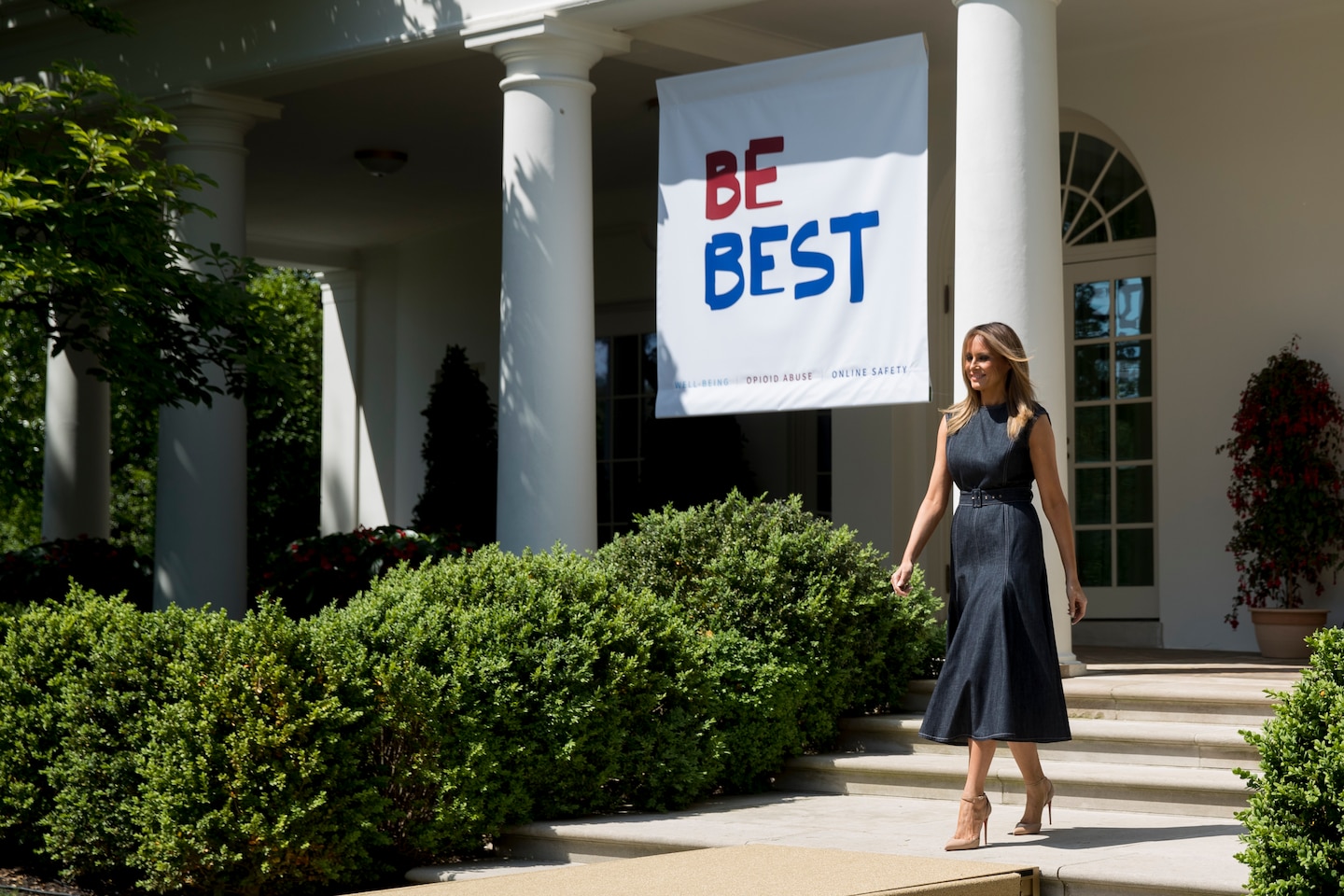 The cost of the project, reportedly paid for with private donations, was not disclosed but will not be insignificant, and it entails the removal and replacement of most of the existing plantings as well as the lawn. The four signature saucer magnolias at each corner of the garden will be kept, but between now and mid-August, if all goes to plan, pretty much everything else will be replaced within a new framework of limestone paths, including the introduction of paving to frame the new lawn. The drainage and irrigation systems will be upgraded, as will the underground electrical cables for the benefit of, yes, media technology and presidential communication. President Trump is said to like presenting himself in the Rose Garden, not just for its historic associations but because the natural light is flattering to his complexion.

For Melania Trump, an admirer of Jacqueline Kennedy, the project brings her closer to her heroine. It was Kennedy’s best friend Rachel “Bunny” Mellon who designed the 1962 garden nestled next to the West Wing.

Inevitably in these politically charged times — little more than three months before the general election and in the midst of Black Lives Matter protests and a deadly pandemic — the lavish redo of the Rose Garden has generated Marie Antoinette comparisons. In reality, the renovation is long overdue.

The project, designed by landscape architects Perry Guillot and Oehme, van Sweden & Associates in consultation with a subcommittee of landscape experts under the aegis of the Committee for the Preservation of the White House Grounds, was well in the works before the current upheavals. Among the problems to be addressed: a poorly drained lawn that had to be replaced annually, constant disturbance of roots of trees and shrubs by the seasonal planting of annuals, the die-off of rose bushes to the point where only a dozen or so remained, and the susceptibility of the defining boxwood parterres to a new, devastating disease named boxwood blight.

The path running north to south on the eastern side of the garden will be straightened, and the accretion of paths of different materials will be replaced with elegant and uniform limestone pavers, some set in an attractive diamond pattern. The boxwood will be replaced with new varieties developed to be resistant to the blight. New infrastructure will be installed.

The renovation is said to restore Mellon’s original design, though there will be a couple of significant changes. One is the limestone path frame to the new lawn, which will be regraded to fix drainage issues. The other is the removal of the old crab apple trees. These were important elements; they brought verticality to the garden but also Mellon’s hallmark Francophilic blend of horticulture and formal design, so evident in her Oak Spring garden in Upperville, Va.

The opposing ranks of five crab apple trees in the Rose Garden had been replaced over the years but struggled in large part because of a willow oak tree planted nearby during the Johnson administration. It is now 80 feet tall and casts deep shadows into the Rose Garden.

One plan called for the number of crab apple trees to be reduced from 10 to six, but by the time the final design was presented to Melania Trump on July 21, they had been eliminated. Eric Groft, vice president of Oehme, van Sweden, noted that in the early 1980s, first lady Nancy Reagan had asked Bunny Mellon to address problems with the garden. “At that time she suggested reducing the crab apple trees from five to three,” he said. “None of her recommendations were implemented.” Mellon died in 2014 at the age of 103.

The rapid installation of the design is in contrast to the time spent developing it; we are told that construction projects at the White House are typically done in high summer when the first family is vacationing. But as any gardener in Washington knows, this is one of the most challenging periods of the year to plant living things, including turf grass.

Perhaps the first lady is mindful that if she wants to leave her mark on the White House, time may be short. She has also been involved in upgrading the bowling alley and the tennis court pavilion.

It is evident that once the Rose Garden is renovated, it will have a different feel to it, with some 200 rose bushes planted in pastel colors. The garden will feel more open and sunnier but perhaps less interesting. It will feel the loss of the crab apple trees, which are full of effervescent blossom in April, decorative fruit in September and a sculptural quality in the winter. They served as a reminder of Washington’s seasonality, and the preciousness of time.

Kennedy also wanted the garden installed in short order, ominously prescient of the brevity of his time there. Right after the Cuban missile crisis, and less than 13 months before his assassination, he famously wrote to Bunny Mellon that “I need not tell you that your garden has been our brightest spot in the somber surroundings of the last few days.”