If he gets a presidential Day 1, Joe Biden has a nearly endless list of ways to spend it 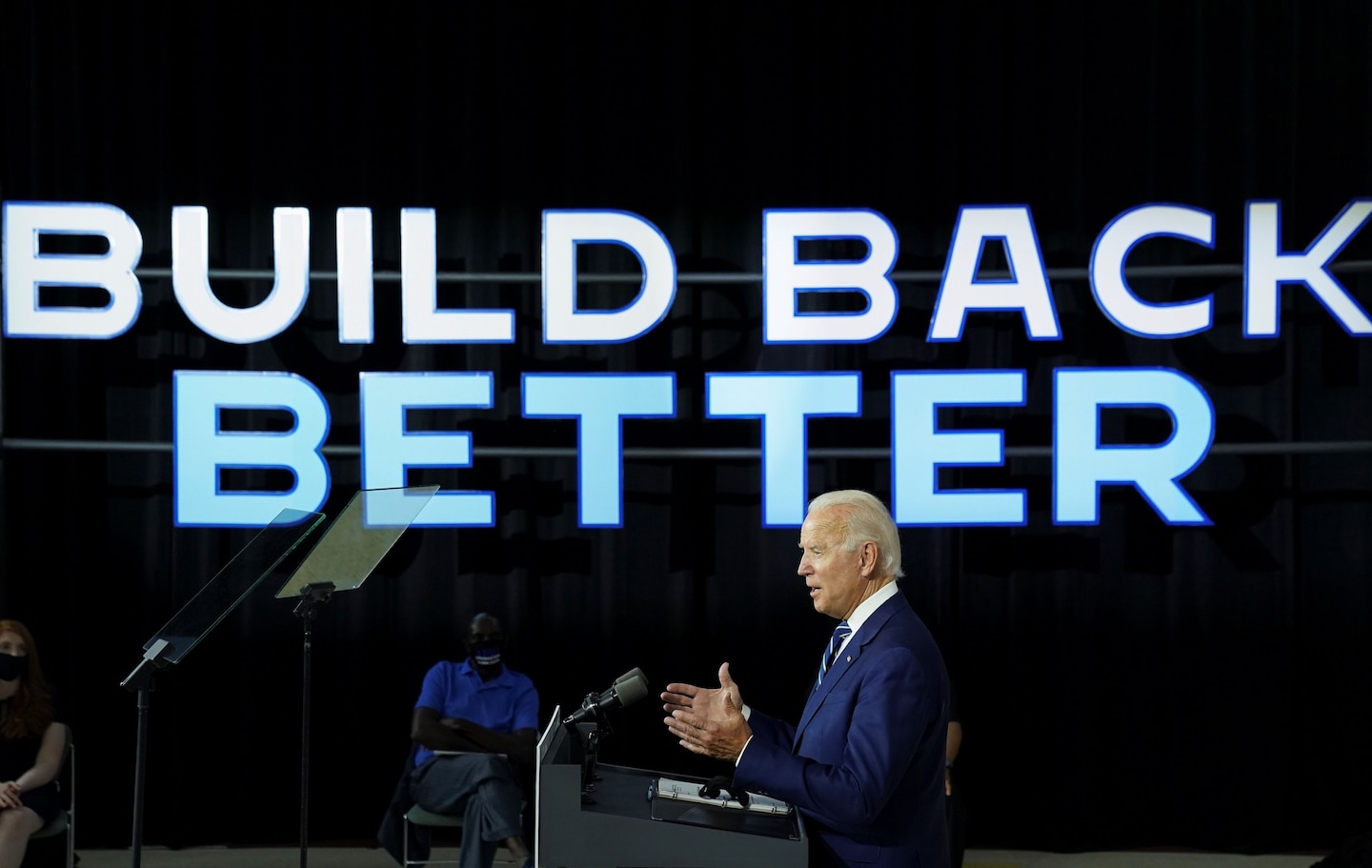 Biden representatives already have held preliminary discussions with top House and Senate Democrats about what to prioritize, according to campaign and congressional aides.

While any transition of power can be jarring — particularly between two presidents of opposite parties — the shift from President Trump to Biden would be among the most head-snapping in American history. There is still a long campaign to run, with scaled-back party conventions next month and three debates expected in the fall, but Biden more and more lately has talked about, strategized over and begun planning for what he would do on Day 1, according to his aides and a review of his public statements.

Presidential candidates have long made “Day 1” pledges that don’t actually occur during the first 24 hours — and often instead guide their first 100 days. But Biden is stretching even the usual limits, with his growing list of far-reaching and wide-ranging commitments.

His advisers acknowledge that he will likely be unable to cram it all in, especially with his attention fixed on the novel coronavirus, but they have been keeping a running tally and reviewing his speeches to determine how to prioritize the Day 1 agenda.

Any president’s opening agenda provides a window into his top priorities and clues to how he would order the items he wants to accomplish. President Barack Obama’s decision to prioritize the economy and health care over immigration and climate change legislation was one that reverberated throughout the rest of his presidency.

But while Obama came into office facing fallout from an economic collapse, the next president in January will confront the twin financial and pandemic crises that have upended Trump’s and Biden’s campaigns.

Biden’s top advisers, many of whom came to work in the White House as the Obama administration dawned, are well underway in their planning. They are identifying which jobs he can fill as soon as he takes office and listing their needs by agency.

“We are taking all the things he has said in the campaign and we are breaking it down, to find out what he can do by himself — like executive orders — and what he can go to Congress with on Day 1,” said Ted Kaufman, the longtime Biden confidant who is leading his transition team.

Kaufman, who worked on the Obama transition in 2008 and — as Biden’s Senate replacement when he became vice president — also wrote the legislation that formalizes the transition planning process, said, “This transition is like no other.”

“Whether you slice and dice different ways, we’re going to have to move on a whole hell of a lot of fronts. We’ve had nothing like this,” Kaufman said. “But we’re preparing. Who knows where the economy is going to be, where covid-19 is going to be? You’ve got to be ready for everything.”

Much of the planning has centered around responding to the coronavirus, without knowing at this point its full scope at the next inauguration.

“It is hard to play out that entire first day because we don’t know exactly what kind of situation he will inherit,” said Stef Feldman, the campaign’s policy director. “The top priority will be getting the virus under control and passing an economic recovery bill.”

“Day 1 for a President Biden is not going to look the same than maybe we would have imagined it five months ago,” she added.

Biden has said that even before the inauguration he would reach out to Anthony S. Fauci, the country’s top infectious-disease expert, asking him for advice. He would quickly appoint a supply commander to oversee production and distribution of testing — and, when ready, vaccines — as well as materials like masks and gowns. He also has pledged to install a “pandemic board” that would be modeled after one President Franklin D. Roosevelt put together near the end of World War II.

If the virus is still widespread, it could significantly impact the traditional spectacle of the transfer of power, including an inauguration that typically draws hundreds of thousands of guests and spectators.

While he has made a point of wearing a mask in public, Biden has said that he would not envision covering his face for the inauguration. Instead, he has said, if need be he would be sworn into office with guests socially distanced on the steps of the U.S. Capitol.

Biden’s nearly never-ending litany of first-day promises has been blurted out on social media, in interviews and during speeches.

“On my first day as President, I will rejoin the @WHO and restore our leadership on the world stage,” he tweeted on July 7.

“Day 1, if I win, I’m going to be on the phone with our NATO allies saying we’re back,” he told KPNX in Phoenix on July 14. “We’re back and you can count on us again.”

He’s pledged to send a bill to Congress repealing liability protections for gun manufacturers, and closing background check loopholes. He would send an immigration bill to Congress creating a pathway to citizenship for 11 million undocumented immigrants and retaining rights for “dreamers” who were brought to the United States as children. He would move to eliminate tax cuts passed under Trump in 2017, affecting individuals as well as large corporations.

He said “on Day 1” he would begin to address systemic racism, although he has not said specifically what he would do immediately. He would “on the first day” direct his secretary of housing and urban development to form a task force and, within 100 days, provide a road map for ending homelessness.

Biden has also made a first-day pledge to issue new sweeping ethics standards that would apply to members of his administration. He would also sign an executive order the first day saying that no member of his administration could influence any Justice Department investigations, and he would aim to give the inspectors general full power to investigate any allegation of improper influence.

Much of Biden’s early agenda will be determined by whether Democrats can win control of the Senate — and, if they do, whether they decide to change the rules governing the chamber. Biden, an institutionalist and one of the longest-serving senators in American history, has long been opposed to changing filibuster rules that empower the minority party by allowing 41 senators to halt a piece of legislation.

But the 36-year senate veteran more recently has expressed new openness to doing away with the filibuster, which could enable the party in power to push through major legislation with a simple majority.

“It’s going to depend on how obstreperous they become,” Biden said of Republicans during a session with opinion journalists this month. “But I think you’re going to just have to take a look at it.”

Biden’s campaign aides and congressional sources say the early discussions about his agenda have not extended to the drafting of any potential bills. The new Congress would be sworn in several weeks before Biden and could start to pass legislation in the works — such as voting rights, labor laws or gun-control legislation that has passed the House but not the Senate — and have it ready for Biden to sign.

Biden’s executive actions could fall into place more swiftly, as they do not require congressional cooperation. He has said he would immediately reverse Trump’s rollback of 100 public health and environmental rules that the Obama administration had in place. He would rejoin the Paris climate accord by executive order, but he would aim to set higher standards.

“The first thing I’d do as president of the United States is call a meeting of all the nations who sign onto the accord, in Washington, D.C., to up the ante,” Biden said during a CNN town hall last year. “Because we’ve learned so much just in the last three years about the science, about what has to happen quicker.”

The time between the election and Inauguration Day would also be a crucial period, with volatility perhaps rivaled only by 1860, when Southern states seceded before Abraham Lincoln took office, and 1932, when Herbert Hoover sought to undermine Roosevelt.

“Hoover was making the country suffer for having voted for Roosevelt,” said Eric Rauchway, a historian and author of “Winter War: Hoover, Roosevelt, and the First Clash Over the New Deal.” “Should President Trump lose the election, he might not be very happy about it, on a level that would probably rise to Hoover’s epic level of disaffection with the country.”

Despite the animosity during past transition periods, he added, “I think it’s easy to imagine this one being worse, I’m sorry to say.”

Trump’s campaign defended the incumbent’s accomplishments and ridiculed Biden for not using the 44 years he spent in federal office to pass the agenda items he is now proposing.

“There will be no Day 1 for Joe Biden as president because the choice couldn’t be more clear in November — Biden is a puppet for American socialists and is running on their platform,” said Ken Farnaso, deputy national press secretary for the Trump campaign.

Trump has done far less to articulate what he would do with a second term, largely making the case for continuing the policies that he ran on the first time. When Sean Hannity asked about his second term during an interview Thursday night on Fox News, Trump said he would complete the wall, increase American manufacturing and end foreign entanglements.

During his 2016 campaign, Trump also pledged to have an ambitious first day. He said one of his first acts as president would be to call a special congressional session to repeal and replace Obama’s health-care law. He did not, and the law remains on the books, if threatened by a Trump-backed court fight. He promised to begin work on a wall along the border with Mexico on the first day; it did not start then and is still not close to completion.

In the lead-up to his inauguration, Trump declared that, because he was sworn in on a Friday, his first day agenda should be granted an extension.

“Day 1 — which I will consider to be Monday as opposed to Friday or Saturday. Right? I mean my Day 1 is going to be Monday because I don’t want to be signing and get it mixed up with lots of celebration,” Trump said in an interview with the Times of London.

But the celebrations are something Biden, if elected, would not have to give as much consideration.

“We’ll see you at the inaugural party,” Gov. Jay Inslee (D-Wash.) said to conclude a recent virtual town hall conducted by the Biden campaign. “It’ll be a good party!”

Karine Jean-Pierre, a senior Biden adviser, interjected that there may not actually be a party. “I think we may have to social distance,” she said.

“Social distanced, or together — either way it’ll be a great party,” Inslee responded. “Mask up, wash your hands. Good luck, everybody.”