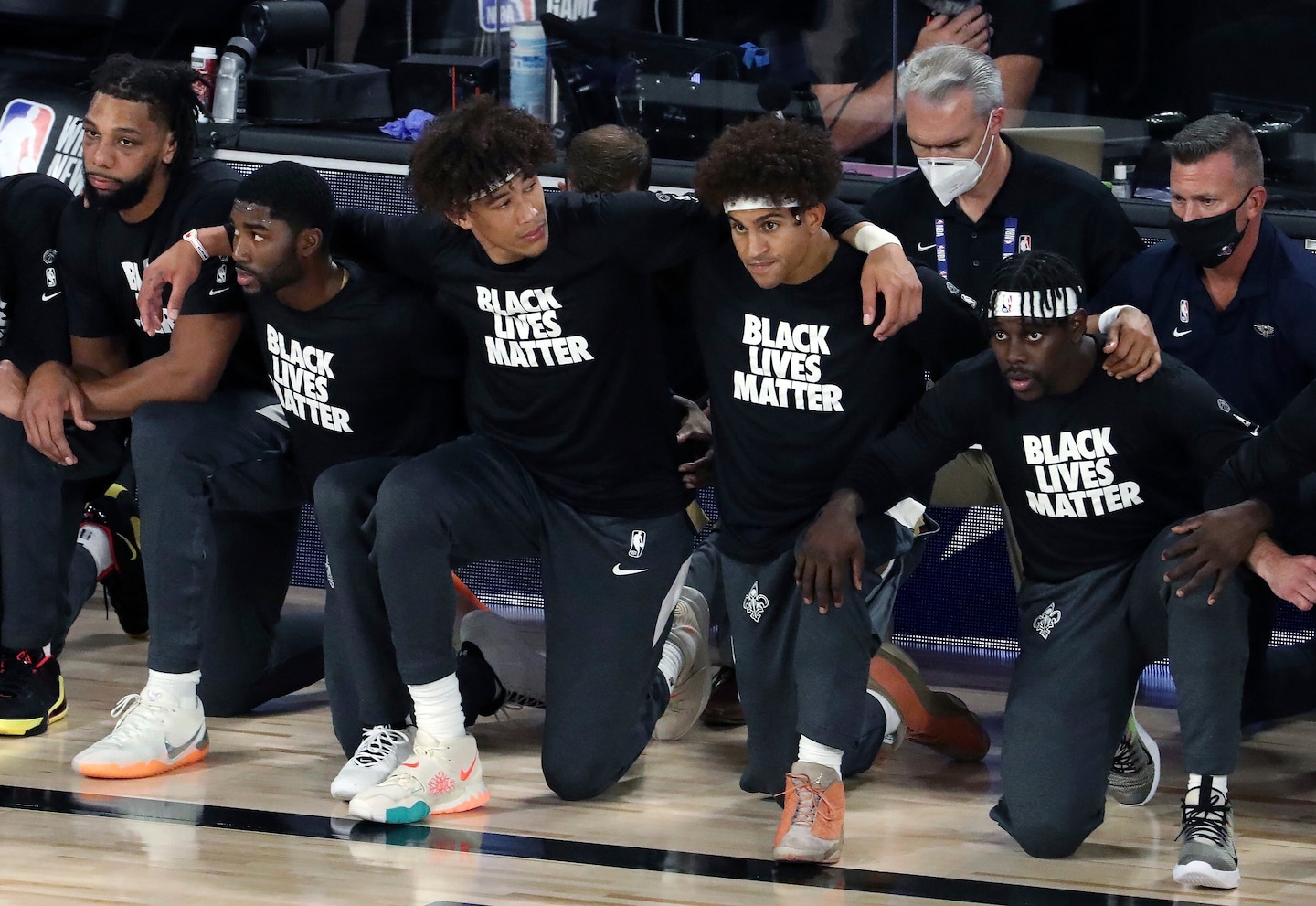 The night opened with the Pelicans and Jazz players and coaches, along with their game’s referees, locking arms and kneeling in union for the national anthem while an extended video montage played. Players also donned black “Black Lives Matter” warmup shirts and wore social justice messages such as “Say Her Name” and “I Am a Man” in place of their last names on the backs of their jerseys. The playing surface also was emblazoned with a large “Black Lives Matter” decal.

After the teams dispersed to their benches, National Basketball Players Association Executive Director Michele Roberts, who has guided the players’ efforts to continue their advocacy while in the bubble, led a scattered round of applause and later said in a statement that she was “very proud” of the “sober, powerfully moving” and “heartfelt” demonstration.

The scene repeated a few hours later when the Lakers and Clippers knelt together during the anthem in front of a video board that displayed a large American flag. The anthem demonstrations marked the NBA’s first since NFL quarterback Colin Kaepernick knelt to protest police brutality in 2016.

“I respect our teams’ unified act of peaceful protest for social justice,” NBA Commissioner Adam Silver said in a statement, “and under these unique circumstances will not enforce our long-standing rule requiring standing during the playing of our national anthem.”

Multiple players who participated in the demonstrations called them an “emotional” experience. Pelicans guard JJ Redick defended the collective kneeling from potential critics who might believe the players were politicizing the anthem.

“The majority of Americans want social justice, real equality and to end police brutality,” Redick said. “The polls back that up. Politics and sports coexist now. The league has recognized that.”

The NBA’s long path to this intentional opening was marred by numerous potholes this week, including an ESPN investigation into alleged physical abuse at Chinese training academies and a Sports Illustrated article that detailed an alleged sexual assault by a Dallas Mavericks executive. Clippers guard Lou Williams made an unexpected trip to an Atlanta strip club, which violated the league’s health protocols and landed him in a 10-day quarantine upon his return, while Denver Nuggets forward Michael Porter Jr.’s assertion that the coronavirus was “being used for population control” drew widespread rebukes, including from Silver.

But on the bubble’s most fundamental issue — the health of the 1,000-plus players, coaches, staffers and media members living at Disney World — the NBA’s record remained unblemished. While positive tests have popped up in NFL training camps and prompted the cancellation of MLB games, the NBA completed its abbreviated training camp and week of scrimmages without any player testing positive after fully entering the bubble.

Perhaps buoyed by that track record, the bubble buzzed with anticipation Thursday in advance of opening night. Coaches and media members jumped rope, rode bikes and ran sprints during morning workouts, while a large group of referees gathered for heated pickleball games before the temperature reached 95 degrees in the afternoon. One league official smiled widely at the prospect of games returning after more than four months off, noting that it had been “a long time coming.”

The opening night doubleheader encapsulated the trying circumstances facing the NBA. Silver flew in this week from New York City, but the league’s health protocols mandated that he remain in the arena’s upper deck and avoid direct contact with players and coaches because he hadn’t cleared the full quarantine process. Roberts took a courtside seat because she arrived earlier this month and cleared the bubble’s full quarantine process.

Rudy Gobert, the “patient zero” of American sports whose positive test March 11 precipitated the NBA’s shutdown, scored the first game’s first points for the Jazz and hit the game-winning free throws in the two-point win. Zion Williamson countered with 13 points in 15 minutes for the Pelicans, who limited the hyped top overall pick’s minutes after he left the bubble this month for a family issue.

In the nightcap, LeBron James, who scored the winning basket on a putback with 12.8 seconds left, and the Lakers were without Avery Bradley, who elected to sit out the restart because of coronavirus concerns, while the Clippers made do without Williams and Montrezl Harrell because of personal matters that required they exit the bubble in recent days. All players must undergo daily coronavirus testing while in the bubble, and those who leave to attend to family matters or other emergencies must quarantine for at least four days upon their return.

To host games more safely during the pandemic, the league committed to spending at least $150 million to construct and operate the restricted, single-site bubble near Orlando. Without fans in the stands, the NBA built elaborate made-for-television courts with video boards, robotic cameras and enhanced microphones to craft an intimate viewing experience. Live video of fans cheering from home can be superimposed onto the video boards behind the benches, and the sound system pumps in rap music, crowd noise and other sound effects to spice up the experience.

Some of these efforts were aimed at recreating a home-court advantage. To mimic New Orleans’s Smoothie King Center for the opener, the video boards displayed the Pelicans’ “Won’t Bow Down” slogan and flashed images of their logo, player headshots and supportive tweets from fans. A small crowd, which included league executives such as Sam Presti of the Oklahoma City Thunder and Lawrence Frank of the Clippers, barely reacted as the teams took the court, and the small venue remained largely silent throughout the night.

The NBA’s official restart slogan — “Whole New Game” — was plastered around the venues, and indeed there were changes to be seen in all directions. The players sat on socially distanced benches; ballboys donned masks, medical gloves and “Black Lives Matter” T-shirts; and referees used whistles with cloth coverings to catch their spittle. Staffers at the NBA’s new-look scorer’s table, protected by high plexiglass walls to limit contact with players, looked on from the sideline.

Because the courts must be thoroughly cleaned and disinfected after each game, the NBA’s doubleheader took place at two venues to avoid any delays for the television audience. A select group of media members was able to attend both games, walking the short distance from one gym to another.

All things considered, the players, coaches and media members in attendance seemed to be adapting well to the onerous health protocols, closed campus and empty gyms. While the NBA will need to keep its bubble intact for at least 10 more weeks to crown a champion, the festivities opened on an optimistic note.

Proving Gentry’s point, several NBA stars, including Damian Lillard and Carmelo Anthony, sat courtside to watch the Lakers and Clippers. After one first-half dunk, James looked over in the direction of his colleagues as he celebrated.