Nicholas Sandmann and his lawyers are playing for keeps 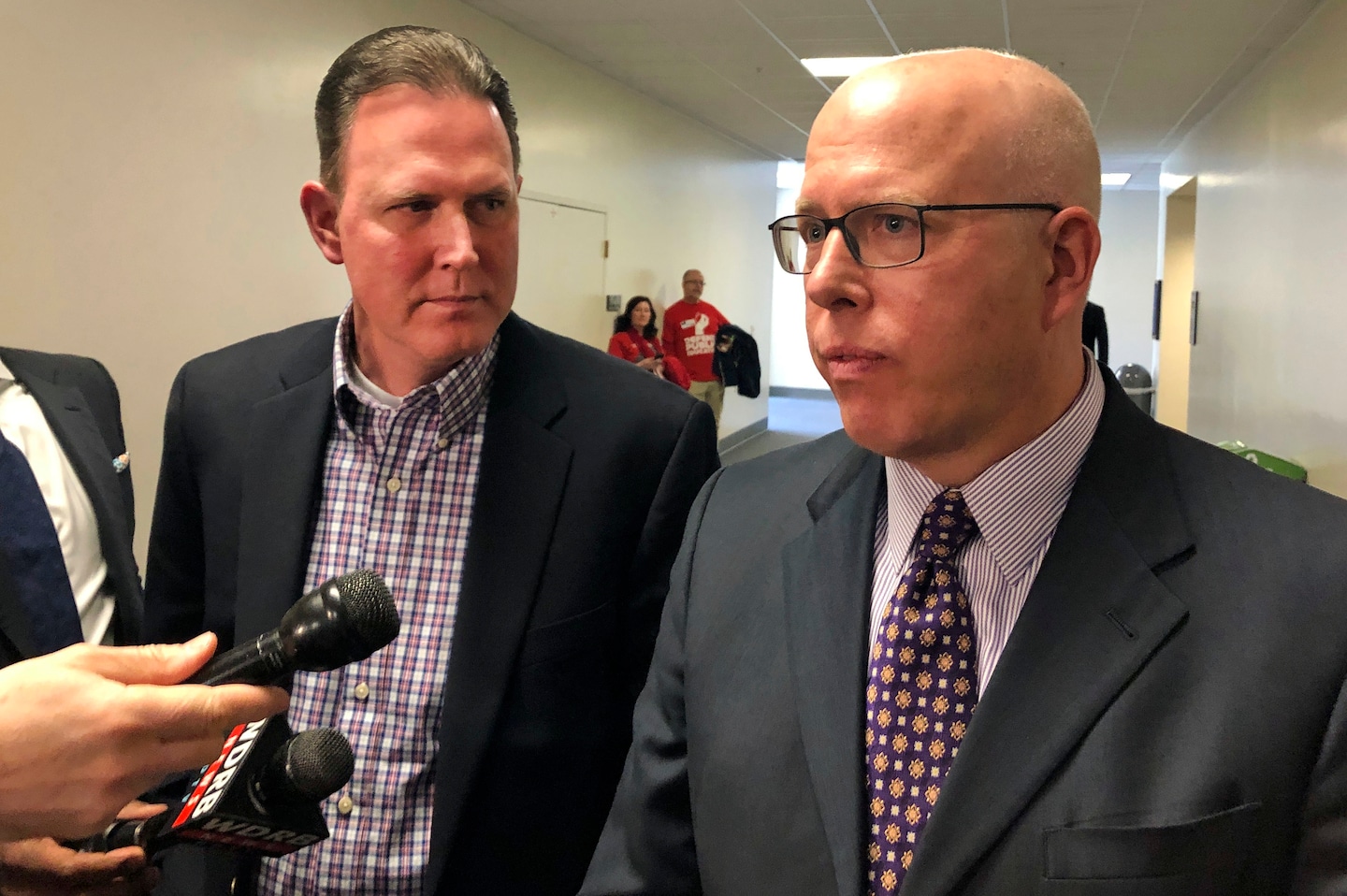 Twitter appears to be next. And then? “After the Twitter complaint is filed, there is a strong likelihood that a number of individuals who falsely attacked and threatened Nicholas on Twitter will be sued,” noted Wood in an email.

“Jack,” in this case, is Twitter chief executive Jack Dorsey, who has a heightening profile in the country’s political battles. Twitter has recently begun annotating particularly harmful tweets from President Trump, a move that reignited claims that the company is biased against Republicans and their allies. Some critics favor scaling back the protections afforded to Twitter and other social media companies under Section 230 of the Communications Decency Act of 1996, a provision that shields communications companies from liability for most content posted on their platforms by third-party users. If Twitter and its brethren “have now decided to exercise an editorial role like a publisher then they should no longer be shielded from liability & treated as publishers under the law,” tweeted Sen. Marco Rubio (R-Fla.) in May.

In Wood’s view, Twitter is “engaged in editing and publishing content” and so doesn’t deserve immunity under Section 230. The provision, he further argues, took effect before social media evolved and wasn’t “intended to address ‘platforms’ such as Twitter.”

A Twitter spokesman declined to comment on prospective litigation. Aaron Mackey, a staff attorney for the Electronic Frontier Foundation, says that “immunity for user-generated content is not premised on requiring platforms to be passive conduits of their users’ speech. The language of the statute contains no such requirement and no court that I am aware of has ever interpreted the law as requiring platforms to be hands-off.” The section, he says, “immunizes any online service that hosts user-generated content from legal claims based on that user-generated content” — not just services that existed in the 1990s.

Wood these days is assailing his critics on — where else? — Twitter. The offensive has included slights at folks who’ve suggested that those settlements aren’t much to speak of. After CNN host Brian Stelter retweeted such a thought, Wood lashed out:

In a chat with the Erik Wemple Blog, Wood displayed the same bravado: “If there is anybody who published a false accusation against this boy, whether it be on Twitter or the mainstream media, that has not yet been sued, they should not sleep well for the next several months,” says Wood, who noted that his team and Sandmann would make a decision on their next steps “over the course of time.”

Putting aside legalities, Twitter performed many roles for the mainstream media in the Sandmann case: tipster, source, assignment editor and more. Via a plume of like-minded tweets, thousands of people who weren’t on hand to witness the events in question molded an impression of the goings-on that proved difficult to puncture. Much of the momentum on this front stemmed from a single tweet from an account that Twitter later suspended. “This MAGA loser gleefully bothering a Native American protester at the Indigenous Peoples March,” said the post from account @2020fight. Included in the tweet was a short video of Sandmann, then a 16-year-old student at Covington Catholic High School, wearing a MAGA hat and standing face to face with Phillips. The video racked up at least 2.5 million views, according to CNN.

Depending on your perspective, Sandmann — who is now 18 — was either smiling affably at Phillips or smirking in a pose of condescension.

The posting from @2020fight touched off a days-long frenzy of commentary, the first wave of which was inimical to Sandmann and his schoolmates. Condemnations were everywhere. The prevailing sentiment stemmed from the physics of the situation: In the short video, youngsters seemed to surround Phillips and his contingent. It initially appeared, therefore, that the kids had swarmed Phillips & Co. in an act of aggression and harassment.

Videos with a wider sweep then emerged. As it turned out, Phillips and his fellow activists had trudged into the middle of the assembled students, not the other way around. In one of his statements about the events, Phillips insisted to the Associated Press that he was trying to defuse a confrontation between the Covington students and a group of Hebrew Israelites who were attempting to provoke the students and other bystanders with vile and offensive taunts. “What I saw was my country being torn apart. I couldn’t stand by and let that happen,” Phillips said.

Social media onlookers were still entitled to their opinions on how the school kids behaved amid the confrontation. Even an investigation for the Covington Diocese and Covington Catholic High School concluded that “some students performed a ‘tomahawk chop’ to the beat of Mr. Phillips’ drumming and some joined in Mr. Phillips’ chant.” (Sandmann did not do the “tomahawk chop.”) In a piece for Deadspin, Laura Wagner pointed to the chop, among other considerations, in arguing that the additional videotape didn’t provide a more charitable angle on the kids’ conduct. “Don’t Doubt What You Saw With Your Own Eyes,” reads the piece’s headline.

But the Twitter uproar convinced many mainstream media outlets that articles needed to be written right away. The results were lamentable, in large part because there was no swarm of reporters assembled to chronicle the tail end of a Kentucky school’s field trip to Washington. In a post about the controversy, this blog plotted how CNN, the New York Times and The Post adjusted their versions of the event as they gathered more information.

Wood and Kentucky attorney Todd McMurtry have argued in their filings that the portrayals defamed Sandmann. In the suit against Rolling Stone, for example, the lawyers write that the magazine “accused Nicholas of behavior constituting menacing racial intimidation of Phillips, a Native American political activist, while Phillips was purportedly engaged in peaceful song and prayer at the Lincoln Memorial.” Rolling Stone, as well as other outlets sued by Sandmann, used a quote from Phillips first published in The Post. “It was getting ugly, and I was thinking: ‘I’ve got to find myself an exit out of this situation and finish my song at the Lincoln Memorial.’ I started going that way, and that guy in the hat stood in my way, and we were at an impasse. He just blocked my way and wouldn’t allow me to retreat.”

That claim was “unequivocally and provably false,” argues the Sandmann suit against Rolling Stone. Phillips’s version of events, argues the litigation, imputes racist conduct to Sandmann, not to mention a “hate crime” for allegedly “interfering” in Native American song and prayer. Other outlets cited in Sandmann lawsuits for republishing the Post quote include ABC News, NBC News, Gannett and the New York Times. In their various complaints, Sandmann’s lawyers have pointed out that reliance on the word of Phillips is a dicey journalistic proposition, considering that he told The Post that he’d been “blocked”; the Associated Press that he’d tried to defuse a situation; and Democracy Now that he was focused on “taking the youth out of there, the Indigenous youth that was with me.”

A great deal of legal work went into the fundamentals of being “blocked,” and not in the Twitter sense. Was that just Phillips’s opinion, in which case news outlets enjoy wholesome constitutional protections in publishing it? Or was that a fact, in which case it could serve as a basis for a defamation complaint? In a July 2019 ruling, U.S. District Judge William O. Bertelsman found that the “blocked” statement was indeed an opinion, an assertion that was not “capable of being proved objectively incorrect.” In a motion for reconsideration, however, Sandmann’s lawyers argued it was a plain-as-day fact. Kevin T. Baine, a Williams & Connolly lawyer arguing for The Post, countered in a subsequent hearing: “Mr. Phillips’ perception was that because of all that, he was blocked. Mr. Sandmann’s perception was, well, I didn’t block him.”

Through an order last October, Bertelsman allowed the case to proceed, but only with respect to statements that Sandmann had “blocked” Phillips and “would not allow him to retreat.” That decision set the stage for last week’s announcement that the parties had settled the case. “We are pleased that we have been able to reach a mutually agreeable resolution of the remaining claims of the lawsuit,” said Post spokeswoman Kris Coratti in a statement to her own paper. After Sandmann filed suit against the newspaper, it published an editor’s note clarifying that additional information arose “contradicting or failing to confirm accounts provided in this story — including that Native American activist Nathan Phillips was prevented by one student from moving on, that his group had been taunted by the students in the lead-up to the encounter, and that the students were trying to instigate a conflict.”

For working journalists, there are lessons here. The narrow one is that eyewitnesses and sources mix fact, impression and opinion in their interviews; legal protections for those sorts of statements vary, so be careful in quoting them. The broad one is that just because all your peers on Twitter agree on the takeaway from a minute-long video doesn’t mean a thing.

Twitter-active journalists and commentators may face down these very issues if Sandmann sues the blue check mark crowd. According to Wood, the statute of limitations “tolls” for minors in such cases, so that he’ll have a year from Sandmann’s 18th birthday — which was earlier this month — to bring cases against Twitter and its account holders. He has some useful experience in this realm, as he filed a defamation suit against MSNBC’s Joy Reid over her social media posts attacking a woman named Roslyn La Liberte for allegedly participating in racist conduct at a California community meeting.