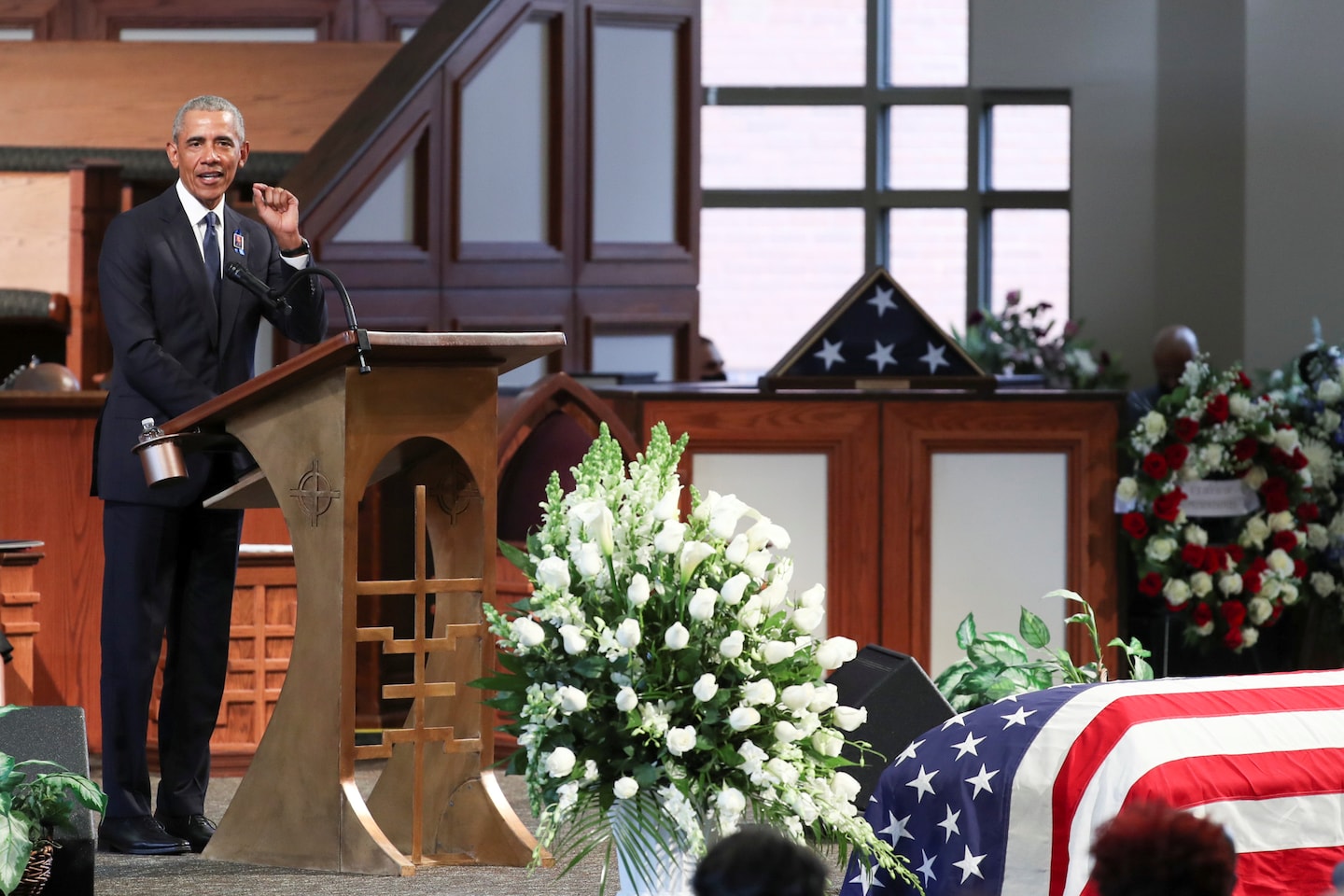 Lewis’s life story is well-known by now, but my favorite anecdote, retold by Bush, bears repeating. It concerns a little boy growing up on a farm in Troy, Ala., in the 1940s, who, at age 4, was compelled to deliver the gospel:

“Every morning, he would rise before the sun to tend to the flock of chickens,” said Bush. “He loved those chickens. Already called to be a minister who took care of others, John fed them and tended to their every need. Even their spiritual ones: for John baptized them, he married them, and he preached to them. When his parents claimed one for family supper, John refused to eat one of his flock. Going hungry was his first act of nonviolent protest.”

Though everyone present knew the story, they laughed and applauded enthusiastically. It occurred to me that the audience’s response owed as much to Bush’s presence as to his remarks. Gratitude, perhaps. And relief that this old-school Republican and Democrats could join in common prayer.

Bush was at his authentic best — the deeply compassionate and humble man the public rarely got to see — and spoke of the things that make us human. With Lewis as a model, he reminded us that there are other ways to be, to lead and to govern.

Clinton and Obama were equally moving in very different ways. I was struck by the honey-drip tempo of Clinton’s remarks, delivered with a touch of nostalgia and an elder’s appreciation for the good that even flawed men do. So accustomed have we become to the rapid-fire riposte, the staccato of TV talk and the insulting nit-wittery of twittery, that a thoughtful, considered speech in no hurry to get somewhere was almost hypnotic.

It was fitting that Obama picked up the tempo as he was the natural one to take the baton from Lewis in the ongoing relay of civil rights. He pointedly spoke of the segregated world into which Lewis was born and the farm where his parents picked “somebody’s else’s cotton.” He credited Lewis for what he, himself, became — a U.S. senator and the first Black president of the United States. Through 45 arrests and countless beatings, most memorably during the Bloody Sunday march Lewis helped lead across the Edmund Pettus Bridge in Selma, Ala., he had paved the way for Obama. The 1965 march itself was nonviolent, but the state troopers, who had been authorized to use force by then-Alabama Gov. George Wallace, were not.

Lewis suffered a grave head injury that day and had to be hospitalized.

I’ve studied film clips of the march and tried to imagine the fortitude required for Lewis, among hundreds, to face a swarm of White, baton-wielding troopers, knowing that he might die, and to keep moving. For a man such as Lewis, the source of his strength may correspond to something I recently read taped to a restroom mirror. Handwritten in cursive on flowery notepaper, it said: “Courage is fear that has said its prayers.”

Many say the Georgia congressman’s life mission was divinely inspired; others have described him as a saint. Among things providential, I would add the timing of his death in the midst of a pandemic, urban unrest and a pivotal presidential election fraught with complexities — from a sitting president who threatens to postpone the election to worries about voter suppression and the potential for fraud through mail-in ballots. Lewis believed in the Black Lives Matter movement and continued to counsel nonviolent civil disobedience. “Good trouble,” he called it.

It is good to be reminded of that message now, as well as to consider what Bush called Lewis’s lesson to us all: “That we must all keep ourselves open to hearing the call of love.” We don’t often hear words like that these days.

The grace and eloquence of Bush, Clinton and Obama were a balm to the soul of America, as were the words of so many others, especially the Rev. James Lawson, 91, who taught Lewis about nonviolence, and House Speaker Nancy Pelosi (D-Calif.), whose sometimes emotional eulogy felt like a soothing bedtime story. Perhaps it was — for a little boy from Troy, who rehearsed with his chickens the message he would bring to his community and the nation.

Goodnight and sweet dreams, Congressman. May your soul be rested.