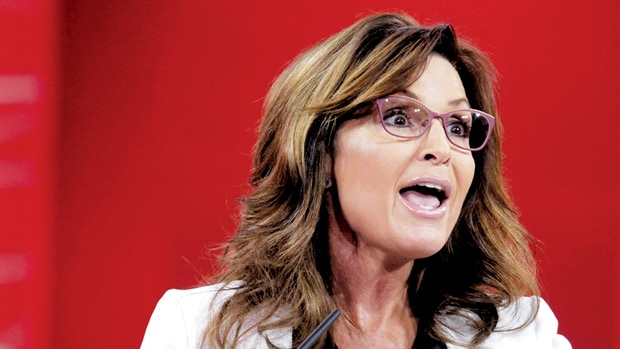 Palin’s complaint hinges on some bad journalism. On June 14, 2017, James Hodgkinson, a supporter of Bernie Sanders, opened fire on GOP congressmen — including Rep. Steve Scalise (La.) —during a baseball practice in Virginia. New York Times editorial staffers got to work, determining how they would weave the event into larger points about gun control and the fractious U.S. political climate. According to court documents, then-editorial board member Robert Semple riffed in a message to colleagues, “while this is almost certainly a lone nut, it would be interesting to know ho[w] many of those Republican athletes are beholden to the NRA and its generally anti-regulatory philosophy, and whether something like this might pound a little sense into their heads … ”

As the Erik Wemple Blog has reported, then-editorial page editor James Bennet took delivery of a draft editorial from Elizabeth Williamson — who now works on the Times news staff — and mangled it. Eagle-eyed social-media types caught a problem in the editorial’s attempt to tie in the 2011 rampage of Jared Lee Loughner in Arizona:

A subsequent passage reinforced the point: “Conservatives and right-wing media were quick on Wednesday to demand forceful condemnation of hate speech and crimes by anti-Trump liberals. They’re right. Though there’s no sign of incitement as direct as in the Giffords attack, liberals should of course hold themselves to the same standard of decency that they ask for of the right.” The Times published a correction stating that “no such link was established” and that the editorial had improperly described the map circulated by Palin’s PAC.

Monday’s hearing toured the brain of Bennet, as required by the “actual malice” standard. Showing that Bennet knew he was publishing falsehoods means probing his state of mind. Same thing with “reckless disregard,” which entails demonstrating that the journalist “entertained serious doubts as to the truth of his publication” or purposely sidestepped the truth, as explained previously in this blog.

Representing the Times, Jay Ward Brown of Ballard Spahr rolled out an argument that is a bit difficult to reconcile with the editorial’s language. At the time of publication, Brown contended, Bennet was “unaware” that the editorial “could or would be construed by readers that Palin incited” Loughner’s attack. Remember, the editorial said “the link to political incitement was clear.”

However, according to the paper’s motion for summary judgment, Bennet testified that his intent was more squishy and indirect: “to express concern about the state of political rhetoric in the country of political incitement, the danger that we’re increasingly treating political opponents like enemies in a conflict.”

Judge Rakoff engaged Brown on this point. What if some media organization published a statement that “Mr. Jones is a cold-blooded murderer and let’s assume that Mr. Jones never committed any kind of crime, let alone murder,” posited the judge. There’s no ambiguity in those words, said Rakoff. Couldn’t a “reasonable juror” find actual malice there? Brown responded by citing a libel expert who had written that statements examined in defamation proceedings must be evaluated on intent.

The judge followed up. “Supposing the defendant at his deposition says, ‘When I said Jones was a cold-blooded murderer, of course I didn’t mean that literally. I just meant that he’s a rather nasty guy. And in my wildest dreams, I never thought people would take me literally.’ Can not a jury say that’s preposterous: the words are so unequivocal, the statement was so without qualification that we don’t believe for one second that you didn’t mean it literally?” Rakoff conceded that such a consideration alone may not satisfy the plaintiff’s burden, but he believes, based on case law, that it can be in the “mix.”

To highlight Bennet’s lack of awareness regarding his own work, Brown cited an email exchange between Bennet — who resigned as editorial page editor in June after the Tom Cotton op-ed controversy — and Ross Douthat, a Times columnist, after the editorial hit the Internet. According to court documents, Douthat alerted Bennet to the lack of evidence about any link between Palin and Loughner’s actions. Bennet responded:

Thanks, and I’ll look into this tomorrow. But my understanding [is] that in the Giffords case there was a gun sight superimposed over her district; so far in this case we don’t know of any direct threat against any of the congressman on the field. That’s not to say that any of it is ok, obviously, or that the violence in either case was caused by the political rhetoric. But the incitement in this case seems, so far, to be less specific.

Bennet indeed looked into it the next day, instructing colleagues to explore “what the truth is here” regarding the alleged Palin-Loughner linkage. Such a directive could well be interpreted as an indication that Bennet didn’t know that his edits were conveying a falsehood.

Yet attorney Shane Vogt, who argued for Palin, turned that argument on its nose. If Bennet hadn’t meant to suggest incitement by Palin (or her PAC), he would have responded differently to the backlash from Douthat and readers. Instead of tasking colleagues with looking into the matter, he would have said, “ ‘Oh, that’s not what I meant,’ ” argued Vogt.

Other arguments from Vogt:

After Vogt made his claim about “self-serving” defendants, Rakoff challenged him. “It may be that a self-serving statement of lack of intent is entitled to little or no weight but even assuming,” said Rakoff, “that that is the case, you would still have to have affirmative evidence to the contrary to meet the burden of proof, which is yours.”

And what a burden it is. Among her filings in this case, Palin argued that Sullivan has essentially expired. “It has become clear that the rule is obsolete and unworkable, incapable of consistent application, and holds no footing in the modern speech landscape. Defamation plaintiffs should not be subjected to its unwarranted burden,” argued Vogt, echoing criticisms by other attorneys in this area. As this blog noted last year, plaintiff attorneys have been spoiling for an appeal of Sullivan. In that endeavor, they draw encouragement from Supreme Court Justice Clarence Thomas, who in February 2019 called for reconsideration of the standard. President Trump has vowed to “open up” libel laws, though he has little power in this realm.

To all these folks, we present a cliche: Be careful what you wish for. Though Sullivan, in Palin’s case, is protecting the Times, it doesn’t discriminate. Fox News, Palin’s former employer, adores the actual-malice standard, as does the president, who’s been known to tar a public figure or two.

Rakoff will decide in August whether to send Palin’s case to a jury.