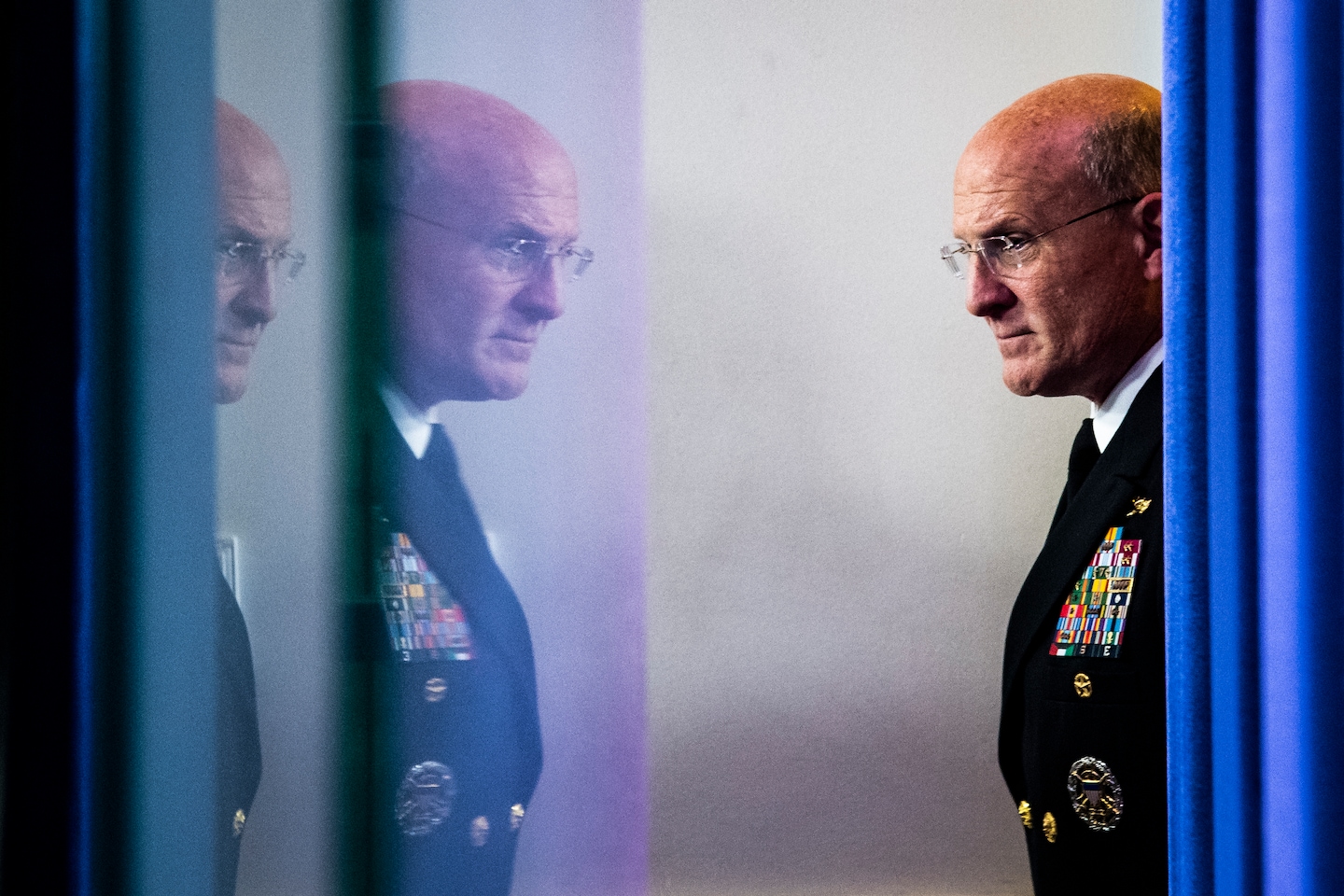 This is the kind of upbeat message that Navy commanders have for centuries delivered from the bridge while facing adversity. But is it enough? After a chain of accidents at sea, ethical lapses and instances of poor judgment over the past half-dozen years, the shipboard fire earlier this month offers another siren warning that the Navy is badly stressed — operating too hard, with too little training and too much political interference.

And fixing the Navy matters to the country: The era of ground combat in the Middle East is coming to an end, but the need to project sea power in Asia to contain a rising China is just beginning.

Gilday knows he needs to be a strong leader now, in the Navy’s time of troubles. But he faces a heavy lift. The Navy is the military’s most hierarchical service, and also the loneliest for a commander. Serving as the chief of naval operations, or CNO, is a special challenge for Gilday, 57, who was jumped from three stars to four a year ago when he was named to the top post, bypassing other, more senior admirals.

A quiet, self-effacing man, Gilday is impossible not to like. But in his first year as CNO, he has struggled to keep the Navy’s balance as President Trump overruled his recommendation on a discipline case involving a Navy SEAL, and acting Navy Secretary Thomas B. Modly short-circuited his investigation of the dismissal of Capt. Brett Crozier of the USS Theodore Roosevelt after an outbreak of covid-19. “Gilday lost a year,” says a former four-star. He’s only now planting his flag.

Gilday discussed the Navy’s problems with me during a frank, hour-long interview last week, initiated at his request. When I asked for his “theory of the case” about what’s wrong, he focused on two areas. The first was professional competency, which was demonstrably flawed in two 2017 ship collisions and in Crozier’s ham-handed handling of the Theodore Roosevelt. The second involved character lapses, evident in SEAL discipline cases and the “Fat Leonard” corruption scandal involving the Pacific fleet.

Gilday says he wants to reboot the Navy’s core culture, which begins with proficiency at sea. The Navy’s operations tempo has been so stretched over the past two decades that officers and sailors don’t have time to learn good seamanship and navigation. The sea is unforgiving; it magnifies the smallest mistakes. And sadly, in this stressed fleet, too many have cut ethical corners.

Adm. John C. Harvey Jr., a retired commander who’s widely respected in the Navy, explains what’s unique about his service: Sailors fight from a platform that can be rocked by hurricanes and typhoons and sunk by missiles from above or torpedoes below. He quotes Pericles’s admonition: “Seamanship . . . is so exacting as to leave leisure for nothing else.”

One retired four-star admiral remembers commanding his submarine 200 feet below the savage 1991 hurricane that became known as “the Perfect Storm.” Monster waves would pitch the submarine back and forth 20 degrees; a surge of water pushed it from 200 feet down to the surface in nine seconds. “It takes time to become a mariner,” he says simply. The modern Navy hasn’t always found that time.

The Navy could begin its reset by shelving, for now, the obsession with adding more ships. Each CNO likes to boast about increased ship count, but the unfortunate truth is that the Navy can’t operate the 301 ships it has now, let alone the 355 it wants by 2034. Rather than more ships, it needs more seamanship — and maybe more support from the other services and a bit less insistence on cross-military “jointness” while it rebuilds.

The Navy’s recent troubles began in the Pacific with a long-running scandal involving a company called Glenn Defense Marine Asia, run by a Malaysian man named Leonard Glenn Francis — known as “Fat Leonard” because of his girth. He supplied equipment and services to the 7th Fleet in the Pacific and, starting in the early 2000s, he began catering to the needs and whims of senior Navy officers who could give him business.

A captain who liked to play golf would be treated to elaborate golf outings; an admiral who liked whiskey would receive bottles of the priciest double-malt scotch; a commander who wanted female companionship would get it — all in exchange for business. Francis “would study Navy officers and target their vulnerabilities,” explains a retired admiral.

Too many Navy officers succumbed. Federal prosecutors filed charges against 17 Navy officials, including 10 commissioned officers. Several dozen more officers were investigated but not charged. They escaped conviction but their careers were over. “There has been significant impact in flag ranks” from the Fat Leonard fallout, says Gilday. “We’ve lost some really good people.”

A former chairman of the Joint Chiefs puts it bluntly: “The Navy was decapitated by Leonard. It lost a generation of officers.”

The Pacific fleet was rocked again in 2017 by two collisions at sea that raised basic questions about the professional competence of officers and sailors. On June 17, 2017, the destroyer USS Fitzgerald collided with a cargo ship off the Japan coast; seven sailors drowned in their quarters. Investigators found later that command supervision was lax and that some younger officers and sailors didn’t know how to use the radar and other advanced systems on which the ship depended.

Disaster struck again two months later, on Aug. 21, 2017, when the destroyer USS John S. McCain steamed into a giant oil tanker off the coast of Singapore, resulting in the deaths of 10 sailors. Again, lack of training and proficiency was part of the problem. It turned out that officers had been trying to warn top Navy commanders for several years that the Pacific fleet, understaffed and inadequately trained, was heading for disaster, according to a ProPublica investigation.

“After the two collisions in 2017, we asked: ‘Are we building the right values? What can we do better than in the past?’ ” Gilday told me. The Navy revamped its training and tried to inculcate what Gilday describes as “fearless communication” up the chain of command. The goal: “We need a tougher, more resilient sailor than what we saw in those two collisions.”

The Navy’s troubles continued, compounded by political interference. Commanders knew a decade ago that the Navy SEALs had become too famous for their own good, and that discipline was eroding. The SEALs were deployed almost constantly in the brutal killing zones of Iraq and Afghanistan, and senior officers tried to weed out those who committed ethical violations. But the force was exhausted and overwhelmed.

The SEAL crisis hit the breaking point with the case of Eddie Gallagher, a Navy chief petty officer convicted of a war crime in 2019 after circulating a photo of himself with the corpse of an Islamic State prisoner killed in Iraq. The Navy tried to maintain its disciplinary standards with Gallagher; Gilday, just appointed CNO, recommended that he be retired at a lower rank. But Gallagher’s lawyers mounted a campaign for him on Fox News, and Trump intervened to countermand the Navy’s decision.

The outcome was devastating for the Navy, which had been trying to rebuild character within the SEALs by encouraging younger members to report abuses by exhausted, undisciplined warriors like Gallagher. “Your character is like any other muscle,” explains a retired admiral who helped oversee the Gallagher investigation. “If it is constantly stressed, it’s going to get fatigued.”

The Crozier incident was one more fireball for the Navy. Crozier was relieved in April after he sent a desperate email about the situation on board his ship to fellow Navy aviators, without first informing the commander of the Theodore Roosevelt’s strike group, his immediate superior. Gilday initially balked at ousting Crozier, favoring an investigation first, but Modly, the acting Navy secretary, wanting to anticipate Trump’s wishes, fired Crozier — and then stepped down himself.

It was a messy situation, and reinforced concern that Gilday wasn’t acting forcefully as the Navy’s uniformed leader. Gilday eventually removed Crozier in June, concluding after a careful inquiry that the captain hadn’t adequately taken care of safety onboard — seeking emergency help from the aviator community rather than staying within his chain of command.

What’s the best way to fix a Navy that has been so damaged by this series of broadsides? Harlan Ulman, a former Navy officer and prominent commentator, wrote recently that the Navy needs a leader like Fleet Adm. Ernest J. King, the famously hard-nosed admiral who ran the Navy during World War II. But the days of the profane, sometimes belligerent King have vanished. A better World War II model would be Adm. Chester Nimitz, a quiet, cerebral officer who commanded the Navy in the Pacific and took it from the aftermath of the disaster at Pearl Harbor to victory.

Can Gilday be the leader the Navy needs? He’s off to a rocky start, but he has time to recover if he takes firm command now. He has the Navy version of a perfect résumé, having worked four times for Adm. Mike Mullen, the former CNO and chairman of the Joint Chiefs of Staff. Gilday also worked closely with Gen. Joseph F. Dunford Jr., a former Joint Chiefs chairman, who named Gilday head of the joint staff and recommended him as CNO. Despite misgivings from some top admirals, Gilday was appointed by Richard Spencer, a widely respected Navy secretary who was ousted by Trump as part of the Gallagher affair.

The Navy is hurting now, and it needs strong, sustained leadership. If Gilday has a normal tour, he probably has three more years at the helm. That should be time to fill the wardroom with a team of trusted officers, take the bridge and get the Navy moving, at flank speed.