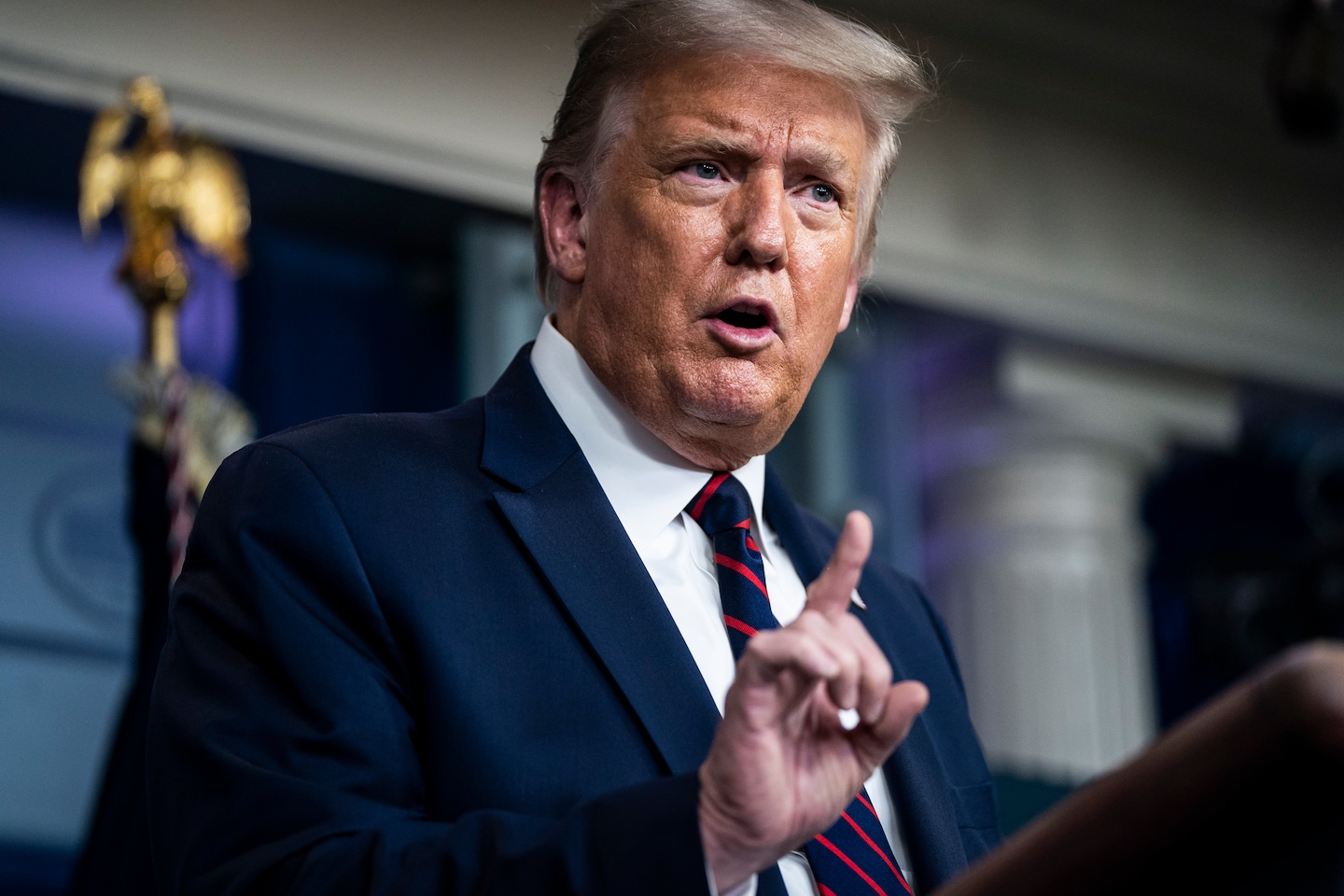 That extra $600 in aid — sometimes called “enhanced unemployment” or “the unemployment bonus” — has become a major sticking point in negotiations about another big aid package. Congress put the extra $600 in place in late March. Lawmakers have known for months that it would expire at the end of July. Democrats want to extend it through the end of the year. Republicans initially proposed reducing it to $200, although the White House has recently signaled that it would agree to a $400 weekly payment.

Republicans say $600 is so high that people are opting to stay home and collect unemployment instead of going back to work. Democrats say that there aren’t nearly enough jobs for everyone who is unemployed and that it’s better to keep families out of poverty and boost the economy by providing plenty of financial support.

Republicans are correct that many people were receiving a higher wage from unemployment than they did at their jobs, but there is little evidence that the extra $600 was dissuading people from returning to work, according to five studies. What the evidence shows is that the extra money has kept many families out of poverty during the pandemic and provided a stimulus to the overall economy as people have spent the aid money.

Most economists surveyed last week by The Washington Post overwhelmingly urged Congress to quickly extend unemployment aid and were baffled why lawmakers had not acted. Some supported extending the full $600, while others said it should be reduced slightly, to $300 or $400. Many suggest that a compromise could be to keep the $600 in place as long as unemployment remains above 10 percent and then reduce the amount as the unemployment rate decreases and job opportunities rebound.

Treasury Secretary Steven Mnuchin and other Republicans have frequently cited a University of Chicago study that found 68 percent of eligible unemployed workers would make more on enhanced unemployment than they did at their jobs. But the authors of that study told The Post they found no evidence that the extra money was dissuading people from working, and they encouraged Congress, especially Republicans, to act quickly on more aid of about $400.

Below is a rundown of how the nation got into this predicament and why so many economists are calling for Congress to extend the amount in the range of $400 to $600.

Why did Congress initially pass $600 in March?

When Congress passed the $2 trillion relief package in late March known as the Coronavirus Aid, Relief and Economic Security (Cares) Act, it was clear much of the economy needed to shut down temporarily to try to stop the spread of the deadly coronavirus. That was going to mean millions of Americans losing jobs through no fault of their own.

Lawmakers wanted to replace the lost wages — to make people financially whole. Median weekly pay in the United States is $1,000, meaning half of workers earn more and half earn less. In normal times when someone loses their job, they can apply to their state government to receive an unemployment payment that’s about 40 to 45 percent of their prior earnings, according to the National Employment Law Project, although that does not take into account benefits like health care or retirement money. The federal government opted to add $600 a week to ensure that the average worker had a 100 percent wage replacement.

Why did the amount get cut at the end of July?

Many in Congress thought that the coronavirus would be largely under control by the summer and that the economy could reopen safely again. This was the prevailing thinking in March when Congress passed the Cares Act and is why so much of the aid for the unemployed as well as small (and large) businesses was set to expire around Aug. 1.

How big is a typical unemployment check from the government?

In normal times, the average unemployed worker gets $333 a week in state government aid, according to the Center on Budget and Policy Priorities. But the amount varies greatly by state (it ranges from $101 in Oklahoma to $531 in Massachusetts). For years, there has been a push to lower the unemployment benefits to encourage laid-off workers to quickly find a new job.

Now that the extra $600 federal government aid has expired, unemployed Americans are back to receiving solely state aid.

How many people are affected by the cut in benefits?

According to the Labor Department, 31.3 million Americans were receiving unemployment aid in mid-July, the latest available data. That means about 1 in 5 workers who had a job before the pandemic are unemployed.

A bipartisan group of economists who worked for Presidents Barack Obama and George W. Bush recently proposed that Congress extend the unemployment “bonus” at $400 a week. That would replace the wages of most non-white-collar workers. This recession has hit low-income restaurant, retail and other service-sector workers the hardest. Their typical weekly paycheck is $625, so they should be fully covered.

The White House floated $400 on Tuesday, but Democrats in Congress rejected it.

Who’s to blame for aid getting cut?

Democrats passed a $3 trillion relief package on May 15 that included extending the $600, but Trump and Senate Republicans dismissed it. Republicans made a counter proposal on July 27 for a $1 trillion package of additional aid — just as the extra relief for the unemployed was expiring. The GOP plan calls for workers to receive 70 percent of their prior wages starting in October and a $200 per week bonus until then.

Many economists say there’s merit to the idea of trying to replace a certain percent of a worker’s prior wage. The problem is that the government has to make an individual calculation for each worker. It’s a lot of work and would take time to implement because it hasn’t been done before.

The National Association of State Workforce Agencies warned Congress that it would take most states eight to 20 weeks to set up this new program to attempt 70 percent wage replacement. State unemployment offices have been overwhelmed by the millions of unemployment claims in recent weeks.

What does the “Chicago study” that Republicans often cite say?

Republicans have frequently pointed to a study by three economists at the University of Chicago’s Becker Friedman Institute that was published May 14 and found that two-thirds of eligible unemployed workers would receive more on unemployment than they did in their job. They found that the typical wage replacement rate was 134 percent. The study did not look at whether this is dissuading people from going back to work.

In a June op-ed, the authors of the Chicago study advocated for Congress to refine the unemployment formula after the $600 expired. Their proposal was to have the federal government reimburse about 45 percent of a worker’s prior pay (which would then be added to the roughly 40 percent a worker already received from the state). The idea was to cover most of the prior wages.

Now these economists say Congress has waited too long to act and must use a simpler solution to get the money out quickly.

“Let’s get the typical worker to about 100 percent wage replacement. A $400 federal supplement would do that,” said Joseph Vavra, an economics professor at the University of Chicago Booth School of Business.

There are business owners who say that they tried to rehire their former employees and that the workers told them they would rather stay home and keep receiving unemployment. There are posts on social media sites such as Reddit where some people talk about how “the past 4 months have been the happiest time of my life” because they have been earning more money on unemployment.

Although some of these stories may be true, unemployed workers lose benefits if they refuse to take a job they are offered. Every week, unemployed workers have to log on to their state Web portals and fill out forms certifying that they haven’t found a job. If their prior employer tells the state they tried to rehire the worker and they wouldn’t return, that worker is supposed to lose benefits.

“I found no evidence of any effect on labor market flows from more generous UI in May and June,” he said. “There’s no relationship between UI generosity and labor market outcomes so far.”

What does all of this mean for the unemployed?

Right now, there are 5.4 million job openings and 31 million people on unemployment aid. There aren’t enough jobs for people who need them, and unemployment aid has been cut back sharply.

Most unemployed workers received their last $600 “bonus” more than a week ago. Congress and the White House say they are trying to reach a deal this week and pass a bill next week. It will take time after that for states to implement whatever Congress passes, meaning that late August would be the earliest a higher payment would reach the unemployed.

Can Trump use an executive order to extend benefits?

Trump has threatened to use an executive order to extend some sort of aid if Congress can’t reach a deal this week. The Constitution gives Congress the authority on spending. Because this would require additional spending, it’s difficult to see how an executive order would be legal. If Trump tried it, it probably would lead to legal challenges, which could further delay payments to the unemployed.

What about gig workers and the self-employed?

Gig workers and the self-employed will continue to be eligible for state unemployment benefits through the end of the year, but they also lose the $600 bonus.

In normal times, gig workers and the self-employed do not qualify for unemployment aid, but Congress made an exception in the Cares Act.

What about parents who need to watch their kids?

Parents who are forced to leave a job to take care of their children while schools or day-care centers are closed are supposed to qualify for pandemic unemployment aid. This was approved in the Cares Act and is supposed to continue through the end of the year.