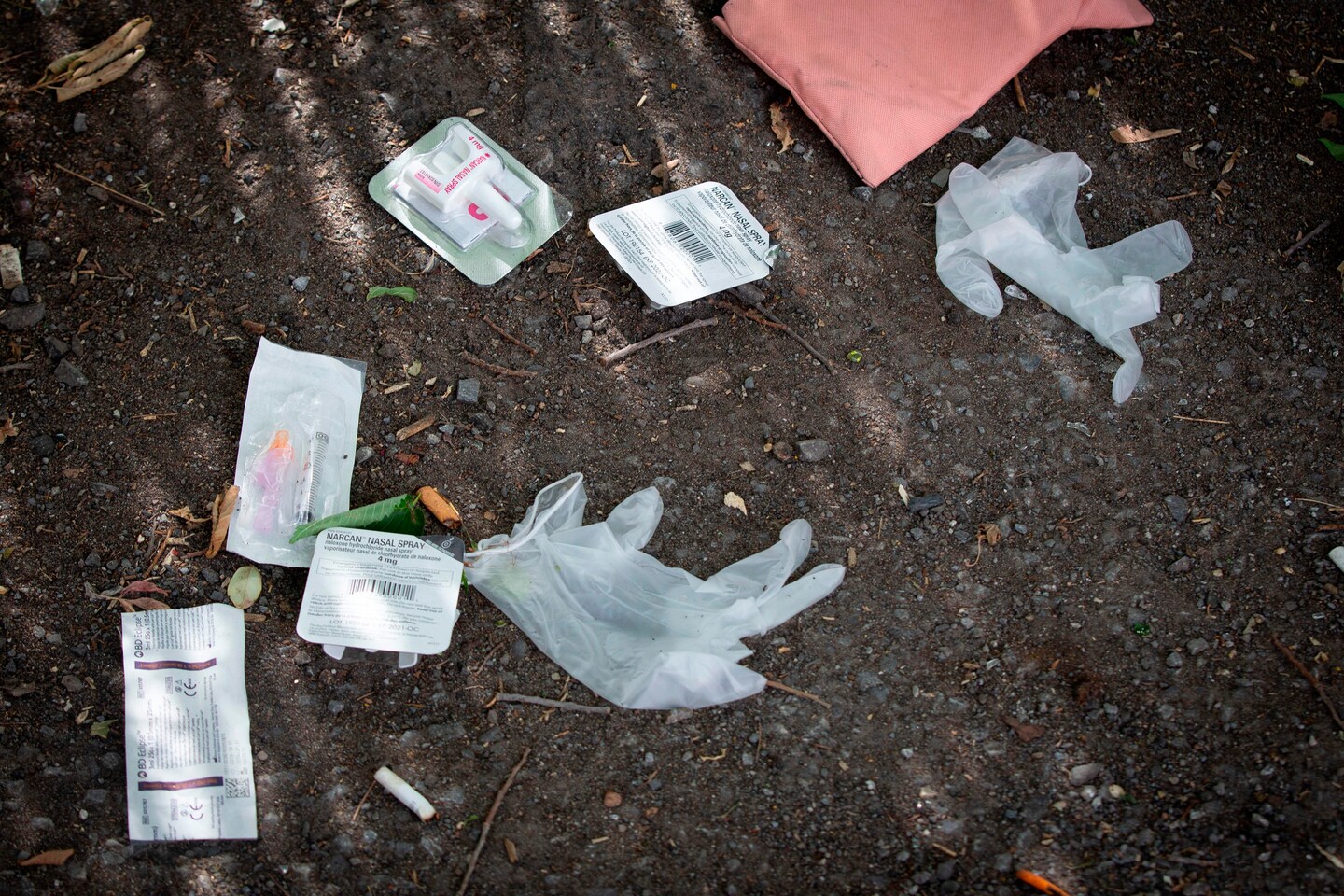 Ryan Krell had died of an accidental drug overdose — another life lost to a crisis that has killed more than 15,400 people in Canada since 2016. Their number has increased in the shadow of the coronavirus pandemic — and perhaps, officials say, because of it.

Now a growing chorus, including top public health officials, the premier of British Columbia and the nation’s police chiefs, is calling on Prime Minister Justin Trudeau to decriminalize the possession of illicit drugs for personal use.

It’s a shift Krell supports — even if it would come too late for her brother.

“Our lives are forever changed,” she said. “And you’re left with all of the what-ifs.”

Given the differences in how provinces release data, it could be months before a full understanding of overdoses during the pandemic emerges. But many parts of Canada have already marked grim milestones.

British Columbia, the epicenter of the crisis, recorded its deadliest month in May — and then surpassed it in June. Nearly four times as many people in the province have died of a suspected overdose this year as have died of the coronavirus.

Overdose deaths in the Yukon territory this year are double last year’s tally. Paramedics in the city of Saskatoon last month responded to a record weekly number of overdose calls.

“These are our brothers and sisters, and many young men in my life that I worry about,” she told The Washington Post. “I knew that things were being challenged. . . . But it just really took my breath away that that many families, that many people were being affected when we had been making progress.”

Border closures have disrupted drug markets, making the street supply more unpredictable and toxic. Authorities have urged people to stay at home, pushing some to use drugs alone, without anyone nearby to help when dosages go wrong. Some supervised consumption sites and treatment centers have reduced operations, cutting people off from support networks.

The Overdose Prevention Society in Vancouver operates a supervised consumption site that is visited by as many as 700 people a day. When the pandemic hit, said Executive Director Sarah Blyth, she had to limit the number who could use the indoor space.

All of these factors coalesced with deadly consequences for Ryan Krell.

Shannon Krell said her brother used crystal meth. In May, she asked police to pick him up under a provincial law that allows authorities to take people involuntarily for mental health treatment if they pose a risk to themselves or others.

He was suffering drug-induced delusions and taken to a Vancouver hospital, where he expressed a willingness to enter treatment. His family said they would spare no expense to help; members urged the hospital not to discharge him until they found a treatment facility.

But one facility was closed for the pandemic. Another required patients to self-isolate for five days before they could be admitted. Ryan was discharged.

He died a few days later, on May 19. His drugs had been cut with fentanyl.

Ryan had been working as an IT specialist for Vancouver’s regional health authority. In an online memorial, colleagues said he played a key role in the coronavirus response.

What has been particularly “hard to watch,” Shannon Krell said, is the contrast in Canada’s responses to the parallel health emergencies.

For the pandemic, officials have marshaled extraordinary financial resources and provided daily updates. Lawmakers have stood side-by-side with public health officials, largely deferring to their advice.

But they’ve not always backed the remedies those same officials have offered to fight overdoses.

“That’s not to say we shouldn’t respond to covid,” Krell said. “We absolutely should. . . . But if this was any other health issue and people were dying this way, there would be a response.”

Donald MacPherson, executive director of the Canadian Drug Policy Coalition, which pushes for an end to drug prohibition, said the discrepancy is rooted in the shame and stigma society associates with illicit drug use.

“It really does say that some lives matter more than others,” he said.

Reducing that stigma is one reason that Henry, the health officer for British Columbia, and some of her counterparts have long prescribed decriminalization. They say punitive drug policies don’t address what is ultimately a public health issue.

“The most important thing we can do is make it okay for people to talk about their drug use and to seek assistance for it,” Henry said. “Labeling somebody a criminal is one of those major barriers that keeps people hiding and afraid and ashamed.”

Henry has earned national praise for her handling of the pandemic. But when she released a report last year recommending decriminalization, lawmakers dismissed it.

That followed an extraordinary endorsement from the Canadian Association of Chiefs of Police, which said police resources would be better spent on cracking down on drug trafficking, illegal production and importation than on pursuing users.

The chiefs said that arresting people for simple possession has been “ineffective” and that police should instead direct users to ­social services and health care, which could reduce recidivism and ancillary crimes.

Canada, which in 2018 legalized cannabis for recreational use, has been more receptive to a harm-reduction approach to overdoses than the United States. Research shows it helps prevent disease and keeps people alive so they potentially can be steered into treatment.

Trudeau’s government has increased access to the overdose-
reversal medication naloxone, approved dozens of supervised consumption sites and passed a “good Samaritan” law that protects people from possession charges if they call 911 for an overdose.

British Columbia has been a pioneer. Its Crosstown Clinicin Vancouver gives pharmaceutical-grade heroin to patients for whom other types of treatment have proved ineffective. It says it was the first facility in North America to do so.

Provincial officials, fearing a resurgence of overdose deaths during the pandemic, altered guidelines in March so doctors could prescribe some patients a take-home “safe supply” of drugs such as methadone and the opioid hydromorphone, to reduce the use of contaminated street drugs.

Advocates say the measures have been effective, but are difficult to scale and have been inaccessible for some. Rupinder Brar, an addiction medicine doctor in Vancouver, said some physicians who are inexperienced in managing substance-use disorders have been reluctant to prescribe the drugs.

Trudeau’s Liberal government has provided some funding for safe-supply pilot projects, but it has been noncommittal on decriminalization. Some Conservative governments have defunded safe-consumption sites, saying they legitimize and enable drug use.

Trudeau told the Canadian Press last year that decriminalization was not a “panacea.” A spokesman for Health Minister Patty Hajdu did not respond directly to questions about decriminalization, but pointed to the government’s harm-reduction measures.

“Problematic substance use is a health issue,” spokesman Cole Davidson said this week. “That is why the actions we have taken to date have focused on advancing a public health approach to addressing substance use and expanding the accessibility of vital health and social services for people who use drugs.”

Some harm-reduction advocates say they face criticism for their work. Christy Sutherland is medical director at the Portland Hotel Society, a Vancouver nonprofit organization.

“I’ll be at a party and say, ‘I work at a supervised consumption site,’ ” she said. “And people will just say casually, ‘I think if people overdose, we should let them die.’

“I just don’t know how someone could think that about another human being.”

Petra Schulz has taken action, co-founding Moms Stop the Harm, a support group for people who have lost loved ones to drug overdoses. She said the group has seen a “steady” increase in new members during the pandemic.

What has been “really frightening,” she said, is that many victims had been in recovery and appeared to have “turned the corner” before relapsing.

Morgan Goodridge is one of them.

His mother, Kathleen Radu, said her firstborn was an athletic child who “lit up a room.” He’d been to an addiction treatment center on Vancouver Island in 2018 after an infection from ­heroin needle use nearly killed him.

When she saw him in early June during a celebration for his 26th birthday, he had been clean for five months. There was “a light in his eyes that he hadn’t had before,” she said.

Goodridge died a week later, on June 16, after taking drugs tainted with fentanyl.

“It’s a call no parent ever, ever wants to receive,” Radu said. “It plummets you into the darkest abyss.”

She believes decriminalization would have lessened the shame and stigma her son felt about his drug use.

She, too, spoke of the difference in responses between the dual health crises.

“On one side, we have money, resources, and we’ve seen success in flattening the curve,” Radu said. “On the other side, we have no immediate action . . . and all we’re seeing are record numbers.

“Why isn’t this something that’s on the tip of everybody’s tongue? Why aren’t people outraged?”