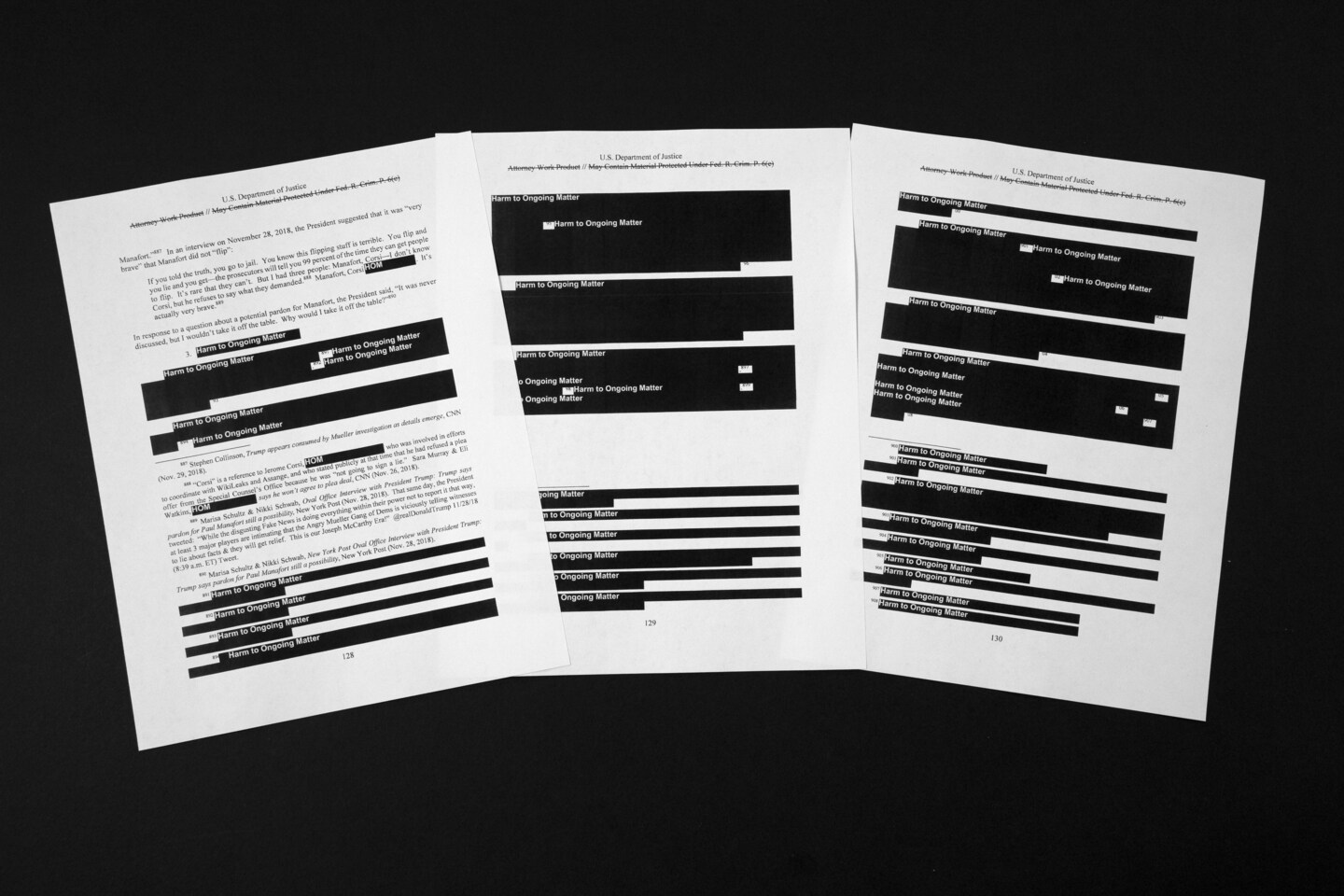 Yet those same defenders wave away as unrelated to the campaign direct evidence of interactions between active participants in Trump’s campaign and Russian interests. That then-campaign Chairman Paul Manafort met with an associate believed to have been tied to Russian intelligence to share polling data is waved away as coincidental or unimportant — certainly nothing encompassing Trump himself.

On Tuesday, the effort to draw this tenuous distinction was significantly hobbled by a new report from the Republican-led Senate Intelligence Committee. The report documents previously unidentified connections between Trump’s team and Russia’s interference efforts, connections that are loosely drawn but which hint at direct involvement of Trump’s senior team with Russia’s most obvious and immediate attempts to swing the results of the presidential contest.

“Manafort hired and worked increasingly closely with a Russian national, Konstantin Kilimnik,” the report states, referring to a business partnership that predated Manafort’s joining the campaign and often centered on work Manafort did for Russian oligarchs. “Kilimnik is a Russian intelligence officer. … Kilimnik and Manafort formed a close and lasting relationship that endured to the 2016 U.S. elections and beyond.”

That the report unequivocally states that Kilimnik is an intelligence officer — someone who is part of a “cadre of individuals ostensibly operating outside of the Russian government but who nonetheless implement Kremlin-directed influence operations” — is, by itself, a significant new finding. Kilimnik was understood to have been connected to Russian intelligence; here, the committee asserts without qualification that he was acting at times on the Kremlin’s behalf.

So how did the Manafort-Kilimnik bond manifest in 2016?

“On numerous occasions, Manafort sought to secretly share internal Campaign information with Kilimnik,” the report continues, echoing past findings about the pair’s relationship. “The Committee was unable to reliably determine why Manafort shared sensitive internal polling data or Campaign strategy with Kilimnik or with whom Kilimnik further shared that information. The Committee had limited insight into Kilimnik’s communications with Manafort and into Kilimnik’s communications with other individuals connected to Russian influence operations, all of whom used communications security practices.”

“The Committee obtained some information suggesting Kilimnik may have been connected to the GRU’s hack and leak operation targeting the 2016 U.S. election,” the report states.

The GRU is Russia’s Main Intelligence Directorate, its military intelligence agency. The group has been directly implicated in illegally accessing the Democratic National Committee’s network in early 2016 and accessing an email account belonging to Hillary Clinton’s 2016 campaign chairman, John Podesta. That material was then conveyed to WikiLeaks, which published it in July and October of that year.

Until the Senate report, connections between that hacking — tied tightly to Russian efforts by the investigation led by former special counsel Robert S. Mueller III — and Trump’s campaign team were indirect. Trump’s longtime adviser Roger Stone seemed to have direct knowledge of what WikiLeaks possessed and was reported to have given Trump and his team a heads-up on what to expect. But there wasn’t a direct line from the hack to Trump’s team.

The Senate report suggests that there may have been one: Russian intelligence to Kilimnik to Manafort, who, again, was running the show for most of the summer of 2016.

At one point, the report identifies three apparent ways in which they came to believe Kilimnik was linked to the hacks, all of which are redacted.

“While this information suggests that a channel for coordination on the GRU hack-and-leak operation may have existed through Kilimnik,” it reads, “the Committee had limited insight into Kilimnik’ s communications with Manafort and [REDACTED], all of whom used sophisticated communications security practices.”

At another point, those practices are detailed. They included the use of encrypted communications applications and sharing an email account allowing information to be shared in draft emails but not sent publicly over the Internet where it might be tracked.

The report suggests that Manafort himself might have been tied to the GRU operation.

“As noted above, however, the content of the majority of the communications between Manafort and Kilimnik is unknown,” it continues. “Some of these communications involved in-person meetings; no objective record of their content exists. Two pieces of information, however, raise the possibility of Manafort’s potential connection to the hack-and-leak operations.”

Those pieces of information are redacted.

As has been established elsewhere, Manafort repeatedly shared internal campaign material with Kilimnik, including during a meeting in New York City on Aug. 2, 2016.

“At the meeting, Manafort walked Kilimnik through the internal polling data from [Trump campaign pollster Tony] Fabrizio in detail,” the report states. “According to [Manafort business partner and campaign deputy chairman Rick] Gates, Kilimnik wanted to know how Trump could win. Manafort explained his strategy in the battleground states and told Kilimnik about polls that identified voter bases in blue-collar, democratic-leaning states which Trump could swing. Manafort said these voters could be reached by Trump on issues like economics, but the Campaign needed to implement a ground game. Gates recalled that Manafort further discussed the ‘battleground’ states of Michigan, Wisconsin, Pennsylvania, and Minnesota.”

The Senate committee never determined why Manafort shared the data with Kilimnik.

“Manafort and Gates both claimed that it was part of an effort to resolve past business disputes and obtain new work with their past Russian and Ukrainian clients by showcasing Manafort’s success,” the report states. “[N]o direct evidence supports this conclusion,” it reads at another point, referring to Gates’s claims to that end.

The report also outlines the extent to which Stone was representing himself as connected to WikiLeaks. It was reported that Stone had apparently informed the Trump campaign about the imminent release of WikiLeaks material in mid-July. The report documents the extent to which Trump and his team saw Stone as a conduit to the group.

“Beginning in April or May 2016, Roger Stone repeatedly conveyed to Trump and senior Campaign staff that WikiLeaks would be releasing information damaging to Clinton,” the report reads. “After the July 22 WikiLeaks release, Trump and senior Campaign officials believed Stone had access to nonpublic information about WikiLeaks’ s ability and intent to release emails harmful to Clinton. Thereafter, Trump directed Campaign officials to stay in touch with Roger Stone about future WikiLeaks activities regarding Clinton-related emails. Manafort in turn tasked Stone to contact Julian Assange, and Stone endeavored to reach Assange through several intermediaries.”

By the time of the first releases of material, it was already understood that the documents had almost certainly been stolen by Russian hackers. That Stone was asked to focus on WikiLeaks’s releases also reintroduces significant questions about Trump’s claim to Mueller’s team that he didn’t remember whether he and Stone had discussed WikiLeaks.

The report is appended with notes and questions from members of the committee. Here, the bipartisan nature of the report collapses. Republican senators, including Sen. Marco Rubio (R-Fla.), pointedly assert that “[a]fter more than three years of investigation by this Committee, we can now say with no doubt, there was no collusion.” This claim was reiterated by Rubio on Twitter.

Senate Democrats, for their part, disagree.

Emphasis in the original. That there remains uncertainty, of course, is in part a function of the extent to which Manafort and Kilimnik covered their tracks, the same obstacle Mueller himself documented.

“Collusion” was always an eye-of-the-beholder term, one used either to describe only provable coordination (by Trump defenders) or broad interactions between Russian actors and Trump’s team (by his critics). What the Senate report suggests, though, is the possibility of a much more direct line from Russia’s efforts to Trump’s inner circle.

Trump on Tuesday morning reiterated the point he would like to remain the focus of the Russia discussion: that intelligence agencies “spied on his campaign” in 2016. The Senate Intelligence Committee report, released by the committee’s Republican majority, reinforces that there was, in fact, reason to be suspicious both of Russia’s efforts and of individuals linked to the campaign.

The president’s defenders will certainly wave this away as unsubstantiated and/or related solely to Manafort’s own actions. They will also then insist that similar limits on scope not apply to the allegations they would like to highlight.