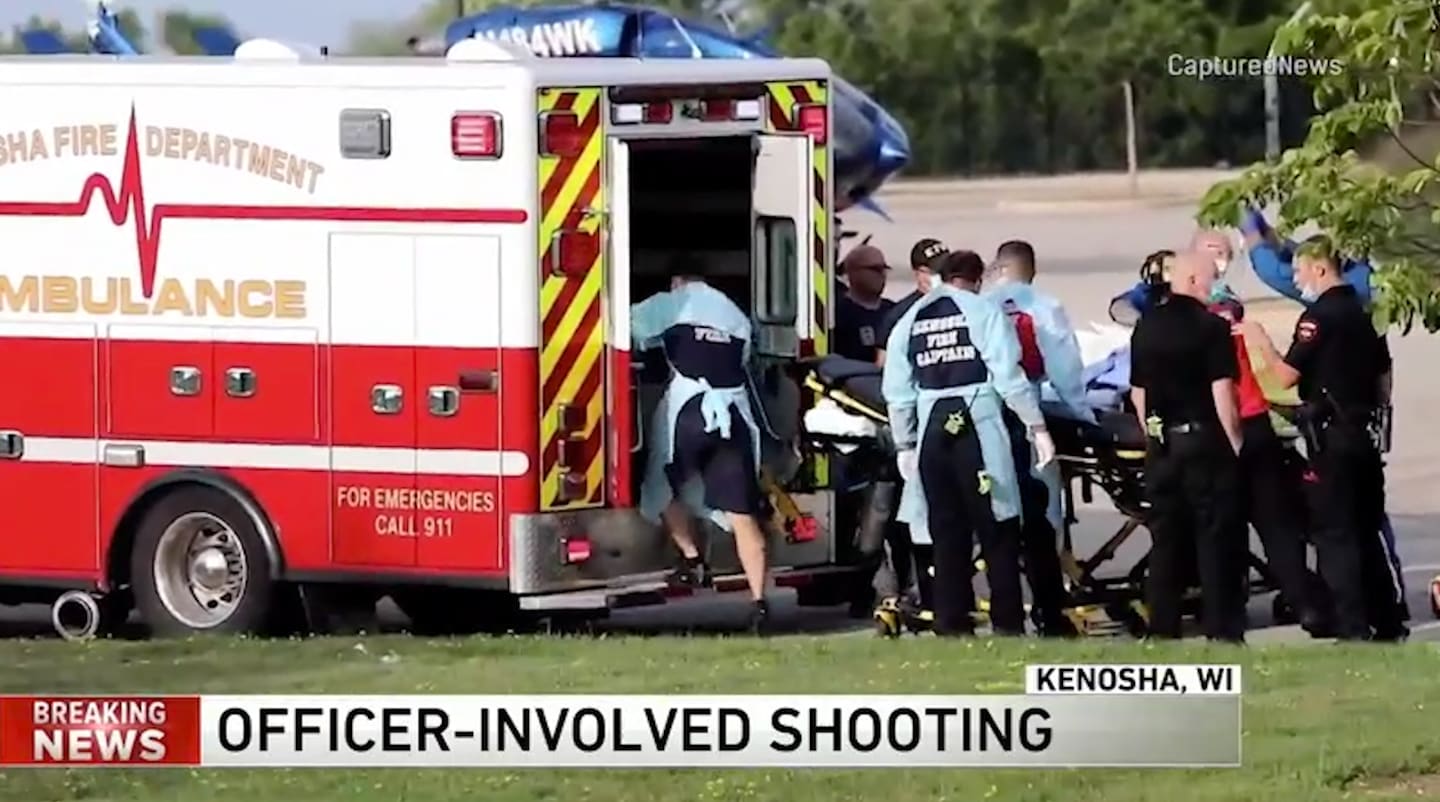 Blake, 29, was shot at least seven times in the back as he tried to get into a car in which his three children were seated. He underwent surgery and is in serious condition in the intensive care unit of a Milwaukee hospital, officials said. The officers were placed on administrative leave, but protests rocked the city, which was placed on a curfew that extended into Monday morning.

LeBron James was one of several athletes who shared an old video of actor Denzel Washington asking, “Is the sheep preaching hate when he says I’m not going to let a wolf eat me anymore?”

That was retweeted by Kansas City Chiefs safety Tyrann Mathieu, who also tweeted: “Damn they shot that man 7 times … why can’t 3 officers subdue one male? I truly need answers y’all comment on everything else.”

“Quite frankly, it’s just f—ed up in our community,” James said. “We are scared as Black people in America. Black men, Black women, Black kids, we are terrified. You have no idea how that cop left the house. You don’t know if he woke up on the good side of the bed or the wrong side of the bed. You don’t know if he had an argument at home with his significant other or one of his kids said something crazy and he left the house steaming. Maybe he just left the house saying, ‘Today is going to be the end for one of these Black people.’ That’s what it feels like. It just hurts.”

James added that “guns are a huge issue in America.”

“They’re not just used for hunting, like a lot of people do for sport,” he said. “For Black people right now, when you’re hunting, we think you’re hunting us.”

Utah Jazz guard Donovan Mitchell, whose team is playing the Denver Nuggets in an NBA playoff series, also took to Twitter. “F THE GAMES AND PLAYOFFS!!! THIS IS SICK AND IS A REAL PROBLEM WE DEMAND JUSTICE!” he wrote, adding, “THIS IS WHY WE DONT FEEL SAFE!!!!”

Kenny Stills, the Houston Texans wide receiver who has knelt during the national anthem for several seasons, tweeted, “Tired of waking up to videos of people being gun downed by the police.” Stills was among 87 protesters recently arrested as they demanded justice for Breonna Taylor outside the home of Kentucky Attorney General Daniel Cameron.

In Wisconsin, pro teams were unified in their reaction. Brewers pitcher Devin Williams scratched out “BLM” in the dirt on the mound in Milwaukee.

The Milwaukee Bucks, for whom the unlawful arrest of forward Sterling Brown in 2018 still resonates, said the organization stands “firmly against reoccurring issues of excessive use of force and immediate escalation when engaging the Black community. Our organization will continue to stand for all Black lives as we demand accountability and systemic change on behalf of George Floyd, Breonna Taylor, Sylville Smith, Ernest Lacy, Dontre Hamilton, Tony Robinson, Joel Acevedo and countless other victims. We will work to enact policy change so these incidents no longer exist.”

Speaking to reporters from the NBA playoffs in Kissimmee, Fla., Bucks guard George Hill said, “We shouldn’t have even came to this damn place, to be honest. I think coming here just took all the focal points off what the issues are.”

The Green Bay Packers also released a strong statement on the incident: “While we understand a full investigation of this terrible incident will take place, we are deeply troubled at what again has become a painful example of the significant challenges we face with respect to police brutality, systemic racism and injustices against Black people. We continue to call for meaningful dialogue to affect the needed change we all desire.”

Oklahoma City Thunder star Chris Paul chose to address the shooting rather than his team’s victory over the Houston Rockets on Monday night and challenged athletes to get “our entire teams registered to vote” Nov. 3.

“I just want to send my prayers out to Jacob Blake and their family,” he said. “The things we decided to come down here to play for, and we said we’re going to speak on the social injustice and the things that continue to happen to our people. It’s not right. It’s not right.

“So the win is good, but voting is real. I’m going to challenge all my NBA guys, other sports guys: Let’s try to get our entire teams registered to vote. There’s a lot of stuff going on in the country. You know, sports — it’s cool, it’s good and well, that’s how we take care of our families. But those are the real issues that we’ve got to start addressing.”

The shooting happened when officers responded to a domestic incident, police said. Witnesses told the Kenosha News that Blake was trying to break up a fight and that police first attempted to stun him with a Taser. Video shows people gathering outside as two officers with guns drawn follow Blake as he approached the car. As he opened the driver’s side door, an officer grabs his white tank top and multiple shots are fired.

Saints running back Alvin Kamara called the incident “attempted murder” and added, “I pray he survives.” Saints defensive end Cameron Jordan questioned the amount of force used, tweeting: “3 officers, 1 male? And the only way to subdue 1 man was to fire 7 rounds …”

New York Mets pitcher Marcus Stroman tweeted: “Prayers up for Jacob Blake. If you watch that video and don’t see the problem…then you’re part of the problem. No body cam footage. Unarmed black man. Thank god for the video from across the street. Open your eyes people. Try a little empathy. This s— is sickening!”