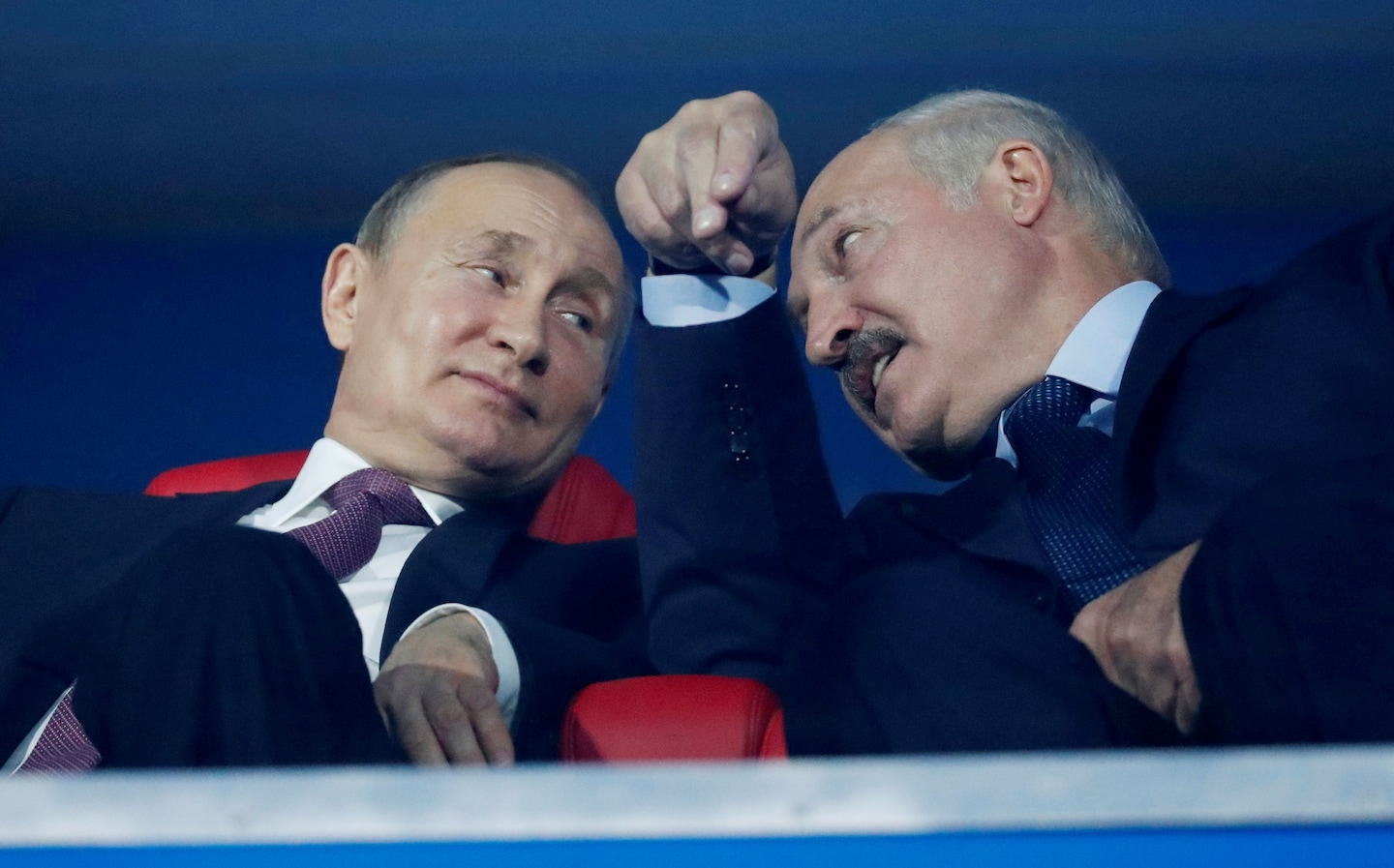 Russia had been lukewarm in its recent endorsements of Lukashenko, who has ruled Belarus since 1994. But Putin’s statement of support Thursday perhaps revealed Moscow’s thinking that keeping him in power is also the way to keep the country in its orbit.

The threat of military involvement could inflame tensions between Russia and Europe, which has sided with protesters who say the official election results showing Lukashenko winning easily were false.

Putin’s response, according to Kremlin readouts of the talks, was to tell all three that external interference in Belarus is “unacceptable.” Then during a surprise 20-minute interview on state television Thursday, Putin said Lukashenko “asked me to form a certain reserve of law enforcement officers, and I did it.”

“But we also agreed that it will not be used until the situation gets out of control and until extremist elements, under the guise of political slogans, cross certain borders — start looting, start setting cars, houses and banks on fire, seize administrative buildings and so on,” Putin said, adding that “there is no such need now, and I hope there will be no such need.”

The interview touched on a variety of subjects but did not address the suspected poisoning of prominent Russian opposition figure Alexei Navalny. In another sign of strain between Moscow and the West, calls from the United States and others to investigate what happened to the Kremlin critic have largely been ignored by Russia, which has yet to open a criminal case into the matter.

There have been demonstrations in Belarus every day since Aug. 9, when the 65-year-old Lukashenko claimed he won a sixth term as the country’s president with more than 80 percent support amid widespread accusations of vote-rigging.

Putin and Lukashenko, meanwhile, have had five telephone conversations — they had three all of last year — since the protests started. Lukashenko said that Putin promised military aid in those talks, but that was later clarified by the Kremlin to apply to only an external threat, as outlined in a 1999 agreement that binds Belarus and Russia politically and militarily.

But Putin’s comments Thursday left open the option for Russia to come to Lukashenko’s aid, even if the turmoil there continues to be domestic. A Russian government plane that has previously been used to carry senior government officials, including reportedly the head of the FSB security service, landed in Minsk on Wednesday — its second such trip in just over a week, flight-tracking data showed.

Dmitri Trenin, director of the Carnegie Moscow Center, wrote in a recent commentary that the Kremlin is not wedded to Lukashenko, but “it cannot, however, allow Belarus to follow the path of Ukraine and become another anti-Russian, NATO-leaning bulwark on its borders, and much closer to Moscow. Nor can it allow a rebellion leading to a bloodbath.”

Nigel Gould-Davies, former British ambassador to Belarus and senior fellow at the International Institute for Strategic Studies, wrote on Twitter that there’s only one way to interpret Putin’s message: Russia will step in if Lukashenko is in danger of losing power.

“You know, in my opinion, we are much more balanced and neutral toward the events in Belarus than many other countries — Europe and the U.S.,” Putin said. “We believe that this is primarily a matter for the Belarusian society itself, for the Belarusian people. But we certainly care about what is happening there.”

“I still hope that all of the problems — and, of course, they exist, otherwise people wouldn’t have taken to the street; this is quite obvious — will be resolved within the constitutional field, within the framework of the law and using peaceful methods,” Putin added.

The comments come as main opposition candidate Svetlana Tikhanovskaya has been receiving symbolic support from European Union leaders, who said recently they do not recognize the official election outcome. Lukashenko, in turn, has attempted to smear the opposition by calling it anti-Russian and pro-Western, which Tikhanovskaya and her allies have denied.

Two days ago, she addressed European parliament members from self-exile in Lithuania, saying that the “peaceful revolution in Belarus” is “neither pro-Russian nor anti-Russian, nor is it anti-European or pro-European.”

Putin’s interview Thursday purported to address the “most pressing issues,” and in addition to speaking on Belarus, he touched on the economy, Russia’s handling of the novel coronavirus and the vaccines the country has developed.

But he was not asked about Navalny, who has been comatose since becoming suddenly ill during a flight from Siberia to Moscow.

German doctors treating Navalny in Berlin said Monday that clinical results indicated he was poisoned, a method used in other recent attacks on dissidents linked to Russian agents by Western intelligence officials. Putin spokesman Dmitry Peskov said Tuesday the Germans’ conclusion of poisoning was hasty, and Russia did not see grounds to criminally investigate.

The Russian Interior Ministry’s transport police department in Siberia opened a preliminary inquiry Thursday into the Navalny case, checking the hotel room where he stayed during his trip to Tomsk last week as well as other locations. But “neither strong nor narcotic substances have been found,” the agency’s press service told the Interfax news agency.

“We expect Russia to join efforts to clear up what happened but at the moment that doesn’t seem to be the case,” German Foreign Minister Heiko Maas told ZDF television Thursday.

“We, [European Union] foreign ministers, will discuss this today because it would be easiest for Moscow to join the investigation, otherwise the question remains open and then the E.U. will have to discuss how to proceed,” he added.