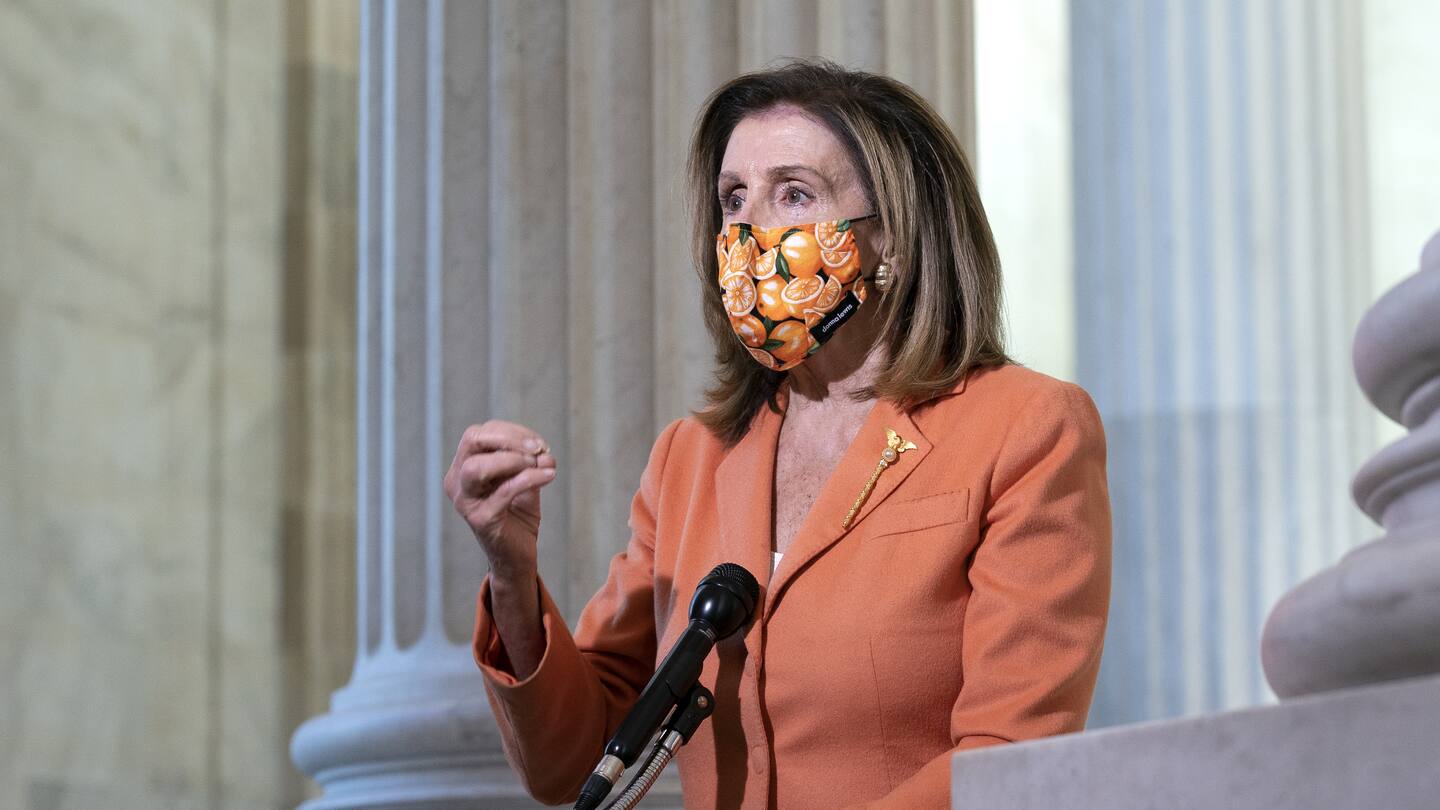 Yet as Pelosi has repeatedly batted down offers from the White House, arguing that they are not good enough and will not address the needs of the American public, some Democrats are urging her to make the long elusive deal. She has pressed her case in private calls, referring to a recent White House offer as a “slush fund” that the president could use to his own political advantage, according to two Democrats on calls with her. Her argument is that the White House could try and use some of the money based on Trump’s wishes and not Congress’s intent.

Still, there is a growing concern that if the speaker doesn’t say yes to something soon, voters could have to wait months for financial assistance and the economy could deteriorate precipitously during that span.

“When families and businesses are hurting, and it looks like we have to wait until February for action, we simply can’t dismiss any help out of hand,” said Rep. Josh Gottheimer (D-N.J.), the leader of the bipartisan Problem Solvers Caucus, who has been encouraging the speaker to do a deal for weeks. “I‘m sure there’s areas for improvement, but we should stay at the table until we can get this across the finish line.”

Pelosi’s stance has politicians on both sides squirming. Just after midnight on Thursday morning, Trump took direct aim at Pelosi’s approach, writing on Twitter that “Nancy Pelosi couldn’t care less about the American People or the great American Worker. She should approve needed STIMULUS now. Most other Dems agree. Republicans are ready to go, I am ready to sign!!!”

The issue is a sensitive subject for the speaker. Politics, she has often argued, has nothing to do with her position, and suggestions to the contrary can infuriate her. On Tuesday evening, for example, the typically poised Pelosi was so angered by CNN host Wolf Blitzer’s suggestions that she was letting “the perfect be the enemy of the good” that she accused him of being an apologist for the GOP who didn’t know what he was talking about.

The issue is also extremely sensitive inside the House Democratic Caucus, where some Democrats want Pelosi to make a deal but are also afraid of calling the powerful speaker out by name.

No one wants to undercut Pelosi’s bargaining hand, and the bulk of the caucus remains strongly supportive of her approach.

Still, with millions of Americans out of work and in increasingly desperate straits, some lawmakers are growing more vocal with their fears about the risks of failing to come to agreement quickly. Congress has not passed a law since April to approve any new economic relief or health care spending for the pandemic, and Democrats fear that if Trump loses the election he’ll be in no mood to bargain.

“I would like to see a deal now,” said Rep. Tom Malinowski (D-N.J.), a freshman lawmaker from a vulnerable district. “And what’s important to me is not the dollar amount, but knowing that the central features like state and local government relief are funded for at least several months because the need is immediate and great.”

At the very least, some Democrats, including Malinowski, argue the House should pass a White House-backed deal and send it to the Senate, where Majority Leader Mitch McConnell (R-Ky.) and Senate Republicans have made clear they have little interest in clearing a big, new spending bill and are focused on filling the Supreme Court vacancy instead.

“My fear is that if Trump loses the election, we’re done until February because he’s not going to be in any mood to help or cooperate with anybody,” Malinowski said.

“If we take the view that we really want to make a deal, we can make a deal,” said another House Democrat, Rep. Ro Khanna (Calif.) — whose views Pelosi dismissed in her CNN interview Tuesday night, saying he was not privy to the particulars of the talks. “My point is just, let’s make sure we don’t go empty-handed.”

The pressure has led Pelosi to go on the defensive this week: On a private call with some of her members on Wednesday, Pelosi assured her colleagues that she was serious about wanting a deal with the White House.

“Why would we even talk to each other if we didn’t want a bill?” she asked, referring to her ongoing conversations with Treasury Secretary Steven Mnuchin, according to a person familiar with her comments who spoke on condition of anonymity to divulge them.

Then, she ticked off a range of problems with the most recent White House offer of a $1.8 trillion package, including the inclusion of liability protections for businesses, a non-starter for Democrats. Other liberal members of the caucus backed Pelosi up, according to people on the call, arguing that the White House plan would hurt the underprivileged.

“We can’t have a deal that goes backwards,” Pelosi told the group.

Some lawmakers worry that Pelosi is refusing to take a deal because of the political ramifications of giving Trump a win, though virtually no Democrat will say that publicly.

It’s an argument Republicans have been making for months. Rep. Tom Reed, the GOP leader of the Problem Solvers Caucus, which released a bipartisan roadmap for a deal several weeks ago, accused Pelosi and Senate Minority Leader Charles E. Schumer (D-N.Y.) of putting political prospects before positive outcomes.

“They’re adamant about not giving the president a win this close to the election because they’re so close to the brass rings of power, be it the White House or the Senate, and they’re willing to make the American people suffered all the way to February… and that’s appalling,” the New York Republican said. “Take the deal, take yes for an answer.”

For Pelosi, there is little upside politically to making a deal she doesn’t want before Election Day. Currently, Republicans are bearing the brunt of voter wrath about Trump’s pandemic response, with House Republicans expected to lose seats in November, according to most political handicappers. Even Pelosi’s most vulnerable House Democrats are doing far better than many imagined they could in the polls, with some pulling in record fundraising hauls.

In the Senate, Republicans are privately worried that they will lose control of the upper chamber. And on the presidential trail, former Vice President Joe Biden is considered the heavy favorite, given Trump’s dismal approval ratings.

Trump, facing down potential political carnage for the GOP, has stark political imperatives for getting a deal. Not so for Pelosi, who told fellow lawmakers this week that “I don’t think our leverage has ever been greater.”

Additionally, the House has passed two wide-ranging coronavirus relief bills — a $3.4 trillion package in May and a narrower $2.2 trillion version at the beginning of this month — while the GOP-led Senate has failed to act. Senate Republicans have made their distaste for the White House’s $1.8 trillion proposal crystal clear, leading Pelosi’s allies to question why the onus should be on her when the Senate hasn’t acted and the White House can’t even get Republicans in line behind the president’s own proposal.

“The time for action was months ago, when the House first acted,” said Rep. Robin Kelly (D-Ill.).

Pelosi has made the case publicly and privately that a subpar agreement would allow the president to put his name on stimulus checks without producing policy outcomes and funding to meet the demands of the moment.

If Pelosi waits, she could instead be negotiating with a Biden administration that would be more likely to back the kind of massive relief package the speaker has been pushing for since May. She has told her colleagues this week that any deal struck down the road will be retroactive, an attempt to make up for any suffering Americans have endured while negotiations lag.

Still, waiting is risky. Trump is currently more desperate than ever due to his poor approval ratings and position trailing Biden in the polls. Should he win re-election, however, he may not be such a willing partner. And if he loses, he might not either. Pelosi is scheduled to resume negotiations with Mnuchin on Thursday, and neither of them has said they are giving up hopes for a deal.