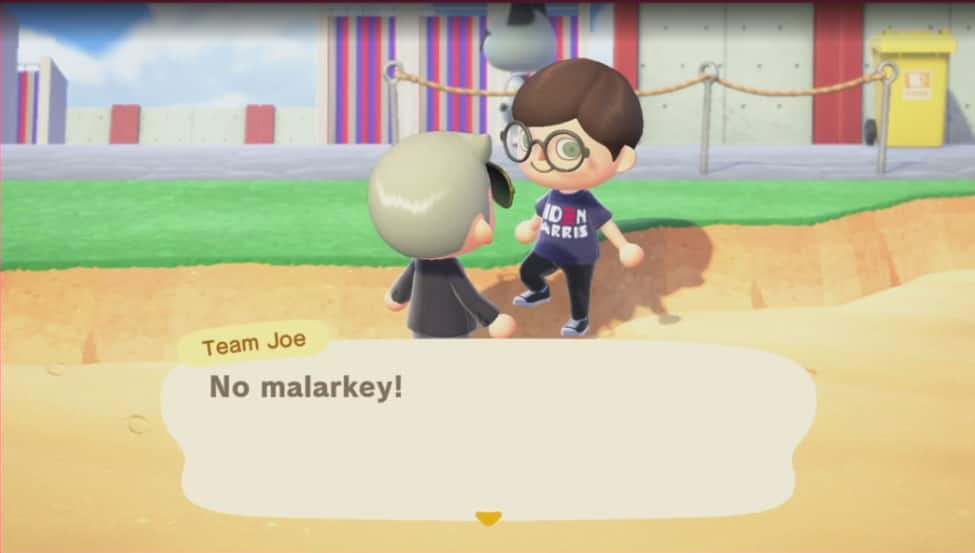 “When [the campaign] approached me, ‘Hey, we’re doing this Animal Crossing thing, would you like to debut it,’ I thought, ‘Aw man I hope this island isn’t terrible,” said KindaFunny host and former IGN journalist Greg Miller. “This island is way better than my island.”

Even though “Animal Crossing” released during the early days of the pandemic, the game has remained one of the year’s best sellers. Taking lessons from the last several months of “Animal Crossing” creators, Biden’s island architect makes expert use of custom decals with unique street markings, lawn signs and even a photo of young Biden in his “office,” which he shares alongside vice president nominee Kamala D. Harris.

The stream is a departure for Miller, who has admittedly not been politically active until this year, when he decided to just come out and support Biden and Harris. Gary Whitta, the “Star Wars” screenwriter who’s achieved viral fame for his “Animal Crossing” and “Fall Guys” talk shows on Twitch, is also outspoken against President Trump, and joined Miller for the Biden island tour.

KindaFunny’s chat may have seemed open to Miller’s pivot to talking more politics, and most were very supportive of Biden. A number of users said they had already voted. But the chat moderators also seemed to be pretty strict during the island tour. Even sarcastic, innocuous statements were being removed, including one message that simply stated, “Jeb Bush 2020.”

After the tour, Miller and Whitta chatted about why they’re supporting Biden. This moment does crystallize how many influencers in the gaming space are being more outspoken about electoral politics than ever before, even since 2016. Miller, who’s pivoted his career from journalism to influencer entertainment, pleaded with his fans to vote for Biden as a personal favor to him.

“It’s literally night and day,” Miller said, speaking about the Trump and Biden televised town halls that aired Thursday night. “I just want to be able to respect the president again. I just want to look to the office and understand that there’s an actual adult in there.”