Trump’s comments on conspiracy are celebrated: ‘This was the biggest pitch for QAnon I’ve ever seen’ 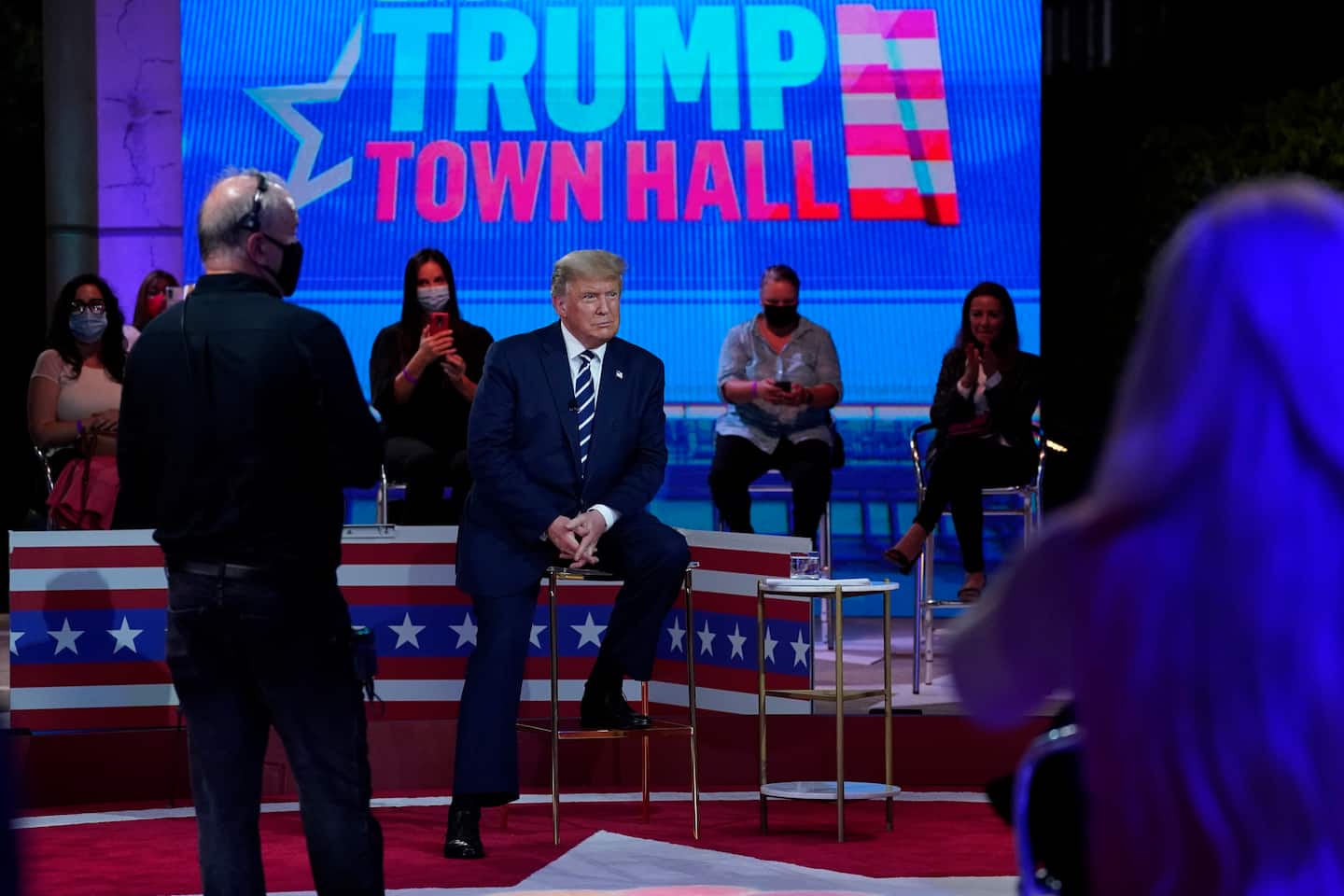 But Trump’s response to a question from moderator Savannah Guthrie offered a shot of validation from the central figure in the QAnon cosmology, which portrays the president a savior waging a secret war against a cabal of satanic pedophiles, supposedly including prominent Democrats and Hollywood celebrities.

A QAnon supporter on 8kun, another fringe site, approved, “I thought he had the perfect answer.”

Another 8kun user said of Trump’s response, “masterfully done by POTUS” — using an acronym for president of the United States.

Trump’s comments — and the reaction they generated on the far right — echoed his call in the debate last month for the Proud Boys, another far-right group, to “stand back and stand by.” That line, from which Trump later sought to distance himself, set off celebrations across social media among supporters of the all-male fringe group that often engages in street violence.

QAnon, born in October 2017, has grown sharply in recent months, buoyed by conspiracies related to vaccines and the coronavirus pandemic as well as the movement’s sharpening focus on Trump’s reelection campaign. The coming election has increasingly become the focal point of the movement, which had seen its popularity skyrocket on the encrypted messaging app Telegram and on Facebook, according to research by the SITE Intelligence Group, which tracks political extremism.

“It’s beyond words how much Donald Trump has elevated the domestic threat that is QAnon,” said Rita Katz, the executive director of SITE. “I’ve never been more worried for U.S. democracy than I am now, and it’s disturbing how much of this fear is coming from the president himself.”

Although Facebook announced restrictions on QAnon in August, SITE’s research documented sharp growth in the number of groups devoted to the conspiracy theory on Facebook and the number of members of those groups. Facebook toughened its restrictions Oct. 6, imposing a near-total ban that should make it much harder for QAnon to organize and recruit on the site.

QAnon’s response to Trump’s comments also could be found on Instagram, the photo-sharing subsidiary of Facebook, after the NBC event. One widely circulated meme, accompanied by hashtags affiliated with the conspiracy theory, showed an image of Guthrie altered to appear demonic, with red eyes, and called her a “Practicing Satanic Witch.”

The Coalition for a Safer Web, a nonprofit group that advocates for technologies and policies to remove extremist content from social media, found that and other QAnon social media posts celebrating Trump’s comments.

“They love it,” said the coalition’s president, former U.S. ambassador to Morocco Marc Ginsberg. “It’s ricocheting around all over the place.”

Much of the QAnon celebration of Trump’s comments were on Telegram channels based in Germany, one of several nations where the conspiracy theory born in the United States has increasingly taken root.

Trump’s prime-time comments were in line with mounting offline signals of the conspiracy theory’s growing hold among his supporters. The liberal watchdog group Media Matters said Trump has amplified tweets from accounts linked to QAnon 258 times, with most coming since the coronavirus pandemic reached the United States this year, and that 80 Republican candidates for Congress have expressed support for some elements of the conspiracy theory.

In August, the president’s reelection campaign accepted more than $1 million from a couple whose planned September fundraiser — which they were scheduled to host for Vice President Pence — was canceled after the Associated Press reported that they were vocal supporters of QAnon.

The contributions, from Caryn and Michael Borland of Southern California, were reflected in campaign finance disclosures made public Thursday. Each of the retirees contributed about half a million dollars, and their son, who lists his occupation as “student,” contributed a similar amount, the filings show. The couple did not immediately respond to an email seeking comment.

Isaac Stanley-Becker contributed to this report.