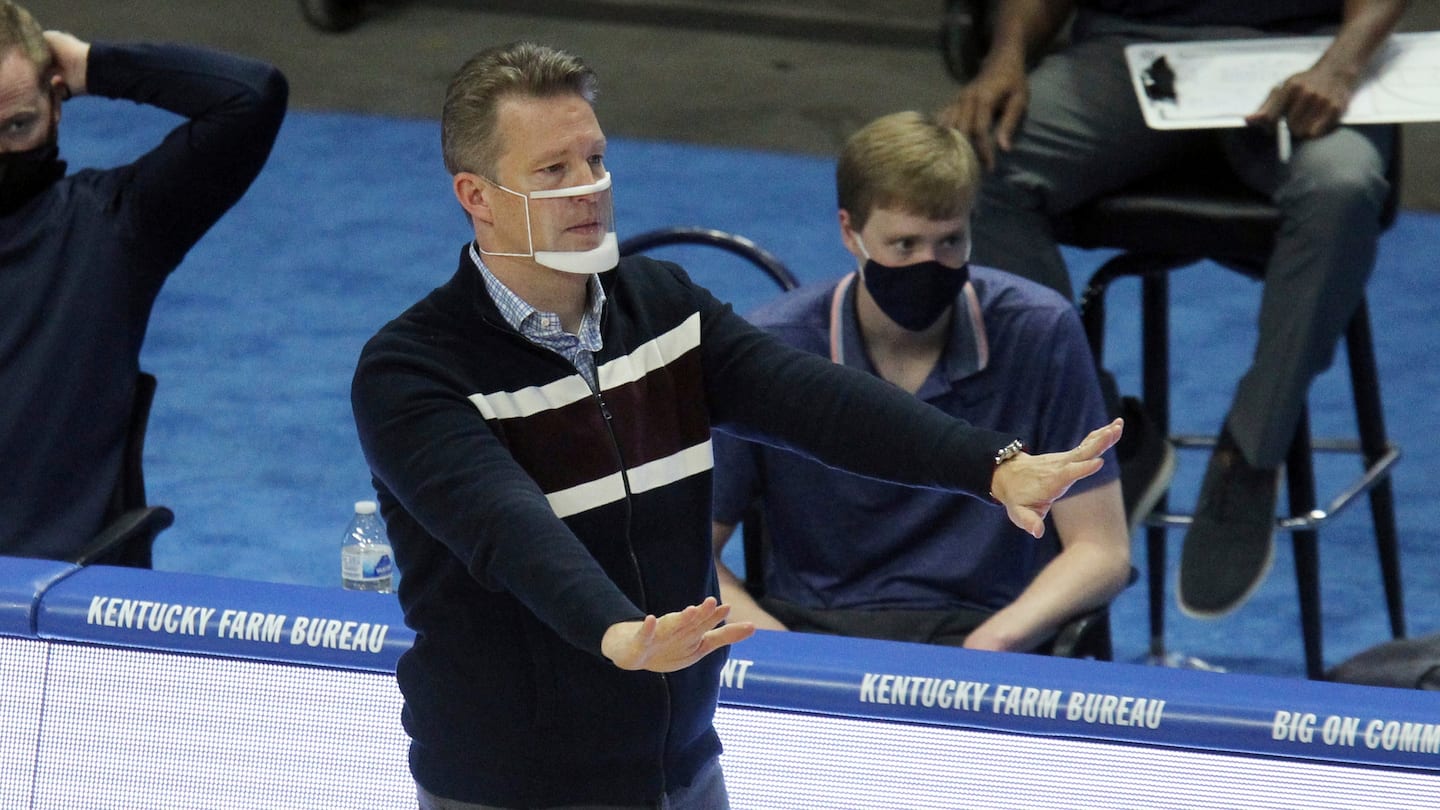 At that moment, Richmond men’s basketball coach Chris Mooney was in his 14th season and the Spiders were headed for a second straight losing season — after a decade in which they never finished below .500 and won at least 19 games seven times. There had been two NCAA tournament berths — including a trip to the Sweet 16 in 2011 — and seven postseason bids.

Not good enough, according to the fans who took out the billboard.

“It really upset all of us,” said Grant Golden, then a sophomore, who is now playing as a graduate student. “I don’t care if he’d never won a single game; no one deserves to be treated like that, especially when you understand the way he’s represented the university and what he does for all of us who play for him. It was terrible.”

Mooney, 48, has two sons — Danny and Ryan — who are now 11 and 8 and are basketball junkies. He had to explain the billboard to them. “It really wasn’t all bad,” he said. “Naturally, it upset them. But understanding that adversity is sometimes a part of life wasn’t a terrible lesson for them to learn.”

Fast-forward a little more than 21 months to Sunday, when Richmond went into Rupp Arena and handily beat No. 10 Kentucky, 76-64. The Spiders trailed by four at halftime but outscored the Wildcats 48-32 in the second half, leading by as much as 16 before cruising to their first road win over a top-10 team in 26 attempts.

“A lot of it was our defense and our maturity,” said Mooney, who played at Princeton for Pete Carril. “Two years ago we were a young team that had dealt with injuries and transfers. I’m not making excuses; those are just facts. I was responsible for the failures. But you could see we had a group that had the potential to be very good in the not-too-distant future.”

Richmond was 11-15 when the billboard went up after going ­12-20 the previous season. There is little doubt that the success of archrival VCU — six miles from the Richmond campus — had a lot to do with the frustration of the fans who paid for the billboard. The Rams were then on their way to an eighth NCAA tournament bid in nine seasons. Even during their spectacular ­29-8 season in 2010-11, the Spiders took a back seat in their own city to VCU, which went to the Final Four.

“Having your archrival in the same city can be both good and bad,” Mooney said. “When you’re both good, it raises the profile of the rivalry, and that helps in recruiting, no doubt. But when they’re good and you’re struggling, it can make the outlook some of your fans take negative.”

On the day the billboard went up, Mooney met with his athletic director, John Hardt, who had arrived from Bucknell the previous summer. Hardt asked Mooney what he wanted him to do — a public vote of confidence, perhaps?

Mooney didn’t want any of that. He wasn’t going to respond publicly, and he didn’t want the players to get on social media and attack the billboard, either. Instead, he asked Hardt whether he would be willing to come to practice and talk to the team.

“He walked onto the court before we started that day and very calmly told the players not to worry about anything,” Mooney said. “He told them he had faith in what we were doing and he thought this group — the guys standing right there — had a bright future, that we weren’t all that far away. There was truth to that. We’d been losing a lot of close games. It wasn’t like we were down 21-3 every night. We had chances to win most games. We just weren’t doing it.”

Two days later, Richmond played at La Salle — in Philadelphia, Mooney’s hometown — and beat a team it had lost to at home a few weeks earlier.

“That was really cool,” Golden said. “We really came together that day and started to show some of that potential we knew we had. We’d been through some things, including the billboard, but it wasn’t going to stop us.”

Golden knows firsthand about adversity. In a game against Texas Tech early in his freshman year, he felt dizzy and began walking toward the bench to come out. He never made it, keeling over on the court.

“None of us had any idea what had happened,” Mooney said. “It was frightening. Thank goodness, my next-door neighbor was at the game.”

Mooney’s neighbor is Leo Gazoni, an honorable mention All-Met soccer player at Washington’s Gonzaga High in 1994. More importantly, he is now a cardiologist and could tell right away that something had gone wrong with Golden’s heart.

“We were going to take him to the locker room to try to figure out what was wrong,” Mooney said. “But Leo came down and said we had to get him to a hospital. I’m not sure how he knew, but he knew.”

Golden was suffering from an arrhythmia that causes the heart to race.

“I remember lying on the floor after I came to,” he said. “I could feel my heart pounding against the floor, it was going so fast.”

Golden’s heart rate was still about 250 beats per minute when he was placed in the ambulance. By the time he arrived at the hospital, it had calmed down considerably. A few days later, he underwent a cardiac ablation procedure that corrected the problem. He takes no medicine and hasn’t had another incident since.

Last season, the Spiders lived up to the potential Mooney had seen amid the struggles. They went 24-7 and finished second in the Atlantic 10 behind Dayton, which would have been a No. 1 seed had there been an NCAA tournament.

“We’d become very good with a chance to be great in March,” Mooney said. “I thought going to Brooklyn [for the conference tournament], we were about a 10th seed [in the NCAA tournament] with the chance to go higher if we played well there. It was a fun year until it got shut down.”

The first clue that Richmond had turned the corner came during an upset in November 2019, when the Spiders beat perennially ranked Wisconsin in Brooklyn.

Golden had become an all-conference player, and 6-7 Nathan Cayo had emerged as a very solid complement. The team had, and still has, excellent guards in Jacob Gilyard and Blake Francis, and swingman Nick Sherod had come back from an ACL injury to average 12.7 points and 5.4 rebounds. Sadly, Sherod tore his ACL again this preseason and is done for the year. His absence will be felt, but his teammates still feel good about where they are.

“We’d gotten to the point last season where we had a lot of confidence,” Golden said. “We had different guys who could score, but more important we all played good defense.”

That was evident in the Kentucky game. The Wildcats failed to make a three-pointer for only the second time in 33 years, going 0 for 10. The Spiders didn’t shoot all that well themselves, but defense carried them.

“At halftime you could tell they knew they hadn’t played well and yet, there we were down only four,” Mooney said. “We knew we could play better than that and, when we did, we were really good.”

So while the Spiders’ near future is a bit uncertain, Mooney knows he has a good team. And the next billboard that goes up in Richmond might say simply, “Sorry, Coach.”

“I don’t need anything like that,” he said, laughing at the suggestion. “I like my guys as players and as people. That’s all I need.”