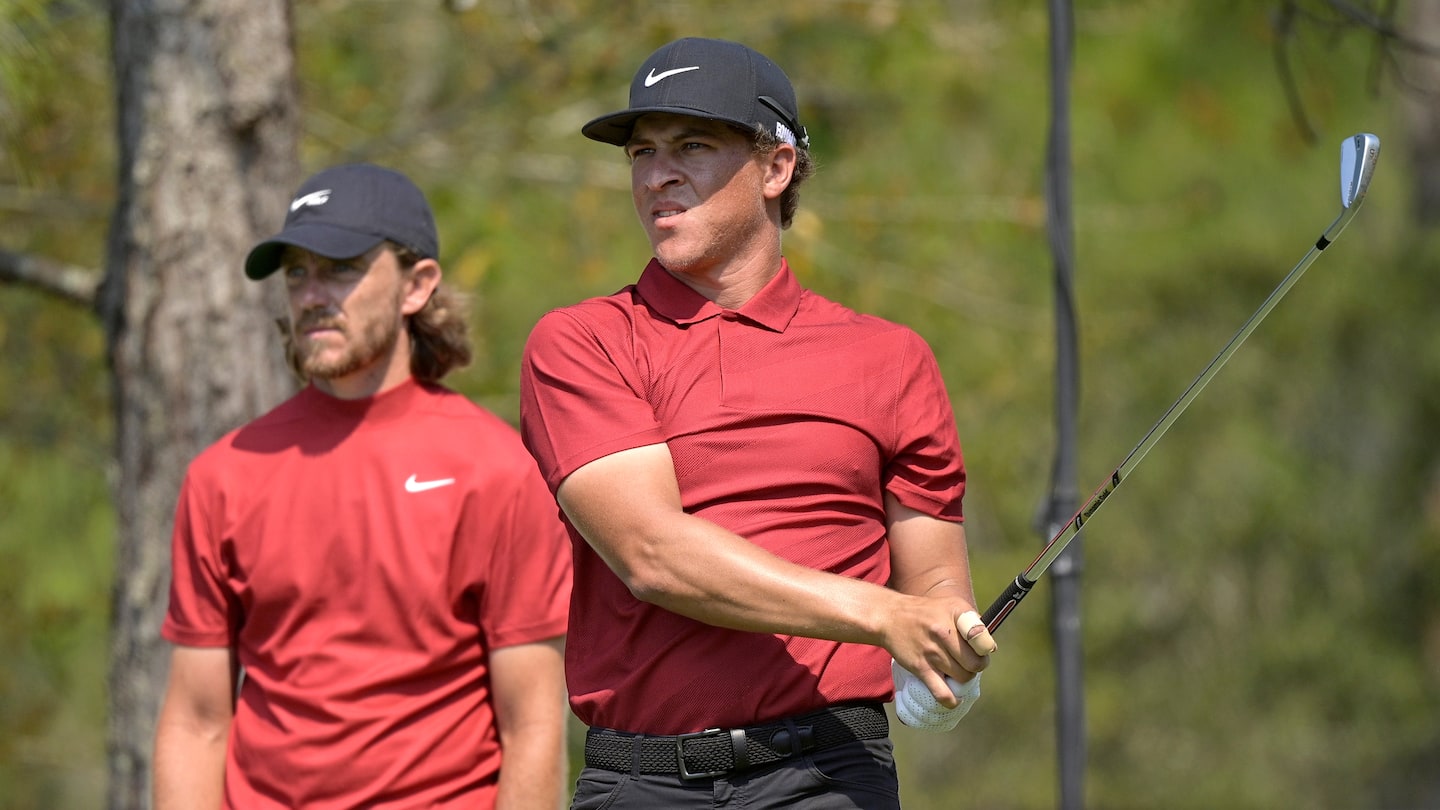 Woods is recovering from a car crash Tuesday that caused serious damage to his legs. In an update Friday from his Twitter account, the 45-year-old was described as “in good spirits” and grateful for all the “wonderful support” he has received. He remains hospitalized at Cedars-Sinai Medical Center in Los Angeles and has undergone further procedures after the initial surgery to repair two open fractures and an ankle injury to his right leg.

Phil Mickelson, his formerly chilly relationship with Woods long since mended, went out of his way to swap his trademark black outfit for Woods’s red-and-black at a Champions Tour event in Tucson. Mickelson, who played at Arizona State, discovered that most red shirts for sale had the logo of rival University of Arizona, so he wore a black zip-up pullover, with the red collar discreetly peeking out and the logo covered.

“So two things happened today. I wore red on Sunday in honor of Tiger to let him know that the players support him and appreciate all that he’s done. And I had to buy a red shirt and of course every red shirt here has a big A on it,” Mickelson said, adding a little wisecrack. “I hope he knows that we’re supporting him because that was a lot for me to do that.”

Woods also received the show of support at the World Golf Championships’ Workday Championship in Bradenton, Fla., where Rory McIlroy, Justin Thomas, Patrick Reed and others wore their concern for him on their sleeves and elsewhere.

McIlroy was said to have been wearing red and black together for the first time in his career as he began a final-round pairing with Reed.

“We’re very lucky that he’s still here,” McIlroy said of Woods on Wednesday (via golf.com). “I feel like we should pay tribute to him every day for being on the PGA Tour and what he’s done for golf.”

Thomas, one of Woods’s closest friends on the tour, was emotional Tuesday while speaking with reporters in Bradenton after the initial news on Woods emerged.

“I’m sick to my stomach,” Thomas said then. “You know, it hurts to see one of my closest friends get in an accident. Man, I just hope he’s all right. Just worry for his kids, you know. I’m sure they’re struggling.”

On Saturday night, Thomas tweeted a photo of a shirt with tight red stripes matched with black pants. “Seemed fitting for tomorrow after the kind of week we’ve had,” he wrote. “Black and red on Sunday for TW!”

Thomas, who was dropped by longtime apparel sponsor Ralph Lauren last month after he was heard uttering a homophobic slur during a tournament, tweeted Saturday that he considered going even further with the Woods homage by purchasing a Nike mock turtleneck. However, he said he couldn’t figure out a way to get a current sponsor, Citi, “embroidered on the sleeve quick enough.” With a shirt more pink than red, Jon Rahm also appeared to be making as much of a tribute as he reasonably could, given what he had on hand.

Max Homa, who won last week’s Genesis Invitational, a tournament hosted by Woods at the Los Angeles-area Riviera Country Club, tweeted Saturday that he “didn’t pack any red and black for this road trip” to Florida and arrived before learning of the crash.

“I will try and pay my respects to TW tomorrow with some really great final round golf,” he wrote. “Hope to see a lot of red and blackout there!”

Reacting to criticism online for not seeming to do more to pay his respects to Woods, Homa noted he couldn’t just go out and buy a red shirt because of the problem of affixing sponsorship logos. He said on Twitter on Saturday evening that the flak he was taking was “the weirdest thing I’ve experienced” on that platform.

“I love Tiger more than u guys. Promise,” Homa tweeted. “Listen to an interview from last week. Red and black tomorrow doesn’t prove that. A lifelong attempt to mimic his approach to the game of golf does.”

In his comments earlier in the week, McIlroy pointed out that, while he and other players were planning on paying tribute to Woods, some of the reaction to the crash seemed more appropriate for a worse outcome.

“He’s not gone,” McIlroy said then (via golf.com). “He’s got some pretty bad injuries, but he’s going to be okay. It’s not as if — I was looking at some of the coverage yesterday, and they were talking as if he was gone. It’s like, he was in a car crash. It was really bad, he’s very fortunate to be here, which is great, but I mean, that’s the extent of it.”

At the same time, Woods’s injuries could prove career-ending, and PGA Tour players are well aware of how much he has meant to their sport, as well as to them personally and professionally.

“Everyone I’ve talked to has been in a strange mood due to the news,” Xander Schauffele said this week at the Workday Championship. “I was talking to my caddie about the impact he’s had on the game of golf. It’s not good for us, not good for the game of golf. All we can do is hope that he’s fine and has a speedy recovery.”

Saying this week that Woods’s stunning, runaway win at the 1997 Masters “changed the course of my life,” Finau told reporters: “Without that event, I probably wouldn’t be here, wouldn’t be playing golf, so he definitely changed the course of my life, my career. I’m one of hundreds of guys out here probably that would say the same thing. He means a lot to the game, but individually I think he means a lot to us just individually, especially for me.”

Third-round leader Collin Morikawa wore a gray shirt Sunday to go with his black pants — he said he planned to wear red and black, but the clothes shipped to him never arrived — but after holding off the field to win the Workday Championship he showed some emotion while discussing how much Woods means to him.

After an interviewer pointed out to Morikawa that he had just become the only player other than Woods to have won both a WGC event and a major before turning 25, he said, “Tiger means everything to me.”

“Yes, he had the crash, and thankfully he’s all right and hopefully he has a quick and great recovery, but I don’t think we say thank you enough, so I want to say thank you to Tiger,” Morikawa added while turning toward the camera.

“Because sometimes you lose people too early, like Kobe [Bryant],” continued Morikawa, who, like Woods, is a Los Angeles-area native and Lakers fan. “I lost my grandpa about a month ago, and you don’t get to say thank you enough. So, thank you, guys.”