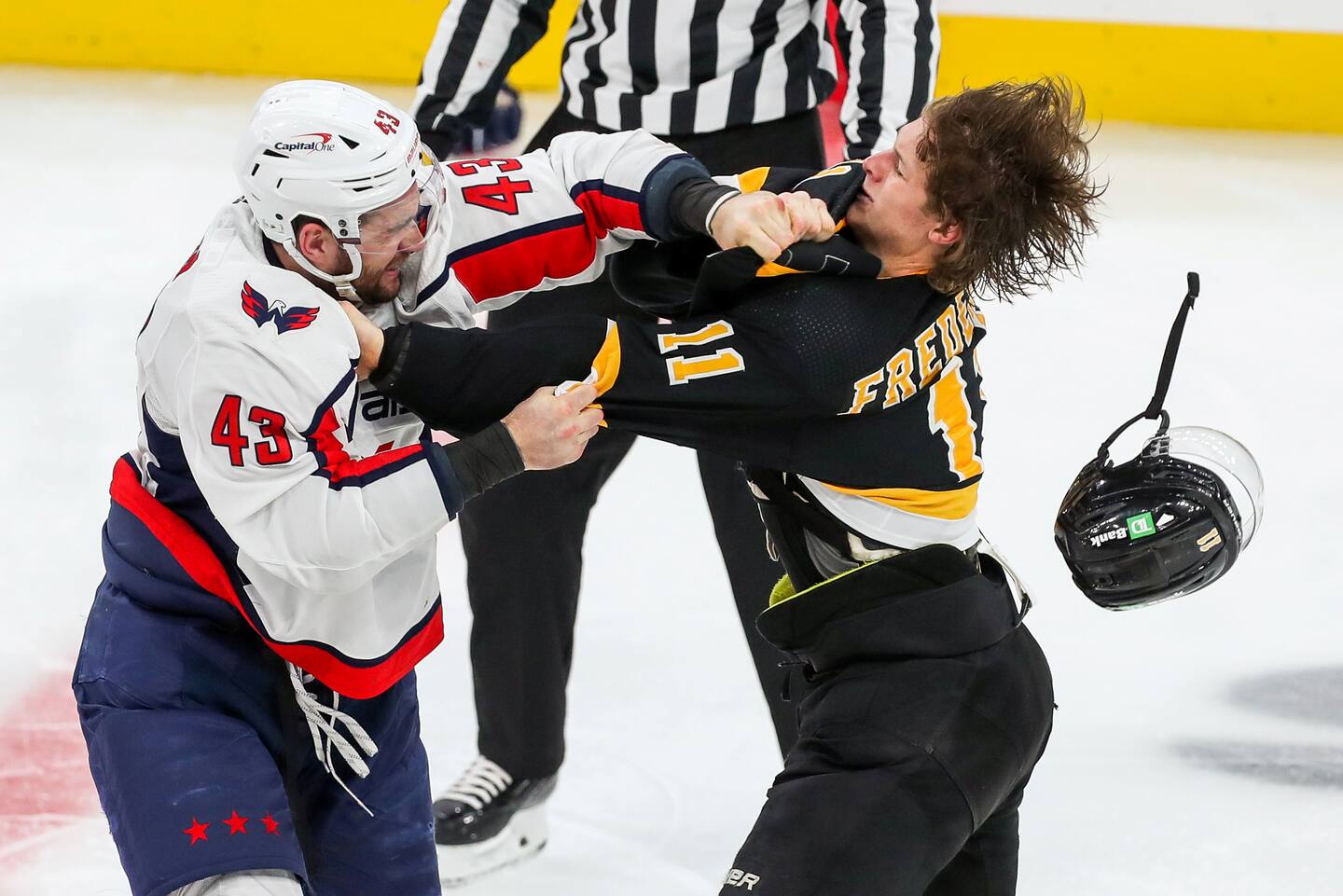 An in-person hearing allows for a suspension longer than five games but does not guarantee supplemental discipline. Wilson is suspended until the hearing takes place.

Carlo was taken to the hospital after Wilson’s hit on Friday night but officials did not call a penalty on the ice.

The play occurred with 1:30 left in the first period of Boston’s 5-1 win. Carlo was looking down for the puck by the end boards and Wilson came barreling in. He laid a full body check on Carlo, which slammed the defenseman’s head into the glass. Carlo crumpled to the ice and left with help from a Bruins’ trainer and team doctor.

The Capitals are next scheduled to play Sunday night against the Flyers at Philadelphia.

Boarding is defined as a player checking or pushing a “defenseless opponent in such a manner that causes the opponent to hit or impact the boards violently or dangerously.” The league must determine if contact could have been avoided and under what circumstances the check was made.

“Clearly looked like, to me, [he] got him right in the head, defenseless player, predatory hit from a player that’s done that before,” Cassidy said.

Brad Marchand called it a “b——- hit” and a “f—— cheap shot” on the local Boston broadcast. The two teams do not meet again until April 8.

Capitals Coach Peter Laviolette noted that Wilson’s feet stayed on the ice during the hit and it just “looked like a hard hit in the corner.”

Bruins captain Patrice Bergeron said improving the safety of the game has to start with the players and that while improvements have been made, there’s more to be done.

“I think we have to be smarter,” he said. “We have to think about consequences when we go for hits.”

Wilson has been suspended four times in his NHL career, which spans eight seasons. While he is no longer considered a “repeat offender” by NHL standards, since his last suspension came more than 18 months ago, his history can be referenced when determining any supplemental discipline.

Wilson has been suspended in the past for boarding. He was suspended for the first four games of the 2017-18 season for boarding St. Louis Blues’ Sammy Blais in the team’s preseason finale.

The last time Wilson was suspended was for his preseason hit against St. Louis Blues forward Oskar Sundqvist on Sept. 30, 2018. Wilson’s shoulder collided with Sundqvist’s head at center ice and he was handed a 20-game suspension. After his initial ban was upheld by NHL Commissioner Gary Bettman in a subsequent appeal hearing, Wilson had the suspension reduced to 14 games through a neutral arbitrator.

At the time, Bettman wrote in his ruling: “I hope that this decision will serve as an appropriate ‘wake-up call’ to Mr. Wilson, causing him to reevaluate and make positive changes to his game.”