Matt Gaetz tries to pull Tucker Carlson into his mess 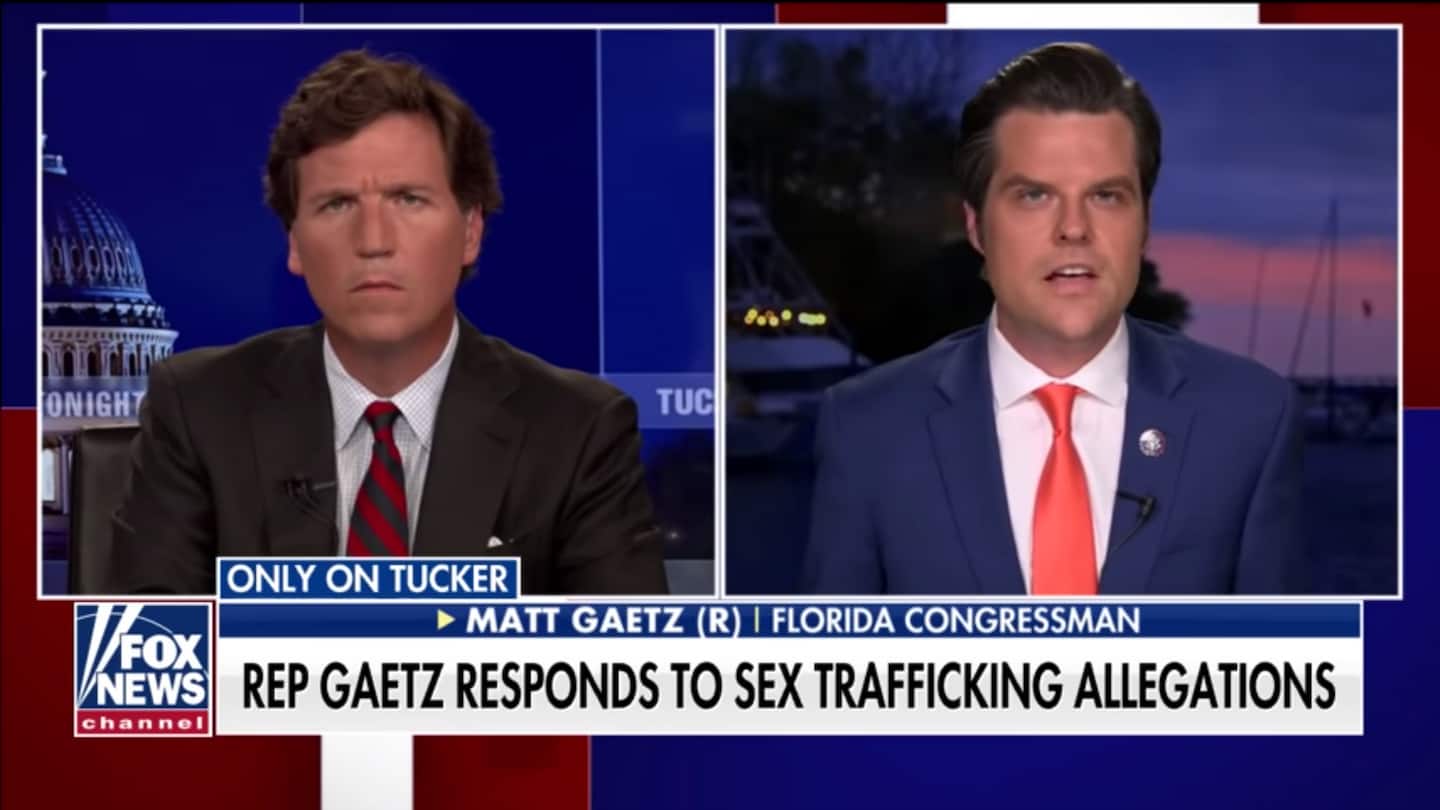 Over the course of a tortuous exchange on Tuesday night with Fox News host Tucker Carlson, Gaetz (Fla.) did what happens so often on the network’s airwaves: He tried to portray himself as a victim. The news peg for the interview was the New York Times’s scoop that the Justice Department was investigating Gaetz for allegedly carrying on a sexual relationship with a 17-year-old girl — including traveling with her. “Investigators are examining whether Mr. Gaetz violated federal sex trafficking laws, the people said,” reads the Times story. “A variety of federal statutes make it illegal to induce someone under 18 to travel over state lines to engage in sex in exchange for money or something of value.”

As the Times explained, the inquiry into Gaetz’s conduct is part of an inquiry into former Seminole County, Fla., tax collector Joel Greenberg, a political ally of Gaetz. The lawmaker told the Times, “I only know that it has to do with women. I have a suspicion that someone is trying to recategorize my generosity to ex-girlfriends as something more untoward.”

But Gaetz said much more during his bonkers interview with Carlson. “What is happening is an extortion of me and my family involving a former Department of Justice official,” said Gaetz, who went on to claim that this former official had texted his father, Donald Gaetz, asking for a meeting. In that meeting, Matt Gaetz told Carlson, “a person demanded $25 million in exchange for making horrible sex trafficking allegations against me go away.”

Before Carlson could jump in to slow down this torrent, Gaetz continued: “Our family was so troubled by that, we went to the local FBI, and the FBI and the Department of Justice were so concerned about this attempted extortion of a member of Congress that they asked my dad to wear a wire, which he did with the former Department of Justice official.” Gaetz demanded that the Justice Department release the resulting audio recordings and commented on the timing of the Times “leaking this information, smearing me and ruining the investigation that would likely result in one of the former colleagues of the current D.O.J. being brought to justice for trying to extort me and my family.”

Faced with this avalanche of claims and counterclaims, Carlson was left to establish some basic facts, which he did rather well. He asked Gaetz to disclose the name of this former Justice Department official. David McGee, claimed Gaetz, adding that he now works at the Florida law firm Beggs & Lane. In an interview with The Post, McGee said that Gaetz’s father had contacted him, and denied anything approaching what Matt Gaetz alleged: “It is completely false. It’s a blatant attempt to distract from the fact that he’s under investigation for sex trafficking of minors. I have no connection with that case at all, other than, one of a thousand people who have heard the rumors,” said McGee. During an MSNBC appearance, Katie Benner, one of the reporters on the Times story, noted that McGee wasn’t even involved in the Justice Department investigation.

Next, Carlson asked whether Gaetz believed McGee was motivated by greed — launching Gaetz on a free-association clinic in which he said there was a “demand for money in exchange for a commitment that he could make this investigation go away.”

Then, more uncomfortably for the host, Gaetz sought to establish commonality with Carlson himself: “I’m not the only person on screen right now who has been falsely accused of a terrible sex act. You were accused of something that you did not do, and so you know what this feels like. You know the pain it can bring to your family. And you know how it just puts people on defense when you’re accused of something so salacious and awful,” said Gaetz.

Perhaps committed to dashing his chances of ever becoming a Fox News contributor, Gaetz again pulled Carlson into the picture: “I can say that actually, you and I went to dinner about two years ago — your wife was there — and I brought a friend of mine: You’ll remember her and she was actually threatened by the FBI, told that if she wouldn’t cop to the fact that somehow I was involved in some pay-for-play scheme, that she could face trouble.”

Actually, no: “I don’t remember the woman you’re speaking of or the context at all, honestly,” replied Carlson, “but I would like to know who — so they’re saying there is a 17-year-old girl who you had a relationship with?” No such person exists, Gaetz replied.

So it went. After a break, Carlson showed some awareness: “That was one of the weirdest interviews I’ve ever conducted.”

If the host felt put upon by Gaetz’s performance, Carlson can chalk it up to his own network’s baleful influence: Gaetz is a frequent guest on Sean Hannity’s prime-time show, having turned in 127 appearances on that program since November 2017, according to Media Matters for America. So when Carlson marvels at the craziness of the interview, he’s coming face to face with the ethic of his own employer.