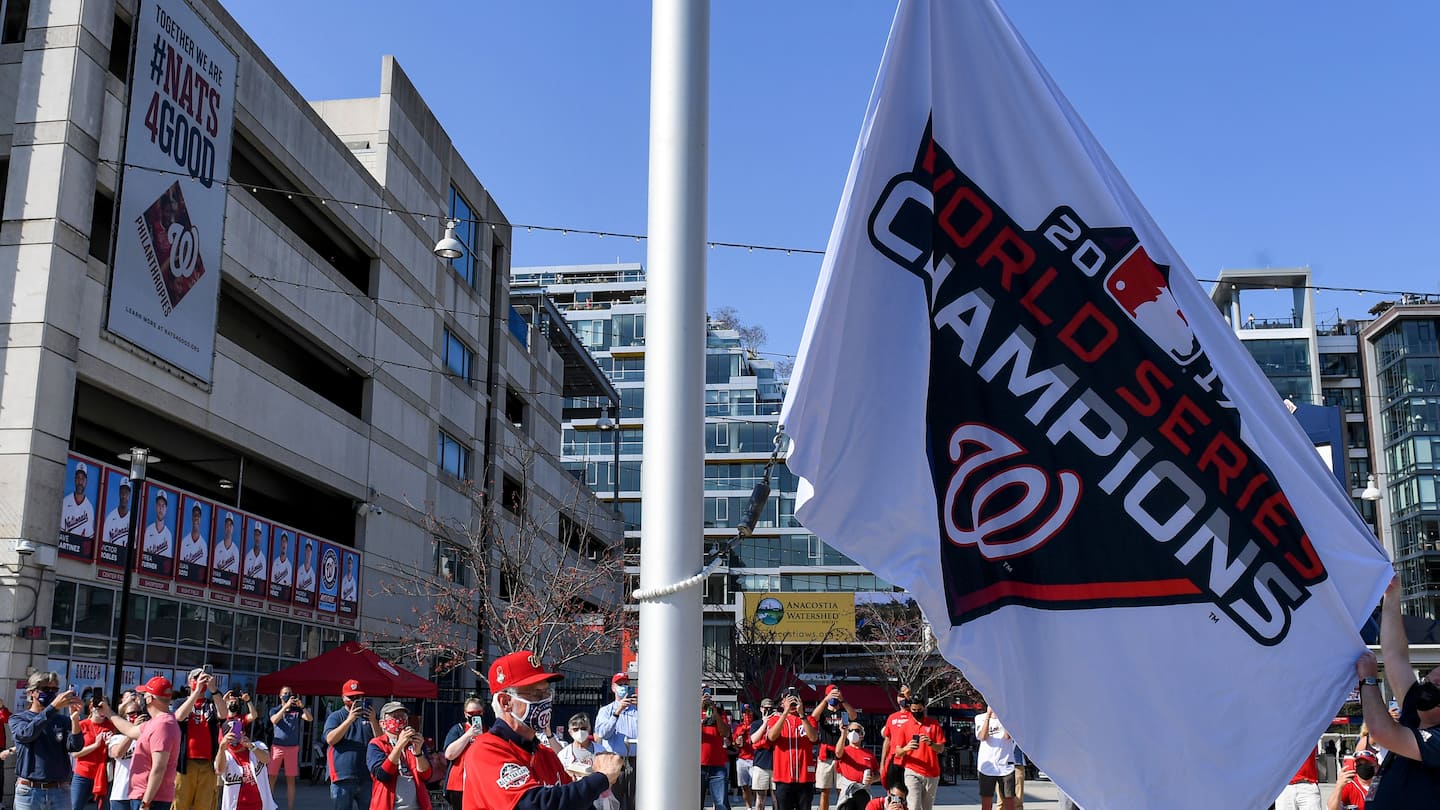 With due respect to all MLBers, that trio was weaker, on paper, than the sixth, seventh and eighth hitters in the Washington lineup in its final game as the Senators in 1971 — Dave Nelson, Del Unser and Tom Ragland — or the players in those slots in the first game of the new Nats in 2005 — Vinny Castilla, Terrmel Sledge and Brian Schneider.

Three anchors. So, in the second inning, Pérez singled, Stevenson crushed a bullet through Atlanta’s alarmed second baseman (ruled an error) and both scored when Lucroy doubled.

On a day when Max Scherzer allowed four home runs to the first 10 men he faced, the Nats came from behind to walk-off Atlanta on a Juan Soto single before a covid capacity crowd of 4,801.

My wife, in our 10th floor hotel room six blocks away, with the windows closed, was not watching the game because the TV was broken. “The noise just exploded, so loud I was shocked,” she said. “So, I knew the Nats won.” And D.C. found out how 5,000 can sound like 30,000.

This is baseball — quintessentially unpredictable, any-day-can-astound-or-amuse-us baseball. This is the game that Washington had from 1901 through 1971, lost for 33 years and now, in the culmination of a multigenerational cycle, celebrated once again in full-throated yet pandemic-bizarre fashion as the Nats raised their 2019 World Series title banner before the opener.

“It’s not the noise. It’s the energy, it’s the exciting feeling in the crowd,” said Trea Turner who hit a two-run homer on Tuesday and another on Wednesday. “By their reactions, they tell you where you are in the ballgame. They’re a reason we won this game.”

The enthusiastic assemblage was not so much a “crowd” as it was a group of witnesses, a few thousand who can testify that, after a gap of 95 years, Washington really did win the World Series 18 months ago; and that, finally, a group of breathing, moving Nats fans — not cardboard cutouts — could cheer each player’s introduction, with the volume in every case a reflection of how they played in 2019, not the following year. There was a 2020?

All this — one Senators team leaving for Minnesota in 1961, then a barely-funded expansion team replacing them in D.C., and, finally, that team absconding to Texas where the sinking Rangers, 50 years later, have still never won a World Series — is a saga for AARP or those who love history.

But it’s a rich story because it epitomizes a city’s stubbornness and the rewards, literally half-a-century in the making, that have now been reaped. For example, my dad, who rarely went to baseball games and never bought a box seat in his life, sat with me in “the best seats” for that final game in 1971. Then, he was still fit enough to swan dive off the “deep-end high board” at old Glen Echo amusement park, which few did. He lived into his 80s. Yet that night in 1971, still fresh to me, is so distant now that he’s been dead for 27 years.

Many, of course, do not have a sense of this sweep or the length of Washington’s MLB drought. But, 50 years after the Second Betrayal, after real fans finally cheered for the raising of a championship banner, seems an apt time to pause and digest. Consider how long a journey it’s been just to have a plain old baseball game at Nats Park be a familiar symbol of normalcy, of a pandemic receding and, as Turner put it, feeling “just joy.”

Between 1971 and 2005, there were days, and even months, when the baseball world firmly believed a team was moving to D.C., whether the Padres, Giants, Pirates, White Sox, A’s, Orioles, or the expansion franchises that eventually went to Toronto, Seattle, Colorado, Miami, Tampa Bay and Arizona.

I wrote The Post’s 50-word bios on every Padres player, since we knew they’d be in D.C. in 1974. Topps short-printed cards of the “Washington Nat’l Lea.” club with the Pads’ pictures on them — collector’s items, now.

When I was The Post’s baseball writer, while interviewing Jack Kent Cooke about his NFL team, he said, in his usual diminish-to-dominate style, “My dear boy, Washington needs a baseball team. Are any for sale?” I told him, “Maybe Pittsburgh.” Within minutes, Cooke got the Pirates’ owner on the phone and, with my jaw dropped, tried to buy the team!

When he first owned the Orioles, Edward Bennett Williams hinted they’d move to D.C. Every city that wanted a new ballpark, including Charm City, used that threat to extort public money. In my book, Nats Park is at least the sixth MLB park “built by Washington.”

Local ownership groups battled for every expansion team. Old-timers games and MLB exhibitions, always before big crowds at RFK Stadium, sucked bucks from us salivating D.C. yokels. MLB’s dirty secret: Why put a team in D.C. when the city’s very existence got expansion towns to pony up better deals?

Tuesday at Nats Park, amid a vibrant Southeast Waterfront, with the gleaming new Frederick Douglass Bridge across the Anacostia River as the latest eye-feast, and D.C. United’s stylish Audi Field nearby — plus that cherry-on-top World Series flag — was a consummation that decades of D.C. fans never dared imagine.

A team in D.C., yes, probably inevitable. An attractive ballpark built on budget that is a financial boon to the city — come on, a pipe dream. A perennial, well-run, winning team, able to handle one of the higher payrolls in the sport — from 1971 for the next 40 years, I never once heard that cited as a possibility.

Nats fans have been so well-fed that it’s easy to forget that Daniel Murphy finished second for MVP, Patrick Corbin fanned 238 in a season and then was a relief godsend in October. Trea Turner, Gio Gonzalez, Ryan Zimmerman and Jayson Werth. Not to be mean, but, well, let’s be mean: The Nats stars of the last 10 years absolutely dwarf — in quality, quantity and indelible moments — all of the Washington Football Team stars of the last 30 years.

All of this is a lot to swallow, much less digest, which is why it can feel like such a continuing surprise in our civic life, even as the “new” Nats begin their 17th season.

Were you there the day they raised the championship banner before live fans and a Washington team with nine replacement players walked off the Braves?

For a third-of-a-century, we never let such thoughts cross our minds. Now, they are just part of a dependable, delicious normal that we crave and, bit by bit, will surely receive.