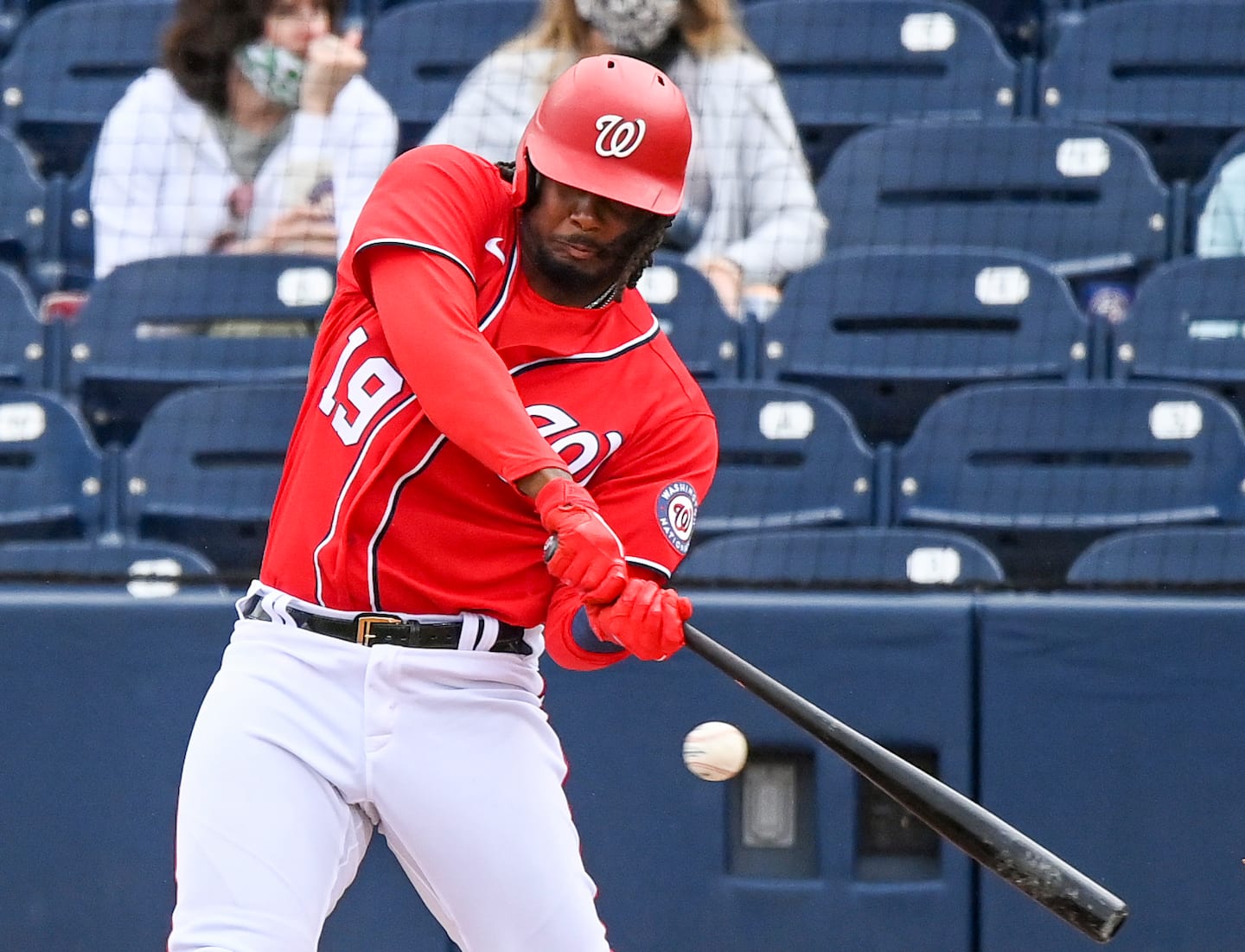 Ryan Zimmerman goes 0 for 4, and 0 for 2 with runners in scoring position, on Sunday? Bell and Schwarber will debut soon.

The offense is shut out for the third time in six games, has 10 extra-base hits to 41 singles and has gotten power from two players — Juan Soto and Trea Turner — and no one else? Bell and Schwarber will debut soon.

And by Monday afternoon, Bell, Schwarber and Josh Harrison were activated off the coronavirus-related injured list. To make room on the roster, the Nationals optioned infielder Luis García and outfielder Yadiel Hernandez and designated catcher Jonathan Lucroy for assignment. Then Manager Dave Martinez put Bell, Schwarber and Harrison right into the lineup — hitting fourth, fifth and seventh — to face the St. Louis Cardinals and starter John Gant at Busch Stadium. Their bats have been needed badly.

Without Bell, Martinez had leaned heavily on the 36-year-old Zimmerman at first base. Without Schwarber, he played a mix of Andrew Stevenson and Hernandez in left. Without Harrison, he used Mercer, Hernán Pérez and the 20-year-old García at second. The offensive drop-offs were incredibly steep. Bell and Schwarber, in particular, couldn’t debut soon enough.

“We were there every game, it seemed like — just one or two hits away,” Bell said Monday afternoon, a few hours before first pitch in St. Louis. “So I don’t have to put any pressure on myself. I don’t have to hit a nine-run home run by any means. It’s pass the baton. I got one heck of a lineup around me.”

In December, the Nationals traded pitchers Wil Crowe and Eddy Yean to acquire Bell, 28, from the Pittsburgh Pirates. About two weeks later, they signed Schwarber, also 28, to a one-year contract worth $10 million. Both were added to provide power behind Turner and Soto. Both are also coming off down seasons, which could predict their immediate futures or be explained away by a small-sample-size argument.

The Nationals are banking on the latter. The early results will turn up soon. While isolated, Bell hit off a machine that spit out small Wiffle balls at high velocity. Schwarber had a batting tee and weights delivered to his home, and he even used a virtual reality headset to visualize pitches and take dry cuts against them. However they look in their first few games, the upcoming lineups will be a lot different from what Dodgers starters Walker Buehler, Julio Urías and Clayton Kershaw carved through in Los Angeles.

Here’s the order that fell 3-0 to the Dodgers and Kershaw on Sunday:

Bell, a switch hitter, replaces Zimmerman, who becomes a valuable pinch hitter/late-game defensive sub. Schwarber, a noted left-handed power bat, replaces Stevenson or Hernandez, who have a combined 290 career plate appearances (254 for Stevenson, 36 for Hernandez). Harrison replaces Mercer, who split 10 games between the Detroit Tigers and New York Yankees in 2020 and hasn’t been a regular since 2018.

The lineup lengthens. The bench deepens. There is, in theory, better protection for Soto. The 22-year-old has already walked in one-fifth of his 25 plate appearances, the same rate at which he finished last summer. Two of the walks were intentional with Zimmerman behind him. Yet with Bell and Schwarber on the roster, Martinez can surround Soto in a variety of ways.

He can sandwich Soto between Turner and Bell, keeping Turner in the second spot and putting Bell fourth (as he did Monday). Or he could bump Soto up to second, hit Turner third and use Bell fourth, protecting his best batter (Soto) with his next-best batter (Turner) and using high-power potential (Bell) to support them both. That last look is something Martinez and hitting coach Kevin Long discussed in spring. Martinez even called it ideal on a few occasions.

The key then was whether Robles could be an effective leadoff hitter. The key now is having Bell and Schwarber on the field.